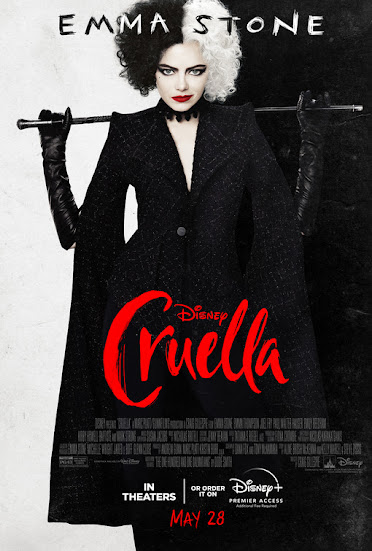 An origin movie for Disney villain Cruella DeVil does not sound like an intriguing prospect. We don't need to know the backstory of every villain. Exploring the past of Darth Vader or The Wicked Witch of the West didn't yield extraordinary results. It merely resulted in turning villains that thrive on their mystique into a bunch of tidy trivia facts, as if these origin movies were patterned off of Fred Astaire explaining why Santa goes down chimneys and wears a red suit in Santa Claus is Coming to Town. Sometimes, the past is left there, in the past.

Surprisingly, though, Cruella ends up being the rare villain origin story movie that actually works. Director Craig Gillespie and company have managed to avoid falling into the pitfalls of lackluster examples of prequels simply by making sure this story can work on its merits. Cruella doesn't feel like a bunch of 101 Dalmations fan-service masquerading as a movie, it's just something fun anyone can watch.

Cruella begins by exploring the tragic childhood of its titular lead, who was named Estella as a kid. Because this is a mainstream American movie trying to convey a sense of "edginess", this childhood is accompanied by fourth-wall-breaking narration from the adult version of Cruella (portrayed by Emma Stone). Since she was a kid, Estella harbored dreams of being a fashion designer, but she also had an extreme streak that her mother kept trying to simmer down. Once her mom abruptly exits the picture, Estella moves to London and lives with two pickpockets, Horace (Paul Walter Hauser) and Jasper (Joel Fry). The trio is an unlikely gaggle of companions but they do end up establishing a makeshift family.

Eventually, Estella gets her chance to work for the most in-demand fashion designer in all of London, Baroness von Hellman (Emma Thompson). She's casually cruel, aloof, doesn't care about anyone else, and is also a genius when it comes to designing clothes. Estella simply must work for her. But as she works herself to the bone as Hellman's faithful assistant, Estella soon gets an inkling to work outside of Hellman's shadow. Thus, Estella unleashes that cruel side of herself she's kept harbored up for so long, dubbed Cruella, as a new fashion icon who can take London by storm.

If anyone's watched the original 101 Dalmations cartoon or read the original Dodie Smith novel, it may be amusing just how far Cruella deviates from anything resembling previously established lore related to the character of Cruella DeVil. However, that's one of the best parts of the screenplay credited to Dana Fox and Tony McNamara. Instead of being beholden to an earlier Disney film, Cruella has the freedom to go wherever it pleases. Setting the film against the 1970s punk rock movement, for example, isn't an extension of the original cartoon's story or even a nod to when it was released (1961, for the record).

It's a unique stroke from Cruella's imagination that's done to allow for unique touches in the costume and production designs rather than to rigidly recreate the past. Plus, reimagining Cruella as a person torn by her obligations to different people (Hellman, her deceased mother, her friends, etc.) as she navigates her identity is a great way to reimagine a Disney villain whose prior defining trait was "loves to murder puppies." Plus, it's fun that the script always allows Cruella to be weird in a very specific way, like grabbing business cards with her teeth or slurping up slices of bananas that have fallen atop her cheek.

In another pleasant surprise, McNamara and Fox's writing largely eschews action sequences, save for brief bursts of slapstick at two big fancy parties. Unlike many modern Disney tentpoles, Cruella is all about witty barbs, heists, and grandiose displays of fashion. Committing to this throughout the whole movie rather than dovetailing into generic action beats in the third act is laudable. It's even more enjoyable since the film puts the more intimate gaze to good use. Emma Stone and Emma Thompson both flourish over getting to actually act against other human beings rather than a tennis ball standing in for a CGI character.

Stone lends tangible humanity to the various stages of Cruella's self-exploration, particularly in an extended single-take sequence late in the film where Stone shines at conveying complicated feelings without overplaying her facial expressions. Meanwhile, Thompson's deliciously self-assured wickedness made me long for more straight-up baddies in Disney fare. No more of these villains who suddenly become heroes in the third act or secret baddies nonsense! Gimme more Disney villains like Hellman that are just enjoyably despicable all the way through! Especially when they're played with such vigor by someone like Thompson!

Of course, Cruella has its fair share of drawbacks. For one thing, though the film is much more original than your average live-action remake of a Disney cartoon, it does have several derivative qualities. Chiefly, the wall-to-wall presence of 1970s pop songs on the soundtrack inevitably uses a lot of familiar needle drops, including a closing tune that made me chuckle in its obviousness. The feature as a whole also runs too long and has a handful of predictable story beats that feel out of place in a film that thrives on cheekily working against your expectations.

Still, on the whole, Cruella is quite an enjoyable experience and will make for a great introduction to 1970s punk rock for youngsters. Jenny Beavan's costumes are glorious, the cast (including yet another superb supporting turn from Paul Walter Hauser) is extremely fun, and it's all even shot distinctly like a movie! Gillespie captures things with plenty of wide shots and crisp editing, a far cry from the disorientingly-realized filmmaking in, say, Beauty and the Beast. An origin movie for Cruella DeVil sounded like a terrible idea, but in execution, Cruella leaves most other villain origin story movies in the dust.