The Human Factor is a straightforward but informative documentary 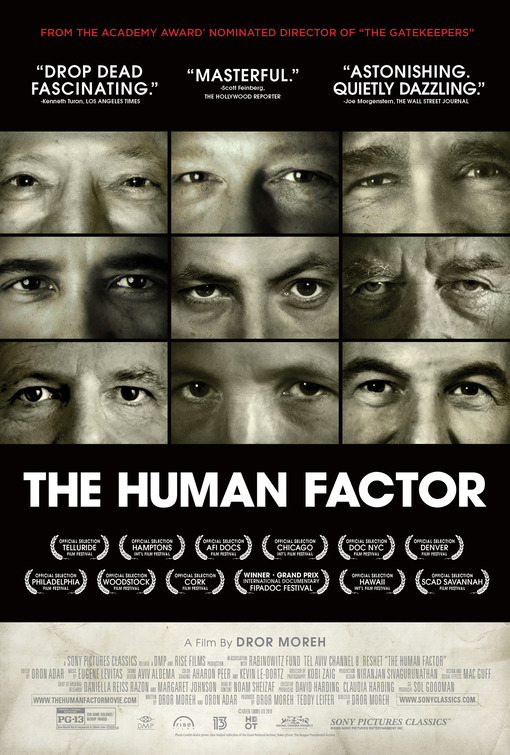 The new documentary The Human Factor from director Dror Moreh is an examination of the Israeli-Palestinian conflict, specifically during the 1990s through the Bill Clinton U.S. presidential administration. Told through interviews with American negotiators tasked with guiding interactions between world interviews, these individuals recount how the American government tried to guide peace talks between Yitzhak Rabin and Yasser Arafat, the leaders of Israel and Palestine. Initial hope for cooperation in these interactions becomes more frayed once Rabin is assassinated. This begins a string of setbacks that the negotiators look back on with a confluence of emotions, but above all, disappointment over how this went awry.

Choosing to tell this portion of the history of this long-standing conflict through the eyes of negotiators is an interesting move on the part of Moreh. For someone like myself that doesn't have much in the way of knowledge on this issue in the 1990s, let alone its long-term history, these third-party points-of-view do make for an easy audience entry point. Plus, the decades of removal from the events chronicled lead to a welcome sense of honesty. This is not a documentary that's all about back pats, it's about men like Martin Indyk and Dennis Ross looking in the rearview at what went wrong here. There's also a touch of intriguing regret over the hubris of America thinking it could automatically solve all this long-standing tension.

At one point in the film's runtime, one of the interview subjects expresses sympathy for Arafat, who, in the late 1990s, began to feel that America and Israel were looking to sabotage him. The narrator for this anecdote notes that he feels sorry for Arafat since the lack of Palestinian negotiators in the proceedings likely fueled this perception. It's a considerate thought but it did make me suddenly aware of how the film itself lacked a specifically Palestinian perspective. While the focus on just interviewing American negotiators involved in this affair means Human Factor can't interview Palestinian individuals, surely some archival footage or other means could have been used to inject this point-of-view into the proceedings.

What people we do get to hear from provide insightful gazes into these negotiations while also providing historical context in a concise manner. These stories are told through a form that's quite straightforward for a political documentary. Talking heads get intercut with historical footage, a handful of original visual aids, the only thing missing is a famous celebrity providing narration. The straightforward execution of this material is thoroughly competent and it's easy to see how providing extreme variations on documentary norms could''ve provided extra distractions, rather than enhancements, to a movie handling such gravely serious subject matter.

Still, making things so uniformly adherent to convention on a filmmaking level does render Human Factor informational but not quite captivating. The most engaging moments are where the interview subjects express overt displays of emotion, particularly in regards to their somber recollections of where they were when they heard that Rabin was assassinated. There's a constant emphasis in their remarks about the importance of maintaining a third-party perspective in the act of negotiating, it's imperative when handling discussions between world powers. This makes this very specific display of sorrow especially impactful.

Also proving memorable are the comments made by Dennis Ross, the frankest fellow in a gaggle of negotiators who aren't known for mincing their words. His candor takes on a fascinating self-reflective quality as The Human Factor heads into its final twenty minutes, as he gets frank about the failures of both America and himself during the last attempts at broaching the Israeli-Palestinian conflict in the Clinton administration. "What could have been?" is a question that weighs heavily on the mind of Ross and it also informs the melancholy tone of The Human Factor. Though not as expansive in scope or innovative in filmmaking as it could have been, this documentary still functions fine at a groundbreaking historical event that never was.

Posted by Douglas Laman (NerdInTheBasement) at 9:07 AM