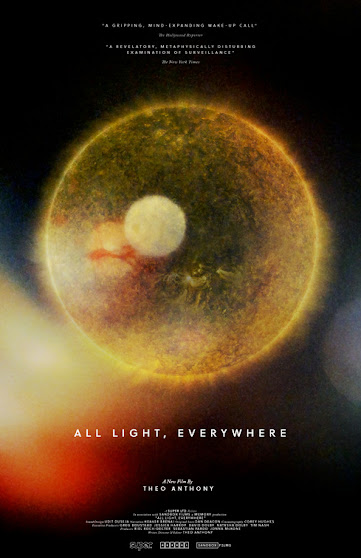 As the documentary All Light Everywhere begins, we're informed that the human eye has a natural blind spot. This aspect of human vision is represented throughout the movie by narration from Keaver Brenai. From here, this aspect of sight is used as a leaping-off point for a larger examination of how we see things through objects like cameras. Much of the focus is centered on body cameras, and how these items, meant to provide an "objective" view of interactions between cops and citizens, actually can provide a warped depiction of things thanks to details like a skewed wide-angle lens. Various accounts are also referenced about how a person's seemingly "objective" perspective through cameras or observation has been skewed throughout history.

There's something quite chilling about the starting concept of All Light Everywhere, which is made all the more unnerving by how calm the production is. This isn't a movie looking to start a panic through blaring noises and an overabundance of visual stimulation. It just plainly lays out shortcomings about modern forms of observation, such as God's-eye-view perspectives from drones, and how those feed into larger biases. All of this is cemented through Brenai's narration, which has this monotone quality that can be eerie. Paradoxically, though, it can also be strangely calm since it provides a rare sense of constant reliability throughout the runtime.

Director Theo Anthony captures these ruminations on human viewpoints with a dream-like quality in certain segments, particularly in any of the digressions to historical examples. At times, it feels as if we're being led to a higher plane of consciousness, one that simultaneously enchants the mind but also confounds it. All the while, Anthony's filmmaking style challenges us to comprehend what we're witnessing on-screen, an appropriate goal for a film that's all about making us think twice about what our perspective entails. This style of directing won't be to everyone's tastes but the boldness here should be universally admired.

Parred-down realism is incorporated into sequences that are just about capturing people talk about modern forms of "seeing" like body cameras. These include a bunch of rookie cops being told how to uses the devices as well as a meeting with a largely Black group of Baltimore, Maryland residents who are being asked for feedback on 24/7 aerial surveillance of the area. In the latter segment, the most pressing details about "perspectives" are made apparent, namely how warped biases in how we view things can help contribute to systemic racism against people of color. In these extended discussions, the human cost in detached endeavors like aerial surveillance is made apparent.

Whereas there's a dreamlike quality in the explorations of the past, segments set firmly in the present in All Light Everywhere emphasize realism. On-camera subjects talk for prolonged periods of time, there are very natural moments of people arguing back-and-forth, at times it feels like we're in the same room as these individuals. While the most lucid parts of All Light Everywhere remind the viewer they're watching a film, these grounded sequences trick the mind into thinking they're immersed in reality itself. The fluidity in styles of filmmaking nicely reflects the variety of images that can pass our eyes on a given day.

Dan Deacon's constantly humming and frequently unsettling score compliments both the ominous tone and thoughtfulness that permeates all of All Light Everywhere. As this feature bridges the gap between avant-garde and more realistic documentaries, the viewer is left with plenty of food for thought to chew over. What unique elements influence our own viewpoints? Is there such a thing as an "objective" perspective? How do modern forms of "sight" adversely impact marginalized groups? These are all heavy topics packaged up in the complicated but thought-provoking filmmaker of All Light Everywhere.

Posted by Douglas Laman (NerdInTheBasement) at 11:46 AM