Secrets & Lies is a restrained triumph 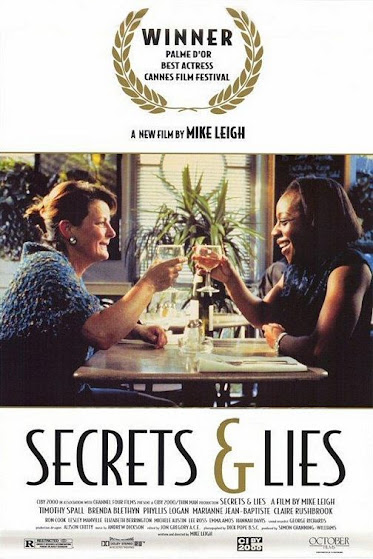 I stumbled onto Secrets & Lies on HBO Max purely by accident. I recognized Mike Leigh's name on it, of course, having already seen Happy-Go-Lucky and Vera Drake, so that caught my eye. Then I saw that everyone I knew absolutely loved this movie. So I decided to spend a Friday night, as one in their mid-20s would do, watching Secrets & Lies for the first time. Even with my prior experience and adoration of Leigh's work, I was still so blown away by Secrets & Lies. The restraint Leigh imbues into all his works is especially exquisite in its execution here. Down-to-Earth humanity becomes outright captivating in Secrets & Lies.

In the wake of her adopted mother's funeral, Hortense Cumberbatch (Marianne Jean-Baptiste) has decided to go searching for answers as to who her biological mother actually is. Upon going down that rabbit hole, she discovers that her mom is Cynthia Rose Purley (Brenda Blythen), a woman in her 40s living in a small home whose life is far from ideal. This is especially true when compared to the comparatively more lavish life her brother, photographer Maurice Purley (Timothy Spall), leads. Her life is about to get a whole lot more complicated when Hortense rings her up and asks to meet her. Cynthia's past is now coming back in ways she could never have expected and will, inevitably, change her world forever.

Leigh takes his time with Secrets & Lies, refusing to rush in on anything. Instead, much of the first half of the movie is dedicated to exploring the everyday lives of our principal characters. We see a couple of montages of customer Maurice works with at his job. We watch Hortense talking with a friend over what it's like to want to know her biological mom. We witness the troubles at home Maurice has in connecting with his wife, Monica (Phyllis Logan), as well as similar domestic turmoil between Cynthia and her daughter Roxanne (Claire Rushbrook). It's all so subdued but it's always dramatically compelling.

Giving us plenty of time to know these people in their day-to-day lives establishes a firm sense of normalcy that the return of Hortense into the life of Cynthia can then disrupt.  Plus, it helps that these low-key sequences are anchored by such richly detailed performers. The likes of Spall or Marianne-Baptiste are transfixing under any circumstances. Of course they're able to grab your attention here in Secrets & Lies with the most casual of conversations. Keeping these ingredients at the forefront of Secrets & Lies makes the whole affair so engrossing and that only becomes more true as the secrets begin to increase in size as the story goes on.

Many of the restrained conversations in Secrets & Lies are captured through equally measured camerawork. Leigh will often keep the camera rolling on a shot for a prolonged period of time as we watch two or more people bounce off one another in real-time. Without any edits to disrupt the flow or tone of these exchanges, scenes like Cynthia and Hortense meeting face-to-face for the first time can play out with their maximum emotional power. Best of all, one even forgets about Leigh capturing these scenes in a single take as they're happening. The dialogue and performances are so gripping that the unique visual attributes work in service of them rather than distract.

Especially impressive among these types of scenes is a late shot depicting all the principal and supporting characters sitting down for a barbeque. In a wider shot, we see everyone walking back and forth from the grill to the table, people handing food to other people, and all kinds of other normal behavior for this kind of outdoor event. It's all so naturalistic with equally authentic blocking that must have taken forever to arrange. The realism that fuels both the drama and the captivating nature of Secrets & Lies is especially apparent here. Leigh's commitment to unique visual and acting traits is incredible, particularly in how both elements convey such achingly human qualities you can't look away from.