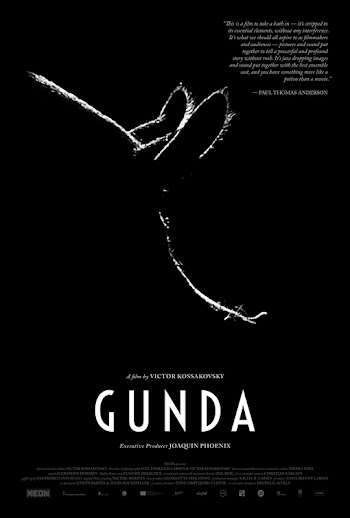 Gunda is simple. This is a black-and-white documentary about farm animals. We start by watching a newborn litter of pigs struggling to suckle from their mother. From there, we watch the pigs slightly grow up as they traipse around their small pen and nearby farmland. We also get brief digressions involving a one-legged rooster and also a whole bunch of cows.  But for the most part, director Victor Kossakovsky keeps the focus exclusively on the pigs. All the while, everything is presented with no music, no narration, and it's also all in black-and-white. If I didn't know any better, I'd say Gunda was meant to be a parody of avant-garde documentaries!

But this is certainly a project that's meant to be taken seriously. Surprisingly, this does end up working, mostly because of how easy it is for humans to anthropomorphize things. While making the movie WALL-E, director Andrew Stanton commented on this phenomenon and how people will inevitably interpret whatever they want onto babies, pets, and other similar creatures. It's just in our DNA to imprint distinctly human emotions onto entities that can't quite speak for themselves, especially when they find other ways to be so expressive. Thus, the lack of narration or a concrete plot becomes no hurdle in watching Gunda.

On the contrary, Kossakovsky's commitment to keeping everything so devoid of larger-scale conflict or traditional documentary trappings allows one to immerse themselves in and begin to interpret human emotions into the lives of these farm animals. Two squabbling piglets can't help but remind the viewer of a typical instance of human siblings arguing. A memorable early scene of a momma pig digging through the hay with her snout to rescue a stuck piglet will inevitably inspire moviegoers to go "awww" while chuckling about the monotonous ways moms have to help their youngsters. Even while stripping down this movie to the bone, Kossaovsky manages to have Gunda be a great example of seeing human behavior in animals we take for granted.

This also extends to other animals we see briefly glimpse at in the runtime, particularly that one-legged rooster. Every time he opened his mouth in what looked like a shocked expression, my heart melted. He's in such wonder of the world around him! All those expressions are captured through camerawork that impresses the more I ruminate on it. How did Kossakovsky and his team exhibit the kind of patience necessary to capture the everyday behavior of farm animals through skilled camerawork and editing? It's easy to imagine a movie that's just jaggedly cobbled together fragments of footage because of how unruly animals can be. But there's a constant visual clarity that never interrupts the inherent naturalism of the piece.

Gunda does such exquisite work of getting the viewer to just lay back and chill with the barn animals that it just makes his final emotionally devastating rug pull all the more powerful. An extended single-take that closes out the movie doesn't suddenly immerse the viewer in graphic imagery but the mere suggestion of obvious turmoil comes across as such a harrowing blow to the established norms of this movie. It may just be one of the most heart-breaking sequences to ever emerge in a G-rated movie. Gunda and its extremely languid tendencies aren't going to be for everyone, it'll surely frustrate as many viewers as it captivates. But the emotional impact of that ending solidified for me that Gunda had worked magic in using a totally unique filmmaking style to unearth the humanity in barn animals.