The SpongeBob Movie: Sponge on the Run focuses too much on the past to its own detriment 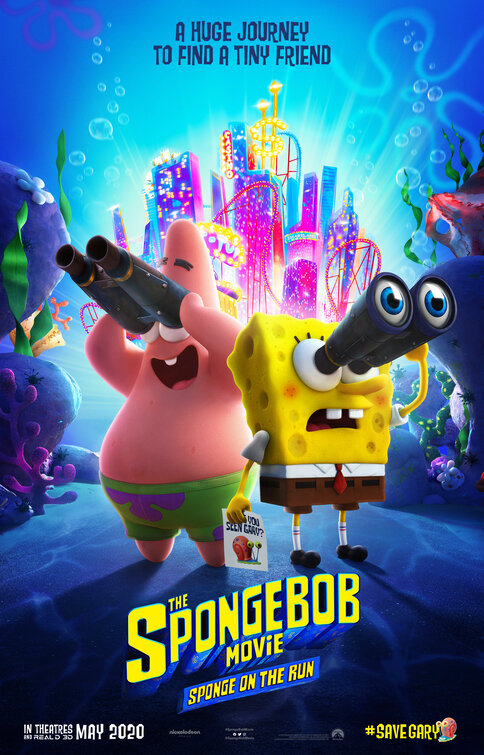 I haven't watched SpongeBob SquarePants in years. It was a formative part of my childhood and I still quote classic episodes and that first movie all the time. But I couldn't tell you the last new episode of the show I actually watched. Despite having been absent from Bikini Bottom for so long, this whole universe came flooding back to me as The SpongeBob Movie: Sponge on the Run began. Much like riding a bicycle, the world of SpongeBob is just something you don't forget. It felt momentarily nice to return to something so familiar. Too bad the rest of the movie just isn't anything special. No amount of nostalgia could liven up this production.

Sponge on the Run, the third feature-length adventure starring SpongeBob (Tom Kenny), see's Plankton (Mr. Lawrence) deciding that the absorbent fry cook is the whole reason he can't secure that Krabby Patty Secret Formula. In response, he steals SpongeBob's pet snail Gary and sends him off to King Poseidon in Atlantic City. SpongeBob and Patrick set off to retrieve the mollusk, a journey Plankton is sure the duo will never return from, thus ensuring he can get the secret formula back. What follows is a road trip where two best buddies will try their best to stay on their mission without getting distracted. Meanwhile, the denizens of Bikini Bottom will start to realize how important that peppy square really is.

SpongeBob SquarePants was always defined by comedic absurdity. This was a show where episodes could end with a gorilla riding a horse off into the sunset or could feature casual jokes about husbands being turned into lamps. Sponge on the Run tries to capture this level of ridiculousness and occasionally succeeds. The best-extended gag in the whole film involves SpongeBob and Patrick inadvertently killing a demon creature just by fiddling around with curtains. Meanwhile, the sight of Keanu Reeves as a tumbleweed followed shortly by a bunch of cactus singing a reprise of Gary Wright's Dream Weaver will make both five-year-olds and stoned adults giggle.

Unfortunately, too many of the gags in Sponge on the Run are never as over-the-top as they could be. To boot, the movie keeps reminding you of past SpongeBob productions so much that it rarely yahs the audacity to do something new, something fresh. As a result, you can't help but realize how comparatively restrained Sponge on the Run is. Nothing in here matches the bizarre sight of SpongeBob and Patrick just spewing tears into each other's mouths or Patrick randomly showing up in high heels and fishnets. It's not that Sponge on the Run needed to replicate the past, it just needed to find its own demented groove and it never gets there.

Part of the problem is the animation, which brings SpongeBob and pals into three-dimension through computer-animation. The team at Mikros Animation have done a solid job translating this world into a CGI domain that evokes the look and feel of stop-motion. Still, the inevitable restrains of CG compared to 2D animation means Sponge on the Run can only do so much visually. There's just not enough flexibility with these character models to allow for truly zany facial expressions or sight gags. It's another instance of Sponge on the Run trying to channel the lunacy of past SpongeBob productions, only to find its reach far exceeding its grasp.

Sponge on the Run's problems with executing comedy becomes especially apparent in the last twenty minutes when writer/director Tim Hill decides to take an abrupt swerve into an ocean of sentimentality. A series of flashbacks that also serve as an extended advertisement for that new Kamp Koral prequel show try their best to tug at your heartstrings. Instead, the movie merely grasps at straws. The story hasn't earned this level of poignancy and the ham-fisted dialogue just beats you over the head with the moral of the overall feature. Don't people watch SpongeBob for the gags? These kinds of decisions serve as an anchor that drags Sponge on the Run down. It's not terrible, but I doubt it's a movie that will truly satisfy either SpongeBob fans or just kids looking for a new comedy to watch.