Anvil! The Story of Anvil is a rock documentary with heart to spare 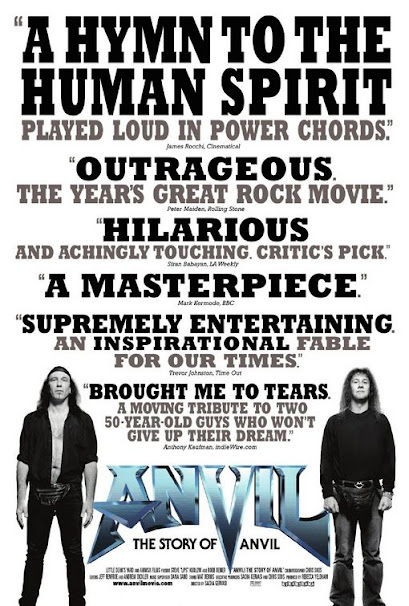 In 1984, a gaggle of rock bands came to Japan and just crushed it, their performances slayed the crowd. Among those on the stage were Bon Jovi, Scorpions, and a Canadian metal band by the name of Anvil. The group, whose lead members were singer and guitarist Steve "Lips" Kudlow and drummer Robb Reiner, was full of outrageous attitude and guitar-playing that was dynamite. The other bands that performed that day went on to iconic careers. Anvil, meanwhile, faded into obscurity. Anvil! The Story of Anvil is a documentary that chronicles Kudlow and Reiner from 2005 and 2007 as they try their hardest to get their band to the next level of fame.

In the modern world, Kudlow works as a driver for Children's Choice Charity while Reiner is in the construction business. They're not the most glamorous jobs but they put food on the table for their respective families. When they're not at those jobs, Anvil still delivers performances at any venue that'll host them. Though they never get the biggest crowds, but Kudlow is certain that Anvil can still knock the world off its socks. Anvil gets a chance to prove that there's still a place for them in the modern music scene when they get the chance to tour Europe. Maybe this is the big break they're looking for...or maybe it's another dead-end for a band that just can't catch a break.

As a post-credits still image from the 1980s makes clear, director Sacha Gervasi is a big Anvil fan himself. However, he's not making Anvil! The Story of Anvil as a rose-tinted promotional video. Gervasi's camera refuses to sand off the edges of the hardships this band goes through, especially in their ill-fated European tour. After making it clear how much this tour means for Kudlow and Reiner, your heart just breaks as Gervasi captures incidents like a manager refusing to pay Anvil for their performance. Every missed train, every small crowd, every new bump in the road for the band Anvil is put on full display.

In the process, Gervasi makes the sheer endurance of these band members something that's impossible not to get wrapped up in. It's been a while since I was as captivated by a movie as I was with Anvil! and that quality of endurance is a key reason why I was riveted. The members of Anvil have been performing for decades, faced with all kinds of struggles, and yet they still go out there and give each show their all? That's impressive. Through highlighting the turmoils in Anvil!, Gervasi is able to render the people in this band as just that, complex human beings. He also accomplishes this by allowing the production to slow down and giving us moments to know the intimate day-to-day lives of Anvil's members, like when we get to see Reiner's garage covered in his own paintings.

Through painting Anvil's participants in such a richly detailed manner, the viewer becomes as enamored with these musicians as Gervasi and other Anvil die-hards. Both the emphasis on hardship and the intimate nature of Anvil! also ensure that the moments of true connection between Kudlow and Reiner are incredibly touching. Like so much of Anvil!, their friendship isn't depicted as idyllic. They fight, they argue, they seem like they'll never get back together again. But decades of friendship have cemented a bond here that endures even in their most fraught moments. When Reiner notes that he'd catch Kudlow if he ever threw himself off a cliff, how can you not get a lump in your throat?

Those are the kind of moments that lend such rich humanity to this underdog musical tale. Anvil! is many things at once. It's a comedy, it's a documentary, it's a showcase for some memorable tunes. Above all though, it's a salute to those who refuse to abandon their ambitions as well as a reminder of what really matters. As Ludlow notes in his closing narration, people, whether they're your family or bandmates, are what make life worthwhile. You can have fame and fortune, but what good is it without people to share it with? The band at the center of Anvil! The Story of Anvil may have never become icons on par with Kiss, but Ludlow and Reiner do have their friendship. Maybe, as this documentary poignantly reflects, that's enough.