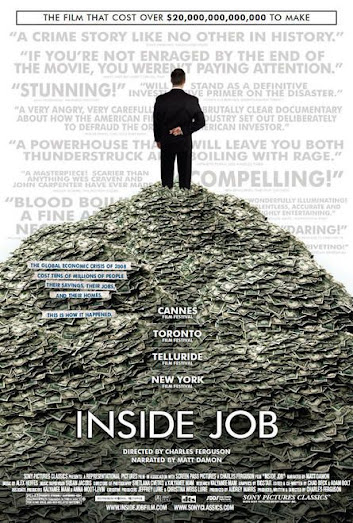 When doing a documentary on a then-current event issue, you do run the risk of becoming dated. It's a danger associated with any film, but for docs, in particular, a project can quickly age about as well as milk on the counter. Maybe the public perception of your subject matter changed drastically. Maybe new details rendered your depiction of this issue moot. Maybe, removed from the immediacy of this event, the documentary simply doesn't hold up as its own piece of filmmaking. Those are all valid concerns but they don't apply to the Oscar-winning documentary Inside Job. Not only is it well-made enough to capture your attention under any circumstances but the horrors it depicts have only gotten worse in the decade since its release.

Inside Job is about the 2008 global recession and the events that led to Wall Street bankers nearly taking not just the American economy but the global economy. Through director Charles Ferguson and narration provided by Matt Damon, Inside Job guides the viewer through a world of corruption that didn't just come out of nowhere at the end of the 2000s. Moviegoers get a detailed but not overwhelmingly intricate portrait of how this recession was long-in-the-making. This is thanks to decades of shady actions on behalf of large banks and a lack of government oversight. Seeing it all laid out like this is enough to get your jaw to drop and your blood to boil.

All of that information is nicely conveyed through both handy visual aids and also a sense of brevity on the part of Ferguson as a filmmaker. He realizes that dumping every bit of bank lingo won't really help the viewer understand the bigger picture behind the economic crisis of 2008. Instead, he portrays the heart rather than the numbers of this matter. We see C-SPAN footage of testimony from bank executives shirking responsibility for their actions while late in the game we witness footage of everyday people piling up in tents now that their houses have been foreclosed in the wake of economic turmoil.

Human beings are the focus here, not being suffocatingly detailed. It's a decision that keeps Inside Job light on its feet, easy to watch but still incredibly informative. When I say this production is "easy to watch", I mean that. A montage sequence in Inside Job depicting various corrpt bank executives getting arrested set to the tune of Takin' Care of Business is ridiculously fun to watch in addition to making your brain break in terms of just how many people in this industry are responsible for wrecking people's lives. Equal parts entertainment and equal parts rage-inducing call to action, the scene is Inside Job in a nutshell.

The most appropriately cutting parts of Inside Job come in its final half-hour, as Ferguson's interviews with various people connected to either the U.S. government's financial sector, financial institutions at colleges or big banks go incredibly sour. Professors get snippy, former chairmen go totally quiet. You can tell Ferguson's filmmaking is doing something right by getting such powerful people to clam up. This digression revolves around how colleges ruled over by people who normalized shady Wall Street behavior are now teaching the next generation to screw over the public. The horrors that led to the 2008 economic crash weren't limited to New York, they're also spread across the country.

Inside Job's way of showing how these practices are still being normalized for the future is one of the key ways it remains tragically relevant in addition to the fact that economic inequality has only grown in scale in the years since its release. No dated documentary filmmaking to be found here, Inside Job is as well-made and urgently important as ever.