Take a big o'l swig of remarkable filmmaking with Another Round 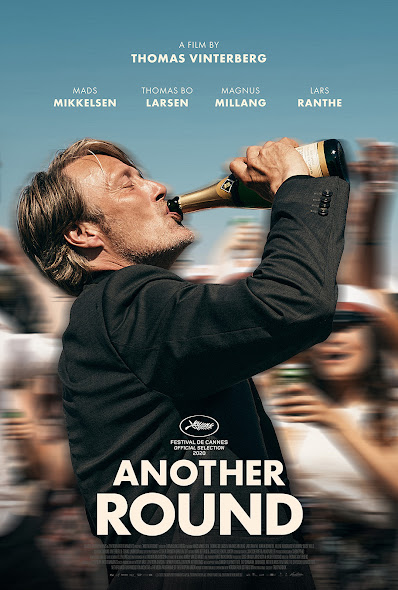 In American cinema, Mads Mikkelsen always plays characters who are aberrations. With his distinct accent and equally unique screen presence, Mikkelsen can't help but attract your attention as something unusual you must keep an eye on. A number of big blockbusters have utilized that to make him an eye-catching baddie for James Bond and Doctor Strange to fight. But in his home country of Denmark, Mikkelsen's able to play characters who are just everymen. He's no longer the lone person with a Danish accent in an American/British feature. He's just another guy, which is an avenue Mikkelsen can also play incredibly well (is there anything this guy can't do?)

In Another Round, Mikkelsen plays Martin, a school teacher whose wife could stand some improvement. He barely engages with his students, he and his wife are on rocky terms, it just feels like, as he this middle-age, that life has already stopped. He and three of his co-workers decide to spice things up by engaging in a pact. Taking inspiration from psychiatrist Finn Skårderud, Martin and his friends will constantly drink to ensure that their Blood Alcohol Level is always at 0.5%. Skårderud theorized that this makes people more relaxed and willing to embrace bold choices. What's the harm in trying to inject some fun (and booze) into their lives?

Writers Tobias Lindholm and Thomas Vinterburg (the latter of whom also directs) have hatched a fantastic premise for a movie that they manage to execute with grace. There aren't any half-measures here in terms of realizing such a bold storyline. Lindholm and Vinterburg embrace all the complicated emotions inherent in living a life constantly intoxicated. Best of all, they keep the audience constantly questioning what we should be feeling. Should we be excited that Martin's life is opening up thanks to his persistent alcohol consumption? Should we handwave away the initial signs of trouble? Another Round masterfully challenges the audience without ever sacrificing our genuine emotional connection to the characters. What a hat trick!

Part of how the characters maintain such an engaging quality is because of the similarly layered performances from the lead actors. All four of our main guys maintain a down-to-Earth nature that makes their plight easy to invest in. Similarly, they portray the inebriated nature of their respective roles with equal levels of authenticity. On a character level, it's also smart for Lindholm and Vinterburg to not make the day-to-day lives of Martin and company wrought with over-the-top melodrama. These guys aren't looking for an escape because every conceivable tragedy has befallen them. More mundane circumstances (troubles communicating with a spouse, awkward teaching experiences) inform their desire to find some form of release.

Through this method, both the performers and the audience have a discernible realistic entry point into a plotline that, on paper, sounds so ludicrous. On a visual level, Vinterburg's direction proves remarkable, especially his sparing but effective use of white text against a black background to represent either Blood Alcohol Levels increasing or the characters writing an academic study about their outlandish "experiment". I also appreciate how Vinterburg's filmmaking can so effortlessly capture the drunken state of Martin and his companions either through a filter of dark comedy or in a manner that emphasizes the gravity of their scenario.

This is especially true of youth soccer coach Tommy (Thomas Bo Larsen), who becomes the most alcohol-dependent of the main four characters. You can't help but chuckle at the dark comedy found in an early scene where he attempts to keep drinking without letting his adolescent players know what he's doing. However, a late scene where Martin checks in on Tommy while he's trying to go sober only for Tommy to constantly reach for a cold drink effectively gets you holding your breath. Vinterburg's careful framing and sense of staging in both sequences help to vividly render their distinct moods. In the process, Vinterburg creates a tone for Another Round that's as complex as its characters.

And then, of course, there's Mads Mikkelsen. Dating back to his days on Hannibal, I've been an easy sell for Mikkelsen but it's so fascinating to see him in a project that strips away any genre storytelling trappings. Mikkelsen is playing someone firmly grounded in reality here and it's the type of role that he can excel at. I especially love the way he portrays each new stage of Martin with constant levels of conviction. Thanks to Mikkelsen's range as an actor, the earliest buttoned-up version of Martin is just as believable as the one we see dancing on a pier in the climax. His dynamite lead performance in Another Round is just one of the many ways this movie thoroughly impresses.

Posted by Douglas Laman (NerdInTheBasement) at 10:09 AM