French Exit has only fleeting glimpses of artistic success 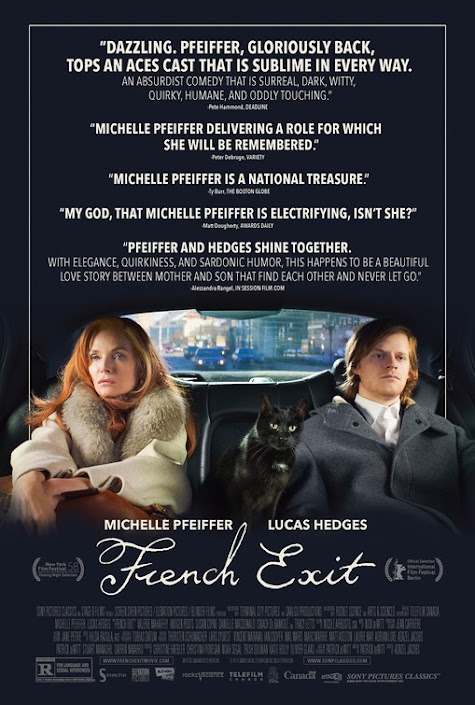 As French Exit begins, Frances Price (Michelle Pfieffer) has a problem. Her money has run out. She's a woman who's used to living in the lap of luxury in New York City so this is a bit of a problem for her. Looking for a new start, Price hops off to Paris, France with her son, Malcolm (Lucas Hedges), and her cat in tow. In these new surroundings, Frances has to make do with a new kind of life. She must befriend people she never would have befriended before, she even, eventually, must do without her cat. Through all these changes, maybe she'll get some kind of revelation about her life. Or maybe she'll remain the same o'l detached rich person she's always been.

French Exit is a classic example of a bunch of eccentricities searching for a movie to inhabit. There are strange qualities a-plenty in Patrick deWitt's screenplay, with the best of them, like an extended gag involving a frozen sex toy, making good use of understated responses from the characters. Too often, though, French Exit leans on oddball behavior so heavily that it becomes the entire crux of the piece. Too much of this behavior neither stimulates the mind nor tickles the funny bone. All the while, vacant characters played by talented actors walk around lavish Perisian homes in search of something to do. They never find what they're looking for.

Part of the issue is that the characters themselves could stand to be as distinctive as the most ludicrous moments of French Exit. Malcolm putting a napkin over his face to avoid a confrontation with his fiancee, Susan (Imogen Poots) is humorous, but that's the liveliest the character gets. Too often the character has no real personality to speak of. Susan, meanwhile, doesn't have a personality, she's just a standard Movie Girlfriend whose entire existence revolves around a male character. As for lead character, Frances Price, she's like the star of a bad Succession knock-off that wandered off-set. You further appreciate just how good the writing on that HBO show is when you see uninteresting takes on wealthy people going awry.

It's so hard to get invested on Price's story on any level beyond the fact that Michelle Pfieffer remains as compelling of a screen presence as ever. If French Exit consisted solely of Pfieffer dropping rude comments to people, I probably would have adored the whole movie. These biting remarks are delivered with such darkly humorous casualness by Pfieffer while her compelling nature as an actor makes the aloof nature of Frances Price easier to swallow. She's bringing her A-game to a movie that's barely got a pulse. It's a disappointment, though die-hard fans of Pfieffer as a performer will probably get their money's worth from her turn in French Exit.

Director Azazel Jacobs is the one behind the camera on French Exit, a puzzling choice for a movie with such stylized detours. By contrast, Jacobs has largely down subdued slice-of-life movies like The Lovers and Terri. Jacobs lends a visually competent look to French Exit leaning heavily on wide shots, but his direction often feels too restrained for its own good. The most peculiar scenes of French Exit, like a seance to communicate with Price's missing cat, are largely executed in a visually derivative way. These are the moments where I yearned for a filmmaker more experienced in stylized storytelling to be directing this film. A little more visual flourish could have helped make French Exit at least tantalizing as eye candy.

There are parts of French Exit that certainly work, particularly entertaining supporting performances from Danielle Macdonald and Susan Coyne. The fact that large sections of the movie are striving to center on unlikeable characters and unorthodox dark comedy is also an admirable choice. But admirable intent does not a cohesive movie make. In the end, French Exit only ends up being a few interesting pieces and a largely unsatisfying whole.