In Laman's Terms: Ten countries that have never been nominated for Best International Feature Film

"It's a little strange, but it's not a big deal...the Oscars are not an international film festival,  they're very local," - Bong Joon-ho circa. October 2019 on the Academy Awards and its longstanding reluctance to recognize foreign-language cinema

The Academy Awards have a lot of blindspots. Movies directed by filmmakers of color don't get anywhere near enough recognition. No documentary has ever been up for Best Picture. And then there's foreign-language cinema, which always struggles to get recognized at the Oscars outside of the Best International Feature Film (previously the Best Foreign Langauge Film) category. In recent years, the Oscars have improved in this department, with four foreign-language directors getting recognize at the last three Oscars ceremony. Oh, and a little movie called Parasite redefined the game by taking home the Best Picture trophy.

But that doesn't mean the Oscars have totally gotten over all of their foreign-language cinema biases. On the contrary, there's still a lot of hurdles to go when it comes to the Oscars fully recognizing all corners of world cinema, even in the Best International Feature Film category itself. You'd think this would be the oasis for all foreign-langauge cinema but a number of countries have faced difficulty getting recognized in this category ever since it was officially established in 1956. For instance, it's likely not a shock to discover that all but one of the ten most nominated countries in this category are ones with predominately white populations (Japan being the only holdout).

That's just the tip of the iceberg when it comes to the problems with the Academy Award's Best International Feature Film category, which has long ignored some of the most impactful film industries on the planet. In this piece, we'll look at ten countries that have never been nominated in the Best International Feature Film category. Through examining the unique film industries and submitted movies for each country, one can get a clearer picture of just what the Academy has snubbed for so long.

(One note before going forward: the process for determining The process for selecting nominees for Best International Feature Film begins with each country submitting one local movie to the Academy. From there, all those submissions are whittled down to a shortlist of 9-10 movies. Finally, five movies are chosen to be the nominees at that year's Academy Award ceremony.)

Portuguese has constantly submitted titles for Academy Award consideration dating back to 1980 when they submitted the film Morning Undersea. In fact, with 37 movies submitted for Oscar consideration over 40 years, Portugal holds the most distinction of being the country that's submitted the most movies to the Academy Awards without ever scoring an Oscar nomination. These submissions have included acclaimed titles Vitalina Varela and Alice. Portugal's exclusion is particularly interesting due to it being a European country and entries from that continent tend to dominate this category. Unfortunately, that tradition has not extended to works hailing from Portugal.

Cinema hailing from the continent of Africa has often struggled to garner much Academy Award recognition. In the history of the Best International Feature Film category, only 10 features hailing from a country located in Africa have managed to score a nomination. One of the many byproducts of this exclusion is that Egypt has never managed to score a nomination in this category. Interestingly, this is in spite of the Egyptian Academy submitting to the Oscars titles that aren't afraid to chase bold material. Whereas countries like China have often submitted sanitized movies for Oscar consideration, Egypt's Academy has openly endorsed controversial films like The Yacoubian Building. Such movies have generated their fair share of worldwide acclaim, but sadly, such provocative titles have not garnered the affection of the Academy Awards.

The film industry of the Philippines has, like any country (including America) had its fair share of struggles over the years. Specific troubles faced here include the fact that this industry ceased to exist ner the 1941-1945 Japanese Occupation as well as a period for much of the 1990s where the emphasis was placed on commercial films rather than artsier fare. Despite it all, the Philippines film industry has produced countless masterpieces, including the 1975 classic Manila in the Claws of Light. Unfortunately, the Philippines have also never managed to score a Best International Feature Film nomination. Partially this is due to some of countries' most acclaimed films (like Manilla) not even being submitted for consideration in the category. However, much of this exclusion lies in the Academy's long-standing difficulty with recognizing cinema starring and from Asian artists.

With the 2010 feature Uncle Boonmee Who Can Recall His Past Lives, Thai filmmaker Apichatpong Weerasethakul crafted one of the most acclaimed movies of that year. The surrealist storytelling here was challenging as it was engaging. Unfortunately, the Oscars have largely failed to recognize avant-garde narrative filmmaking even when it comes from America, let alone when it's in a foreign language. No wonder, then, that Uncle Boonmee failed to not only score a Best International Feature nod, it didn't even make that year's shortlist of contenders. It's a disappointing event that reflects the larger struggles that both Thai cinema and filmmaking from many Asian countries have faced in garnering Academy Awards recognition. No wonder, then, that Weerasethakul decided to stop being an Academy Awards voter, though that was due to struggles with the system of being a voter rather than directly connected to the Academy's inability to recognize Thai cinema.

Venezuela has submitted movies on-and-off to the Academy Awards since 1978, but they've never scored a nomination, though the 2014 submission The Liberator did make the shortlist for Best International Feature Film that year. Part of the issue has been that Venezuela was erratic in submitting titles to the Oscars during the countries golden age of cinema in the 1980s. Meanwhile, the 1990s saw them regularly sending off titles for Oscar consideration despite this being an era widely seen as a weaker period for Venezuelan cinema. Still, that discrepancy doesn't explain away why the resurging 21st-century Venezluen filmmaking scene hasn't been recognized by the Academy Awards. Meanwhile, the country's long history of being the home for acclaimed motion pictures like Isla de sal makes it extra baffling that the Academy Awards have never found a way to recognize Venezuelan filmmakers even outside of the Best International Feature Film category. 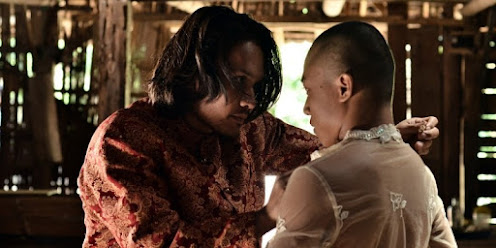 In a fascinating piece for Southeast Asia Globe, writer Mark Adnum does a deep-dive into the Indonesian film industry, which is in the middle of a resurgence. However, as Adnum notes, that industry struggled for much of the 20th-century, with the 1990s being a particularly grim period for locally-produced cinema. However, modern Indonesian cinema, as the author notes, is not short on gifted auteurs. That explains why, save for 2008 and 2015, Indonesia has submitted a feature film for consideration for the Academy Awards' Best International Feature annually since 2005. Unfortunately, the Oscars have failed to recognize this country's artistic contributions, which have included works like the critically-acclaimed 2018 movie Memories of my Body. Indonesia has stepped up its game considerably when it comes to filmmaking. Why isn't the Academy stepping up its own game by recognizing this country?

While Morocco has frequently been used as a lavish backdrop for American and European cinema, it's had far less luck scoring any kind of major Academy Awards recognition for its own cinema. The countries homegrown cinema dates back to 1958 while the country itself has offered up 16 submissions to the Academy Awards for its Best International Feature category. The closest the country's come to making it to the Oscars stage was with the film Omar Killed Me, which was one of 9 films shortlisted for the Best International Feature category in 2012. Otherwise, Morocco cinema has been largely ignored by the Academy Awards. In addition to the ceremony's own troubles with recognizing African cinema, Morocco's submissions to the Oscars have also struggled due to difficulties to make much noise at the pre-Oscar film festivals. A festival like Cannes can be where foreign-language titles leave a mark that lasts until award season, but much like the Oscars, such festivals have largely ignored modern Morocco films like The Unknown Saint.  The exclusionary practices of the Oscars are not just limited to that awards show.

Films hailing from the Dominican Republic have managed to make award season waves in some respects, such as the 2012 title Jaque Mate, which scored a handful of nominations at the Palm Springs International Film Festival and the Washington D.C. International Film Festival. Sadly, that same luck has not translated to the Academy Awards. Granted, the country has only made 10 submissions to the Academy Awards, with all but 3 of them being since 2010. Though this lower number of submissions makes their exclusion slightly less egregious, it's still disappointing that smaller film festivals have managed to recognize the Dominican Republic's contributions to cinema while the Academy Awards have constantly failed to do so.

To look at the history of Pakistan's film industry is akin to going on a rollercoaster; it's full of ups and downs. While the country has produced its fair share of classics, for decades, the Pakistani film industry ground to a halt. Let Nadeem F. Paracha from Dawn say it better than I ever could:

Contrary to popular belief, the collapse of the Pakistan film industry was not a gradual process. In fact the crumbling was a rather sudden happening. In July 1977 the populist regime of Zulfikar Ali Bhutto (Pakistan Peoples Party) was toppled in a military coup masterminded by General Ziaul Haq...Zia’s was a reactionary dictatorship...One cultural symptom of [the] social and cultural roll-back [in his dictatorship] was the abrupt collapse of the Pakistani film industry...Another prominent reason for the Pakistani film industry’s growing commercial and creative woes was the implementation of a new censor policy...By the early 2000s, an industry that once produced an average of 80 films annually was now struggling to even churn out more than two films a year...

With decades of turmoil for this industry, it's no wonder that Pakistan cinema never made it to the Academy Awards, especially since the country never even submitted features for Best International Feature consideration from 1963 to 2013. However, Pakistan has proceeded to submit a movie every year since 2013, including positively-reviewed features like Laal Kabootar. The rollercoaster ride that is the history of Pakistan's cinema has led to a modern-day film industry full of challenging and acclaimed features. It's time the Academy Awards recognized artistic works from a film industry that's managed to endure through incredible hardship.

New Zealand has left a pretty large imprint on the world of modern cinema. Not only is it the place where many blockbusters engage in principal photography, but iconic modern directors like Peter Jackson and Taika Waititi hail from this country. Yes, New Zealand has made an undeniably large impact on the medium of film...so how come the country's non-English language titles have been excluded from the Oscars? The Best International Feature Film category has never seen fit to nominate the six movies New Zealand has submitted for consideration in this category. Given the minimal amount of submissions and the fact that English-language titles from the country (like Whale Rider) have managed to garner Oscar nominations, New Zealands exclusion from this category isn't exceedingly egregious. Still, even New Zealand is clearly not impervious to the double-standards the Oscars have for English-language and foreign-language titles.