The Virgin Suicides is a captivating and wistful experience 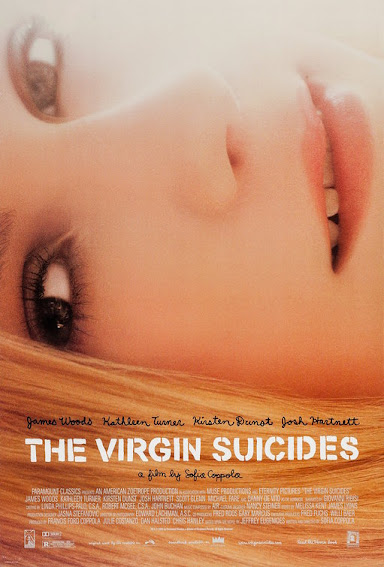 It's always a fascinating experience to go back to a filmmaker's roots after having seen their later movies. It's like looking at childhood pictures of someone you got to know as an adult. In the case of director Sofia Coppola, she got her start as a filmmaker with The Virgin Suicides. Before Lost in Translation and The Bling Ring, Coppola established her name as an auteur of note with this melancholy look at teenage existence. In some respects, it's very much part and parcel with her later works, but in other respects, The Virgin Suicides carries its own unique disposition that reflects the creative elasticity of Sofia Coppola.

A foreboding air pierces the screen as The Virgin Suicides begins. Giovanni Ribisi's narration told from the perspective of a local boy all grown up, informs the viewer that the daughters in the Lisbon family, Therese, Mary, Bonnie, Lux, and Cecilia, eventually committed suicide. Some movies hinge their drama on whether or not a character will survive. The Virgin Suicides decidedly answers that question right away. The tension here thrives on the uncertainty over the circumstances that led to these girls taking their own lives. Cecilia is the first to go and her passing leads to the Lisbon parents, Ronald (James Woods) and Mrs. Lisbon (Kathleen Turner), exact extreme control over their children.

In their determination to never lose another daughter, these two adults only exacerbate the circumstances that have led to the sorrow of these five girls. Therese, Mary, Bonnie, Lux, and Cecilia, they all just want to live, to be people who are allowed to have complicated lives. But they're not seen as people. Not by their parents, nor by classmates who whisper about them nor by newscasters just looking for a big story and especially not by boys like Trip Fontaine (Josh Hartnett). The Virgin Suicides holds up a mirror to a familiar world where even adolescent girls are crushed by society's expectations of what women should be.

It's impossible to navigate all that, let alone the overwhelming emotions that naturally stem from living in this realm day-in-day-out. Coppola's screenplay, adapted from a book by the same name by Jeffrey Eugenides, finds such emotionally involving ways of reflecting these experiences. The tree in the girls' front yard, for instance, becomes a tragic manifestation of both Cecilia and the frequent futility of standing up against authority. Meanwhile, an especially insightful detail about The Virgins Suicides' depiction of systemic dehumanization of women is in Mrs. Lisbon. She herself is responsible for smothering and restricting her daughters, for putting up standards of how women "should be".

Sometimes, I absolutely hated Mrs. Lisbon, like in a scene where forces Lux to burn her records. But then I realized that she doesn't get a name. She's become so oppressed by the world that she's trying to protect that she's no longer a person with a distinct name. She's a housewife, a prize for her husband, but she's not her own standalone being. It adds a tragic undercurrent to a figure who could have been simply a one-dimensional antagonist. The same level of thought that's gone into the character of Mrs. Lisbon also informs the ethereal filmmaking of The Virgin Suicides, as Coppola's direction renders the world of these five girls like a dream that always stays just out of reach.

It's an atmosphere that proves nothing short of captivating, especially when paired up with the most affecting melancholy moments of the production.. Here, The Virgin Suicides goes from emulating a dream to evoking wistful memories, as if we're replaying visions of the past that we wish we could change. You feel as though you've walked the sidewalk of the Lisbon's neighborhood or passed by this family's house. It's a subtly transportive style of filmmaking that shows such skill on the part of Coppola. You'd never guess this was her directorial debut from her control behind the camera. Coppola's made many films after The Virgin Suicides, many of them great, but her directorial debut may still be her most excellently-realized creation.