The Hunted Has Two Exceptional Leads But A Boilerplate Story 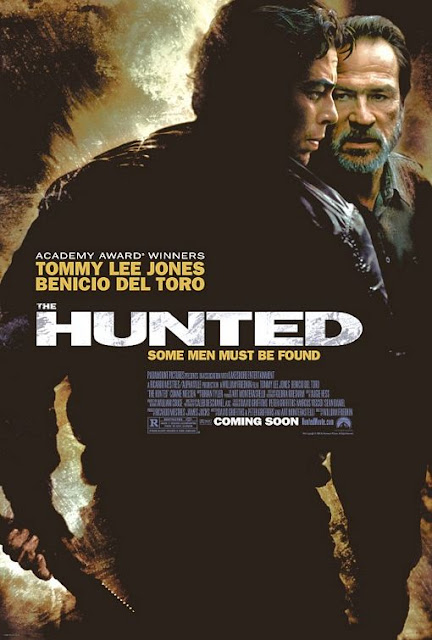 For those two people out there who have been dying for an action movie that pits Tommy Lee Jones against Benicio Del Toro, well, the March 2003 feature The Hunted has got you covered. In this William Friedkin directorial effort, Del Toro plays a decorated U.S. soldier named Aaron Hallam who has had extensive experience taking down enemy forces with excessive gruesomeness. Now he's gone rogue from his handlers and committed a series of grisly kills on American citizens. Such slaughterings have caused local law enforcement to call in the aid of the normally reclusive L.T. Bonham (Tommy Lee Jones).


Bonham thought this would just be a normal mission, but once he's actually discovered that it's Hallam behind these slayings, he begins to get worried. You see...Hallam taught Bonham everything he knows! Yes, the trait of a hero/villain dynamic also being a former mentor/apprentice dynamic that we've seen in so many movies, including Agent Cody Banks 2: Destination London, rears its head once again in the script for The Hunted. It's a screenplay that tends to get bogged down in derivative details, though there are some thoughtful flourishes to the writing, particularly during the first act when the individual personalities of the individual lead characters are being established.

Specifically, the writing effectively contrasts how Hallam is a killer consumed by the horrors of his actions while Bonham is a person whose go-to instinct is to care for wounds. Bonham's own personality is nicely captured in a scene of him tending to a wounded wolf while a scene of Hallam waking up from a nightmare surrounded by a black void eerily captures his detached nature. Meanwhile, William Friedkin's visual choices also makes the distinct personalities of each character all the more discernable. Specifically, Friedkin's decision to coat Hallam and Bonham's individual scenes in contrasting color palette of shadow-heavy darkness and bright white snow, respectively, makes it clear what vastly different psyches these two people inhabit.

Unfortunately, other visual choices done under Friedkin's watch are less successfully executed. For instance, a decision to film the action scenes in a stripped-down way that removes their glamour is a smart move considering how badly Hallam's mind has been warped by the terrors of war. However, the camerawork and editing used for these hand-to-hand duels between Del Toro and Lee Jones leaves much to be desired. It's all so grim, but the fight scenes just don't earn their tone. Instead of coming off as appropriately nasty, the hand-to-hand combat is done with such unearned sobriety that it teeters into unintentional comedy.

This is especially true during exceptionally poorly-executed moments in these fights, most memorably the sudden introduction of a tranquilizer dart that takes out Hallam. Meanwhile, brief deviations into a more traditional cornball action movie, like a montage sequence showing Hallam and Bonham individually preparing their own handmade weapons for their final confrontation, are fun to watch but they don't fit in the overall movie. Ditto for an extended chase scene that sees Bonham chasing down Hallam across every mode of transportation possible for so long that you expect one of the characters to turn to the audience and ask why they're engaged in a chase scene in the first place!

Tommy Lee Jones and Benicio del Toro don't make for an exciting pair to watch engage in action scenes but they are, at least, well-cast for the individual personalities of their respective roles. This is especially true of Benicio del Toro, he's always tended to excel when portraying people worn ragged by the horrors of their past (see: Sicario), so he's able to capture the weary internal torment of his character in The Hunted without breaking a sweat. Benicio del Toro and some thoughtful visual touches are the most exceptional parts of The Hunted, which is otherwise an inoffensive but thoroughly disposable action title. Director William Friedkin and company were clearly aiming for something more thoughtful here but the end result is just a movie tailor-made to rerun endlessly on TNT on Tuesday afternoons.
Posted by Douglas Laman (NerdInTheBasement) at 1:49 PM