Diane Is A Quietly Harrowing Exploration of Guilt 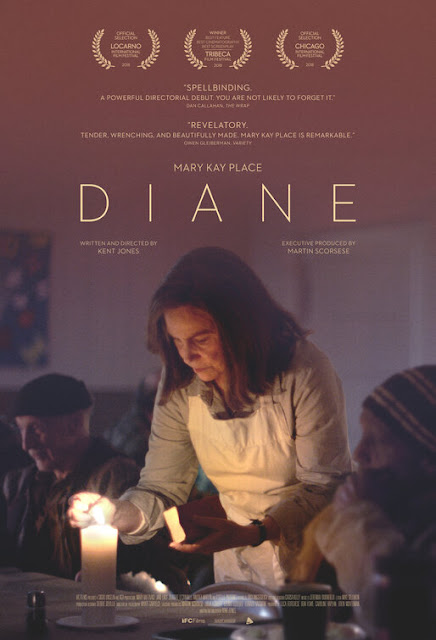 After we do something wrong, we say we're sorry, we promise to do better and then life goes on. That's how it's supposed to work, atonement from the sinner and forgiveness from those around the sinner. But it's never really that simple in life. No matter how much we apologize, no matter how much we try and rectify our behavior, the past still lingers in other people's minds and our own. Past sins tend to feel like some kind of endless tunnel we can never emerge from. Is there any way out? Even if there is, do we even deserve to find a way out? Such are the weighty questions plaguing the titular protagonist of Diane, an indie feature film from writer/director Kent Jones released last Spring.


As the movie begins, it's made abundantly clear that Diane (Mary Kay Place) is a person who cares for others. She's working at a local soup kitchen, she does everything in her power to take care of her sickly hospitalized cousin and she goes above and beyond looking after her addiction-afflicted son Brian (Jake Lacy). Her life, as well as all of her energy, is shared with so many other people. As the film progresses, we begin to learn just what motivates Diane to expend so much of herself on others. Turns out, she's wracked with guilt over events from two decades ago concerning her running off with a lover and abandoning Brian with Diane's now bedridden cousin.

For Diane, Kent Jones (who also directs) pens a script is an intimate low-key creation that keeps itself close to the ground and that means it renders Diane's plight in an appropriately subdued fashion. A major downbeat scene involving Diane partaking in drinking in a tavern, for instance, doesn't see Diane going on a bender across town, she simply sips on cups of booze in a table by herself in the back of the bar. Such muted actions are all we need to fully understand the magnitude of what Diane is doing. It isn't the act of drinking that sticks with you but how isolated she is. She's spent every scene of the movie up to this point interacting with other people, so to see her so detached from the rest of the world is chilling.

That level of insight flows throughout Jones' handling of these characters, with the supporting figure of Brian especially getting to go to interesting places as he grapples with his addiction and becomes a Born Again Christian. Other movies would have struggled to pack so much character development organically into a ninety-five-minute-long but since Jones takes his time in letting us exploring each individual piece of growth Brian goes through, his arc throughout the movie doesn't feel at all hurried. It just feels like we're watching organic pieces of growth from a guy trying to find ways to cope with the demons inside.

Like mother, like son, I suppose, because Diane is also having similar struggles to her son and is also brought to life with similarly sharp writing. The anchor of the entire movie, Diane's lead character is rendered with fascinating levels of complexity and world-weariness, two qualities exceptionally exemplified by Mary Kay Place's lead performance. Jones' script and Place's acting work as a great team in Diane, the screenplay drums up plenty of rich material that Place can not only execute properly as a performer, she can bring her own extra layers of depth to the table as well. From the moment she steps out on-screen, Place makes it clear that there's so much more going on inside Diane than just being a dutiful mother and cousin.

It's impressive how much subtle fatigue Mary Kay Place is able to capture in just the way Diane composes her body language while her muted depiction of Diane's guilt over her past is realized in an achingly-visceral fashion. I especially love how Place captures Diane being so confused over how to process this guilty, that's such a realistically messy depiction of how people cope with the mistakes of their past. Diane as a whole movie is well-made (Jones' direction, for instance, does strong work in visually reflecting Diane's interior struggles) and worth seeing, but its best quality is certainly Mary Kay Place in the titular lead role. Her work here is immensely subtle yet will doubtlessly linger with you just like guilt weighs on our conscience.
Posted by Douglas Laman (NerdInTheBasement) at 9:58 AM