Only the Brave Focuses On Characters Much To Its Benefit 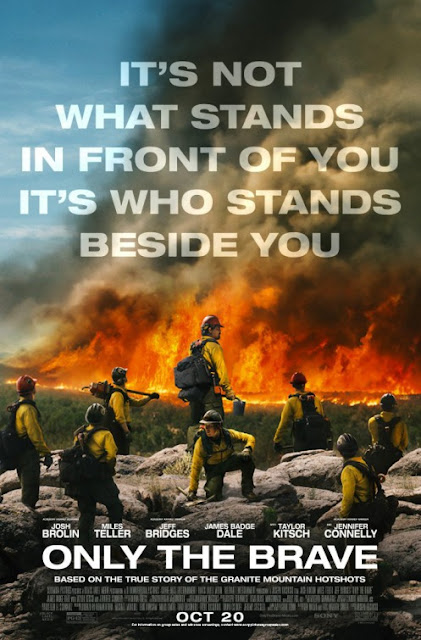 Only the Brave came and went in a shockingly quick fashion in its October 2017 theatrical release. True, its lead subjects weren't as much of household names as, say, Chris Kyle, so the project was never going to hit Avengers: Endgame box office numbers. Still, a film like Only the Brave that seemed to push all the right buttons for older audiences in its marketing wiping out like it did (it made only $18.3 million domestically, just behind the domestic totals of CHiPS and The Circle among 2017 new releases) was shocking. Hopefully it can one day pick up a second life as a cult classic because Only the Brave is a shockingly good movie, one that's more just forest fires and bro-tastic dialogue.

Eric Marsh (Josh Brolin) loves being a volunteer firefighter tasked with helping to put out forest fires around his hometown of Prescott, Arizona, but he doesn't love that he and his team aren't certified as wildfire hotshots. No group of local firefighters has ever received such status before but Marsh and his boys aren't just routine firefighters. They're committed to doing their dangerous job no matter the cost and that passion is shared by their newest member, Brendan McDonough (Miles Teller). Previously a slacker held down by the sickness of addiction, the birth of his daughter has gotten Brendan to clean up his act and pursue a career as a firefighter under the watch of Eric Marsh.

From this starting point, Only the Brave follows the simultaneous subplots of Brendan getting himself integrated into Marsh's firefighting team as well as Marsh's own personal struggles, chief among them being his relationship with his wife Amanda Marsh (Jennifer Connelly), in the face of his uphill battle to get his firefighter crew the certification they deserve. What's particularly impressive about Ken Nolan and Eric Warren Singer's screenplay for Only the Brave is how much focus it gives to smaller character interactions and character beats that other films would have regretfully left on the cutting floor.

The individual members of Marsh's firefighter crew are given little consistent personality traits throughout that ensure they each come across as human beings rather than just carbon copies of one another. One of them is in a garage band, one of them is the jokey hothead played by Taylor Kitsch, another makes sure to collect rocks for their child. Only the Brave is rightfully impressed with the heroic courage these men muster up to face forest fires but it doesn't take the easy route of turning them into one-dimensional foible-free superheroes. As A Beautiful Day in the Neighborhood astutely pointed out, thinking of people we admiring as saints just puts such people above us, they become a level of humanity that we could not possibly hope to achieve.

That scene makes a point that we should think of aspirational figures as human beings doing their best and that's the route Only the Brave takes with its careful character-heavy approach to this true story. Nolan and Singer's script adhering to this focus turns out to be a great move, save for some grating dialogue that attempts to demonstrate a humorous rapport between the firefighters. Interestingly, director Joseph Kosinski turns out to be a good fit for this material despite his previous feature film directorial experience not exactly suggesting he'd be the ideal match for this material. Up to this point, Kosinski's been exclusively a director in the realm of big-budget blockbusters like Tron: Legacy and Oblivion.

Kosinski has shown an undeniable gift for distinctive tentpole visuals in the confines of tentpole cinema and that steady visual hand of his is both certainly on display here and helps to show how well he can handle the character-centric nature of Only the Brave. For instance, Kosinski constantly employs wide shots for unexpected sequences that help to reinforce the mood of certain sequences. A critical argument between Eric and Amanda is an especially good example of this, the camera being so far away from the duo emphasizes how much distance is also between them. Previously, Kosinski employed wide shots to let viewers soak in CGI spectacle. Now he's using them to let viewers soak in character details.

Kosinski also works well with getting strong performances out of his ensemble cast, particularly a well-cast Josh Brolin as Eric Marsh. Brolin tends to be the epitome of classical Southern masculinity in his on-screen personas but he's also a darn fine actor, rarely does he lapse into broad stereotype when embodying that archetype. Thus, he lends believable intimidation but also convincing humanity to the role of Eric Marsh while Miles Teller delivers one of his finer recent lead performances depicting the various up's and downs Brendan McDonough endures throughout Only the Brave. Without getting into spoiler territory, Teller especially nails his characters' devastating emotional beats during the film's climax. This part of his performance, as well as the last few scenes as a whole, end Only the Brave on a poignant note that'll make even the most hardened viewer drop more than a few tears.
Posted by Douglas Laman (NerdInTheBasement) at 11:22 AM