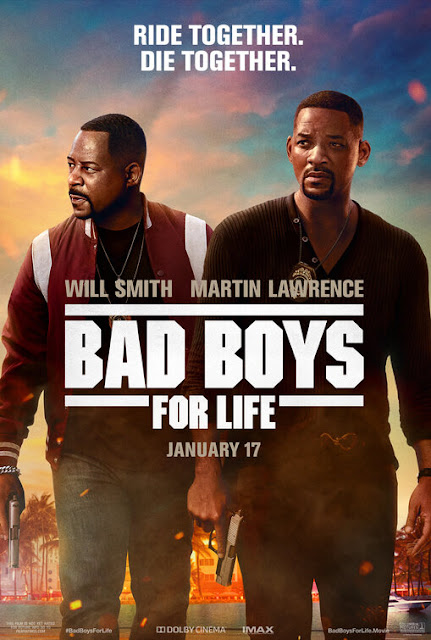 Seventeen years after Bad Boys II, those boys are back in town (how was that not the official tagline on the post?) for Bad Boys For Life. Director Michael Bay has left the building but directors Bilall Fallah & Adil El Arbi have now taken over while franchise stars Will Smith & Martin Lawrence are still around to hold down the fort. Doing another one of these films all these years later can't help but set off warning bells in one's mind that Bad Boys For Life will be end up being nothing more than just a cash grab. Thankfully, while the resulting film is nothing super lasting or groundbreaking, it does at least deliver on your appetite for explosions and snappy banter.


Middle-age is catching up with Miami detectives Mike Lowery (Will Smith) and Marcus Burnett (Martin Lawrence). They've been partners in their pursuit of bad guys for well over a quarter-of-a-century, but while Lowery wants to engage in high-speed car chases until he dies, Burnett just had a kid and would rather settle down for a more quiet life. Their mortality is reinforced when Lowery is attacked by a mysterious gunman who has a personal vendetta to enact against Lowery. Now Lowery is determined to bring the killer to justice while Burnett is more convinced than ever that a low-key home life is what he needs. Cue increased tension between Lowery and Burnett who are going to have to take a cue from Tim McGraw in terms of learning how to be real bad boys who might just make good men.

The Bad Boys For Life screenplay, credited to Chris Bremner, Peter Craig and Joe Carnahan, has its fair share of elements that are derivative. A number of gags, for instance, land as predictable rather than humorous while the eventual villains could have used a greater dash of originality. That having been said, it's not without its grace notes of cleverness. For one thing, the notion that the two lead characters are no longer young men is mined for some fine jokes and even moments of effective poignancy. Straight-faced macho invincibility of their younger years has given way to Mike Lowery dying his beard to keep the grey hairs out of sight.

Another surprisingly well-handled detail is the presence of AMMO, a group consisting of younger law enforcement officers who are more used to using gadgets and gizmos to take down criminals rather than brute strength. They aren't an essential part of the plot and it'd be nice if the member of  the group that was played by Vanessa Hudgens got more of a distinctive personality, but it's nice that the dynamic between this gaggle of crime-fighters and the two veteran lead characters doesn't just go down the predictable "old people vs. young people" route. There's a more supportive rapport between the different groups that's oddly wholesome, a word one wouldn't normally associate with the Bad Boys franchise. Also nice that the AMMO group contains a member whose basically one of those guys in those memes featuring muscular men being thoughtful on laptops.

Meanwhile, Fallah and Arbi's direction strikes a nice balance between hewing closely to certain visual tenants associated with the visual style of previous Bad Boys director Michael Bay (chiefly, transitions between shots consisting of the camera whipping across the screen) while setting up their own visual hallmarks. Most notably, Fallah and Arbi make appealing use of a variety of brighter colors in contrast to the heavy emphasis on yellow/orange in Bay's prior works. Even just a scene of the two main characters watching the sunrise is used as a chance for Fallah and Arbi to paint the sky in some mighty pretty looking shades of purple. Many interior environments typically make use of similarly vibrant interior neon lighting, save for a shoot-out in a mechanic's garage which finds its own explosively clever way of incorporating bright colors into its own locale.

This directorial duo also works well with executing the assorted action sequences, most of which aren't as instantly memorable as, say, the assorted fight scenes in a John Wick movie but do get the job done in visually coherent (no shaky-cam and very little disorienting editing to be found here) and not losing track of who's shooting at who and why. Best of these action sequences is an extended motorcycle chase that makes delightful use of a machine gun turret and some snappy banter between Will Smith and Martin Lawrence. These two really do have sharp especially sharp chemistry together while Will Smith still has movie star charm to spare. Bad Boys For Life really doesn't rewrite the book but it does deliver cool explosions, some gnarly deaths and Joe Pantoliano being a hoot. I call that a solid win among your typical January fare.
Posted by Douglas Laman (NerdInTheBasement) at 9:38 AM