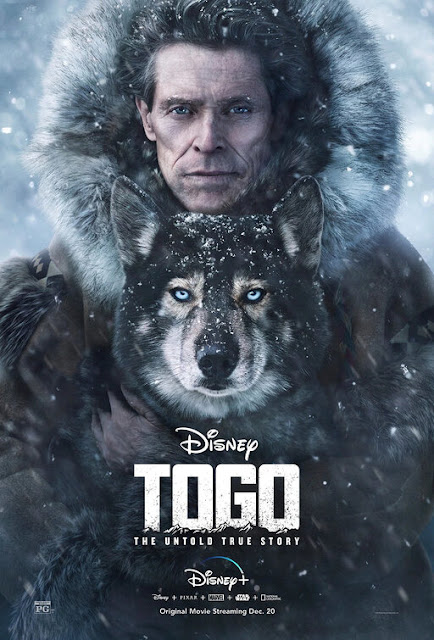 American cinema's current fascination with live-action dog movies continues onward. This time, instead of Sense8 Dog or Kevin Costner Racecar Dog, it's a real-life doggie, Togo, who was instrumental in pulling off that famous 1921 serum run during an Alaskan snowstorm that Balto got all the credit for. The aptly titled Togo can't help but remind one of how many live-action family movies about dogs we've gotten recently but it isn't long before it manages to establish its own identity and notably exceed the level of quality you normally see from these type of movies. In fact, it's probably one of the better features released by Walt Disney Pictures in recent years, though that's not saying something when the studios been focused on titles like The Lion King (2019).

So, who is Togo? He's a Huskey (portrayed here by a dog named Diesel) belonging to sleddog breeder Leonhard Seppala (Willem Dafoe). The primary focus of Togo is on Seppala, Togo and a herd of sled-dogs embarking on a trek across the Alaskan wilderness during a snowstorm to help get medicine for local sickly children. Throughout the runtime, though, we get flashbacks to when Togo was just an energetic puppy and Seppala couldn't wait to get rid of him. At times, such scenes come across like Arctic Marley & Me as Togo constantly acts like the "world's worst dog" in his all of his mischief that drives Seppala mad.

Seppala's wife, Constance (Julianne Nicholson), sees potential in the puppy that eventually becomes clear once Togo gets a chance to lead Seppala's sleddog team. From here, man and dog form a deep bond that makes the central snowtime rescue mission all the more crucial. It's awesome that the flashback scenes give us the chance to see so many Husky puppies but unlike, say, Greta Gerwig's Little Women, a nonlinear narrative isn't something that exceedingly enhances the overall quality of Togo. There isn't much in the way of new information to be gleaned from these flashbacks and they contain the most humdrum material you'd expect to find in a family movie of this ilk.

That having been said, at their worst, these flashback scenes are inoffensive timewasters that, like the entire production, get immensely improved by the presence of Willem Dafoe. Considering usual live-action Disney family movies get headlined by the likes of Tim Allen or other ABC sitcom stars, it's stunning to see Dafoe, hot off The Florida Project and The Lighthouse, showing up here headlining such a title. If you think that Dafoe is gonna sleepwalk through things not that he's traded A24 for Disney, you don't know Dafoe. In addition to being something of a scientist himself, Dafoe does not phone in his performance. If he couldn't do that in Motherless Brooklyn or Death Note, he isn't doing it in Togo.

Thus, the protagonist of Togo has a sense of unexpected but welcome conviction, you totally buy Seppala's friendship with the titular pooch as well as the characters growing sorrow over Togo's increasing vulnerability as he gets older (the dog is twelve years old once they set off on their snowy trek). Dafoe even gets to bellow out an extended monologue riddled with old-timey words in the face of a storm that reminds one of a similar moment in The Lighthouse! Dafoe's work on-screen isn't looking to dumb itself down for youngsters, it simply delivers something good that's totally appropriate for kids to watch. This quality extends to numerous other aspects of Togo, including in Tom Flynn's script.

Though his screenplay contains requisite spectacle and peril like a pair of iced-over lake action set pieces, Flynn's writing for Togo doesn't shy away from centering on smaller intimate character scenes other family movies would cut out of fear of "boring" children. Trusting the attention span of children to endure through important character-building scenes serves Togo well since it provides ample dramatic grounding for the more intense portions of its story. Such a script is executed nicely under the direction of filmmaker Ericson Core, no stranger to live-action Disney fare after directing the 2006 football drama Invincible.

His work as both a director and cinematographer on Togo occasionally visually evokes not that Disney feature but his last directorial effort, the 2015 take on Point Break (thankfully, Togo doesn't take after the Point Break remake in overall quality) Most notably, Ericson Core carries over the lenses and heavy presence of gold color grading found in that stunt-heavy production. As for the visual elements he brings to Togo, though, Core has a strong visual eye that keeps action sequences visually coherent (impressive considering so much of this takes place in a monstrous blizzard) and creates a number of memorable images through the use of wide-angle shots. I was left puzzled, though, by a constant presence of fuzziness around the frame that's usually used in movies to indicate you're watching either a dream or a flashback. That's a peculiar decision, but it doesn't heavily hinder the otherwise solid family movie Togo. Please, Walt Disney Pictures, make more movies like this and less like whatever was going on with last year's Dumbo remake.
Posted by Douglas Laman (NerdInTheBasement) at 6:55 PM