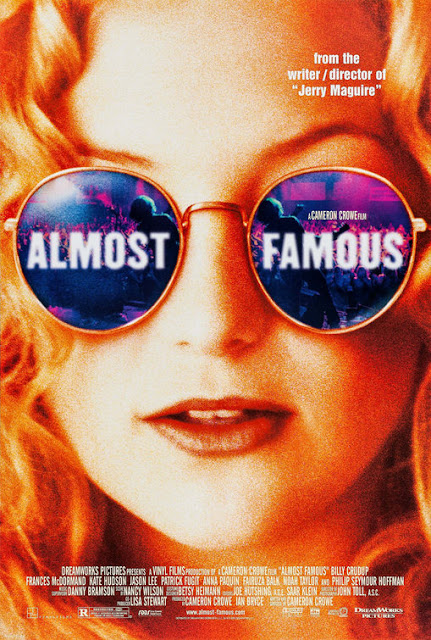 In the 2010s, writer/director Cameron Crowe didn't have the best of luck when it came to his creative pursuits. We Bought a Zoo was a box office underperformer that spawned a wonderful Twitter account but little in the way of the acclaim that greeted Crowe's earliest films while Aloha....everything went wrong with Aloha. The trailer for Aloha looked like it belonged to a parody film, the actual movie was borderline incoherent and its racially insensitive casting is maybe the film's only legacy. Then there was the Showtime drama Roadies, which lasted a season and hasn't been mentioned since its final episode ended until this very moment.


But before all of that, Crowe was responsible for Almost Famous, a feature that came directly from his heart. Based in part on experiences from Crowe's own life (including being an underage reporter for Rolling Stone magazine), it's a film that follows fifteen-year-old William Miller (Patrick Fugit), who develops a love for rock n' roll much to the chagrin of his super strict mother, Elaine Miller (Frances McDormand). She'd rather he just focus on pursuing a career as a lawyer rather than doing an assignment for Rolling Stone where he'll follow the band Stillwater on a couple of stops on their tour.

While engaging in this assignment, the sheltered William Miller is opened to a whole new world of rock n' roll as well as a relationship with Stillwater devotee Penny Lane (an actual real-life person here portrayed by Kate Hudson). Miller's a fresh-faced youngster when it comes to the entire world of adulthood, let alone the specific niche of being a rocker on a cross-country tour. Cameron Crowe's screenplay places the viewer directly into the perspective of Miller and it's the perfect place to tell this story. We immediately become immersed in his struggle to just get through the door (literally) to interview some rockers early on in the story and from there Crowe keeps viewers emotionally captivated by Miller's exploration of a world he's only previously listened to on vinyl records.

Better yet, Crowe's script doesn't just make the world of rock n' roll a fanciful land of Oz, it's one that eventually reveals itself to be rife with real-world complications. This is especially true of the most famous member of Stillwater, Russell Hammond (Billy Crudup). Crowe's screenwriting is superb at exploring Miller gradually discovering the addiction-riddled human being behind the smiling pretty fellow you see on an album cover. Rock & roll is thought of as an art form perfect for escapism but it becomes clear to Miller that folks like Hammond or Penny Lane cannot escape their own demons even when living a life that's just wall-to-wall rock & roll.

Fully embracing nuance when it comes to the people Miller meets out on the road makes the likes of Penny Lane come across as actual human beings, which just makes it all the more emotionally engaging to watch Miller develop a familial bond with these people. These shades of grey are even applied to Miller's Mom, a character who could have been a nagging stereotype in lesser hands. Though there's some enjoyable comedy to be mined from her parenting style ("Don't do drugs!" she yells to her son before he heads off to a rock concert), she's still treated as a recognizably human person on a writing level rather than just as a source of mockery.

That sense of humanity is only enhanced by a thoughtful performance by Frances McDormand, she especially nails the precise way her character delivers crucial pieces of dialogue. A scene where Hammond listens to Elaine Miller read him the riot act over the phone is made all the more delightful because of how much convincing authority McDormand lends her line deliveries. McDormand's the strongest part of what's an especially noteworthy cast, one rife with performers delivering unexpectedly dramatic turns. The best example of that quality is Jason Lee, I had no clue Jason Lee was in this before watching it and I never would have guessed he'd end up in a prestige drama from the turn of the century.

Having said that, he's totally believable and effective as Stillwater's frustrated lead singer, I'd be curious to see him in other works like Almost Famous. Kate Hudson also shines as Penny Lane, particularly in how well she's able to immediately make such a believably confident personality and then organically pull back the curtain to reveal a more complex tortured person underneath. The cast in Almost Famous is as consistently excellent as the well-picked soundtrack of vintage rock tunes. Tiny Dancer has been used in plenty of movies, but this may be the all-time best use of it! That outstandingly moving Tiny Dancer scene alone shows that, while it's fun to joke about modern Cameron Crowe movies like We Bought a Zoo and Aloha, we gotta give respect where respect is due. Cameron Crowe knocked it out of the ballpark when it comes to Almost Famous.
Posted by Douglas Laman (NerdInTheBasement) at 5:26 PM