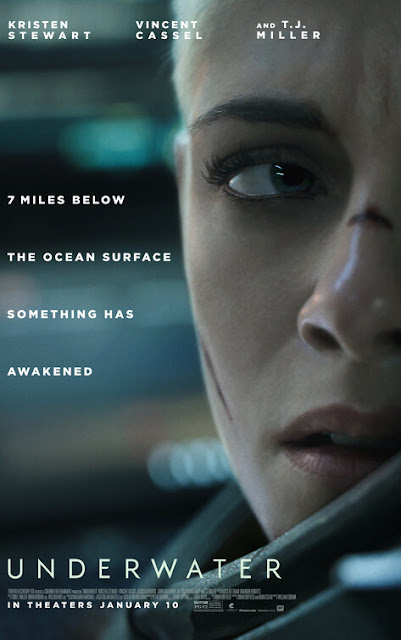 Movies have taught us all many things but they've been especially proactive in imparting wise advice regarding how dangerous underwater beasties can be. Free Willy and Flipper, they're the exceptions, not the rule. Large bodies of water are where Jaws, the Kracken, the Creature from the Black Lagoon and all manner of deadly creatures roam. Add the new Kristen Stewart vehicle Underwater to the long list of cinematic warnings about what lies beneath the water. Unfortunately, it's far from the best moisture-heavy monster tale, though it isn't without its charms. Plus, it's certainly a good deal better than your typical January horror fodder like last week's miserable feature The Grudge.

Underwater begins in media res, a bold choice that sees viewers and protagonist Norah Price (Kristen Stewart) being plunged headfirst into a catastrophe. Norah and 360+ other people work on a drilling station located deep into the ocean floor. Isolated from the surface, they're now all now in grave danger as the base collapses around them. Only Norah and five other crew members, including research assistant Emily Haversham (Jessica Henwick) and Captain Lucien (Vincent Cassel), have survived and they find few options for getting out of what remains of this station. It appears their only recourse now will be to put on some fancy diving suits and walk across the ocean floor to another nearby base.

Through most of its first-half, Underwater resembles Deepwater Horizon more than the creature feature horror tale that the marketing has been selling. You don't need some kind of monster when collapsing underwater buildings provide plenty of tension on their own. The intense interior scenes of Norah and company trying to make it from one crumbled room to the next are especially well-realized in terms of creating suspenseful intensity. This can be chalked up in part to how well director William Eubank conveys claustrophobia on a visual level as well as the use of handmade sets that lend a tangible quality to the shattered environments the characters encounter.

Once the characters get out onto the ocean floor, this is where the monster element begins to creep into the proceedings. There's a quietly eerie nature to the way writers Brian Duffield and Adam Cozad gradually make the presence of an underwater monster apparent. At first, you see it lingering in the background or swimming just out of frame. It puts your guard up and questioning what you're seeing. But this more restrained approach to the monster can't stick around forever. Eventually, Underwater embraces having its aquatic creature show up prominently on-screen, which, unfortunately, is where the movie's problems become more pronounced.

The moment Underwater embraces its inner monster slasher movie, that's when it gets way less interesting. This is mostly because the scares, revolving around this monster hunting down the human characters, aren't that distinctive. Despite having such a unique backdrop like the bottom of the ocean at your disposal, not to mention a brand-new aquatic monster, Underwater just settles for a bunch of generic jump scares. Only one creepy scene where Norah and Emily have to navigate a pack of sleeping sea monsters see's Underwater taking advantage of the unique horror-based tools at its disposal. Another issue is that, visually, the scenes set in the murky depths of the ocean frequently become difficult to make out. When the going gets really tough, it's all too easy to lose track of which characters are where. Thematically, little of the monster mayhem ties into any of the lead characters on a specific personal level.

Norah Price, particularly, spends the middle portion of Underwater just reacting to CGI events happening around her. It's remarkable how detached she is from so much of the central story, this could be any character reacting in horror to an underwater beastie. Underwater's final twenty minutes do try to rectify this issue by clumsily and hurriedly giving her a tragic backstory to tie into the plot, but by then it's too late. That having been said, Kristen Stewart at least gives the role her all and there is some real fun to seeing the star of Personal Shopper headlining a goofy monster movie. Stewart really deserved a more consistently successful and specifically detailed movie than Underwater. Much of this production is competent but it so rarely is able to stake out its own identity. Underwater too often just settles for the most basic kind of scares and characters despite having an interesting central premise and a great lead actor at its disposal. Underwater's tendency to settle for the ordinary just doesn't cut the mustard, especially when considering all the endless options out there for aquatic horror tales.
Posted by Douglas Laman (NerdInTheBasement) at 3:47 PM