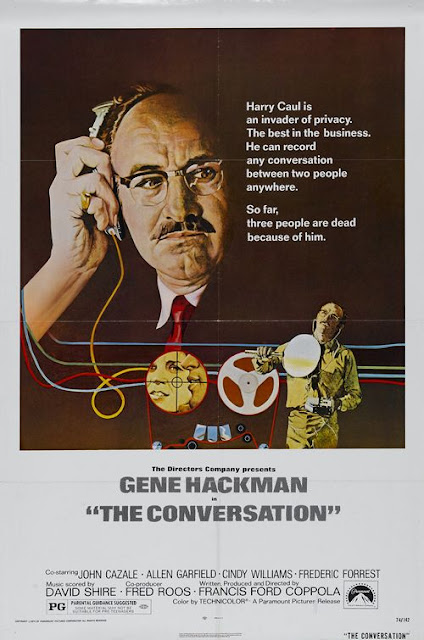 Francis Ford Coppola's best movie, The Godfather: Part II, dropped in December 1974, in the process becoming one of the greatest films of all-time and a Best Picture winner at the Academy Awards. Also competing for that same award in the same year was another Francis Ford Coppola directorial effort entitled The Conversation. What a flex, not just dropping two movies in a year, but making both of them acclaimed motion pictures that traveled the 1970s zeitgeist while also scoring Best Picture nods. In this house called Land of the Nerds, we stan a legend, and such a feat alone renders Francis Ford Coppola as one.


Of course, just directing The Conversation would be enough to justify heavy levels of praise for Coppola. One of a number of political thrillers released in the 1970s that played on the American public's distrust of authority in the wake of the Vietnam War and the Watergate scandal, The Conversation follows Harry Caul (Gene Hackman). He's an expert at surveillance, if you need somebody to pick up a far-away conversation in as discreet of a fashion as possible, Harry Caul is your man. He's been in this field for eons now and he's managed to perfect his craft, though he's still paranoid about the prospect of being spied on himself.

His newest assignment involves following two young lovers who are walking in circles around a park and handing over recordings of their conversation to a potentially dangerous figure of authority. It starts out as just another assignment but Caul eventually becomes obsessed with what kind of larger squabble he's gotten ensnared in. A guy who usually prefers to be withdrawn is about to become embroiled in something far larger than himself. The personality of The Conversation's lead character proves to be fascinating in a number of respects, but it's especially interesting given what a departure it is from traditional roles that Gene Hackman plays.

From the time he first stepped onto people's radar with his turn as the boisterous older brother of Clyde in Bonnie & Clyde, Hackman has been known for playing confident people with pronounced personalities. They can range from thoughtful mentors to aggravated cops,  but Hackman is not an actor known for playing meek fellows like Harry Caul. Though it's a departure from the roles typically associated with Hackman, it turns out he can excel in this kind of performance. Instead of leaning into a cartoonish stereotype, Hackman lends real authenticity to his depiction of a socially awkward guy fearful that every room could be bugged with a secret microphone.

A scene where Hackman's Caul tries to muster up the courage to engage in an extended conversation with a lady that's partying at his lab radiates with genuinely-realized awkward, you simultaneously squirm in your seat and have your heart go out to this withdrawn guy as he tries to surmount the challenge of connecting with others. Hackman's remarkably well-defined lead work in The Conversation may be my personal favorite performance of his and one of its many great qualities is how Caul's believable sense of paranoia helps to cement the idea that there truly is nobody to trust or turn to in this universe. Hackman's work in front of the camera makes it clear this isn't all in Caul's head, this man truly inhabits a world devoid of security.

Aiding the suspenseful atmosphere of the piece is top-notch editing courtesy of Walter Murch & Richard Chew. The Conversation frequently cuts back-and-forth between larger events (like the young couples park conversation or an obscured hotel room skirmish) and Caul's intentionally detached response to said events. In the wrong hands, going between these two perspectives could have been clumsy and made The Conversation feel like two movies smushed into one. In the hands of Murch and Chew, though, these disparate perspectives intertwine beautifully. Especially well-done in this regard are a series of masterfully-timed cuts between the park conversation and a frustrated Caul in his lab trying to decode what the two people are saying.

Like Murch and Chew's editing, the cinematography from Bill Butler also helps to accentuate the unnerving aesthetic of The Conversation. The constant use of wide shots that emphasize how alone Caul is in any environment are particularly well-realized, even Caul's apartment feels like a vast void he cannot navigate in the skilled hands of Butler. Every part of The Conversation is clearly trying to evoke the specific sense of paranoia and unease gripping America in the mid-1970s, but a movie all about omnipresent surveillance like this one has only grown more and more relevant in the modern era. Like great filmmaking, the chilling realization that you're being watched by figures far more powerful than yourself is truly timeless.
Posted by Douglas Laman (NerdInTheBasement) at 3:10 PM