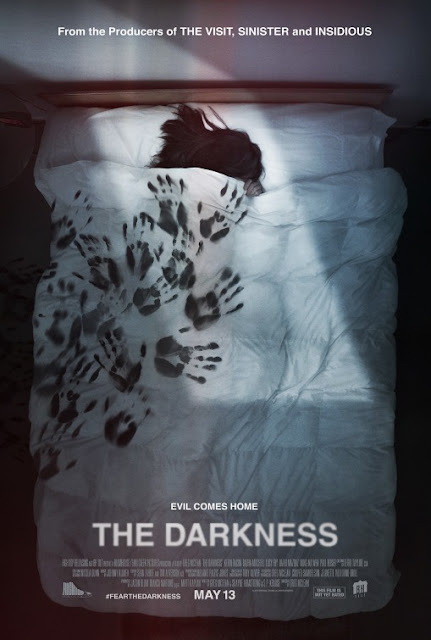 For every modern day horror movie like The VVitch, You're Next and It Follows that dares to upend conventions of the genre, you're bound to find hundreds of other horror movies like The Darkness that seemed to have fallen right off an assembly-line. Seemingly crafted for the sole purpose of being found on Netflix by horror movie junkies at 1 AM, these are the kind of films that drudge up cliche after cliche without even daring to dress up said tropes in a fancy get-up or even a modicum of craft. Honestly, The Darkness strikes me as so paint-by-numbers that I'm seriously shocked Blumhouse Productions went through all the trouble of giving it a theatrical release.

The Taylors may seem like a typical family on the outside. but lemme tell ya, that all changes when youngest son Michael (David Mazouz) gets possessed by some ancient spirits at a trip to the Grand Canyon after removing some hidden magical stones.  Before you can say "Hey, isn't this an all-too-familiar set-up?", strange happenings begin to occur in the house. Namely, Michael develops a penchant for an imaginary friend named Jenny, while the other family members have their own personal issues to go through. Father of the family, Peter (Kevin Bacon) is having feeling for a pretty young co-worker, older sister Stephanie (Lucy Fry) has an eating disorder that appears in one scene and then vanishes while Bronny (Radha Mitchell) tries to cope with their son's new odd tendencies.

Very little of the family drama that I've just described factors into the primary plotline (which revolves around the possession of the son), it just seems like more filler to pad out the movies excruciatingly overlong 93 minute runtime. None of the characters are remotely engaging, with their quandaries being about as rote as they come. And the scary stuff they encounter? Well, it's never really scary and only one or two elements of the "horror" (like the abrupt appearance of a raven on one of the families automobile) can even manage to be unintentionally humorous. The rest of it is just plain boring. Really, the only remotely unique idea presented in the tepid script is that Michael is Autistic and the members of the family treat the first few symptoms of his demon possession as just enhanced quirks stemming from his Autism.

Unfortunately, his Autism doesn't factor into the story much at all aside from two brief dialogue references to it, which is a shame cause there are a wold of tantalizing storytelling possibilities that could stem from a horror movie centered on a character on the Autistic spectrum. Take it from me, a guy whose lived with Asperger's Syndrome his entire life! But that would require a level of inventiveness that The Darkness just can't seem to even come close to rising to in any department. Notably, the score sounds like something Hans Zimmer's 8 year old child cobbled together on Garage Band in half an hour, if that.

Most of the actors just look like they're taking a cue from the audience and are being consumed by boredom, who seems to be busy thinking of asking directors James Gunn and Jon Watts if there's any roles in the Marvel Cinematic Universe he could play instead of having to do dreck like this again. Rob Huebel, Jennifer Morrison, Paul Reiser and Ming-Na Wen show up in brief supporting roles that don't add up to much despite each of them showing talent in other projects. Radha Mithcell probably gives the best (I use the word best very loosely) performance out of the cast, though I found it amusing how, whenever she gets weepy over old family photos, the only images she seems to possess over her clan is from their trip to the Grand Canyon at the very start of the movie. Was this movies budget so small that they couldn't shoot other photos of the family in different generic locations like, I dunno, a park or something??

That's a teensy detail to nitpick at, I know. Don't worry, I'm not turning into CinemaSins on ya, but one's mind tends to focus on even the tiniest flaws in a movie this devoid of quality or anything of interest. Moviegoers looking for scares, go rent/buy The VVitch. Individuals scouring the globe for humorously bad films, just go watch an episode of Mystery Science Theater 3000. And those looking for examples of shockingly cheap spirit animal costumes that somehow got into a theatrically released motion picture.....well, I guess you're in luck, cause The Darkness is just for you!
Posted by Douglas Laman (NerdInTheBasement) at 10:10 AM