Concept Art And Plot Details From Cars 3 Have Finally Been Revealed! 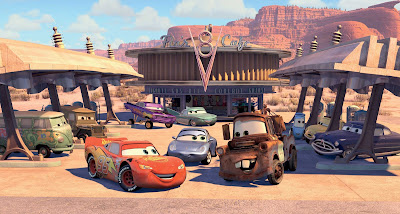 Some concept art and the first plot details have been revealed for PIXAR's Summer 2017 release, Cars 3 via USA Today.

It's pretty apparent that this new Cars adventure is looking to backtrack from the misfire that was Cars 2 in a number of ways. This time the adventure is mainly set in Radiator Springs, Randy Newman is returning to score (Michael Giacchino did a 007-inspired score for Cars 2) and I wouldn't be shocked to see noteworthy characters from the first movie like The King and Chick Hicks return in a notable capacity.

The plot for this new Lightning McQueen adventure will revolve around the hotshot racer having to adjust to a racing world full of younger racecars that seems to be speeding ahead of him. He's gonna get some training from a car named Cruz Ramirez, while a car named Jackson Storm will be the new young racer on the scene. Characters like Mater, Sally and Ramone will be returning for this adventure which will be the directorial debut of Brian Free, who was a storyboard artist on the two past Cars films.
Full disclosure; that original Cars movie is a solid piece of entertainment in my book. It's far more flawed than the average PIXAR production (Lightning McQueen is easily the weakest lead character in any PIXAR movie), but it's still got plenty of charms. Cars 2 is....less so. Let's all cross our tires that Cars 3 is more akin to the first one and less like the second one. There's a good chance we'll be getting a small teaser trailer for Cars 3 on Finding Dory and I'm sure my massive collection of die-cast figures of these Cars character (over 450 vehicles and counting!) will only be expanding further with the release of this new third film.

Here's that new fangled concept art by the by: 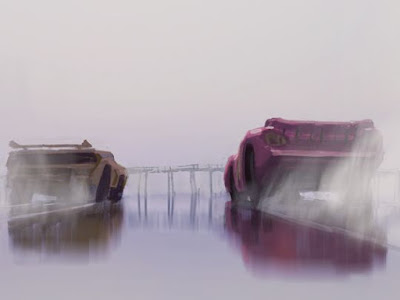 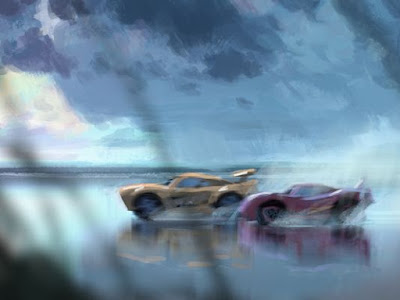 Posted by Douglas Laman (NerdInTheBasement) at 7:53 AM