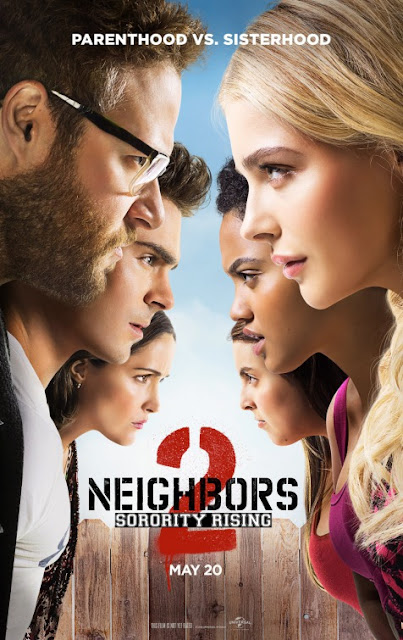 Let it not be said that the (five to be precise) writers of Neighbors 2: Sorority Rising didn't at least flex some creativity when it came time to figure out the motivations of this installments titular neighbors. Whereas the first one had a frathouse led by Teddy (Zac Efron), whose impending exit from college was leaving him with an internal crisis, this one has a sorority, led by Shelby (Chloe Grace Moretz) move in next door to Mac (Seth Rogen) and Kelly (Rose Byrne). For Shelby, her motivation to party like there's no tomorrow is her desire to be more socially outgoing in college compared to her more introverted High School days.

Plus, the desire to fight back against a society that's always telling women how to act or how they should be serves as a fine flame to kickstart the explosion of debauchery. Of course, just like in the first Neighbors, Mac and Kelly don't want their next door neighbors to be so rowdy, so they go through various antics to try to shut the party down. Unfortunately, the results are nowhere near as funny nor narratively concise this time around. Credit where credit is due, the stuff with Shelby and her sorority is probably the most consistently humorous content in the film and the most emotionally resonant, since her character motivations feel like the most organic of the surprisingly large amount of plot threads contained in the feature.

From a story perspective though, Neighbors 2 is otherwise a bust, failing to conjure up a story and instead falling on forced episodic antics that aren't anywhere near funny enough to justify their blatant narrative shortcomings. That's another problem with the script, the jokes that fail just die an agonizing death on-screen. To be fair, the jokes that do land (many of which come from Ike Barinholtz and Rose Byrne, whose gag of thrashing around in her bed in anger had me cackling like crazy), but those jokes that miss the mark are so noticeable in their malfunctions that they drag Neighbors 2 down considerably.

With the jokes just not firing on all cylinders, the foibles in the writing become all the more gratuitous, especially the flaws in related to the characterization of Teddy (Zac Efron). For some reason, he's been relegated to being exceedingly dumb in this film, to the point where he makes Homer Simpson look like Stephen Hawking in terms of intellectualism. It's not an entirely bad route to take the character, per se, and Teddy does get some funny gags related directly to this newfound aspect of his personality (such as his inability to do math problems unrelated to narcotics), but, and I hate to sound like a broken record here, it's not quite funny enough overall to justify the abrupt shift in his character.

A flood of cameos crop up in the film, including individuals like Selena Gomez, Billy Eichner, Abbi Jacobson and Kyle Mooney. Many of these briefly appearing actors deliver some of the films funnier moments, though it must be noted that Hannibal Burress brief reprisal of his role from the first Neighbors gets probably the best joke in the entire movie. In the lead roles, Byrne is still aces while Seth Rogen seems to be the most notable victim of the more scattered nature of this movies lackluster script, with his character getting very little to do from both a plot and humor perspective. I will say Kiersey Clemons proves that her turn in last years charming Dope was no fluke, that she is indeed a talented comedic actor, while newcomer Beanie Feldstein gets to be a noteworthy scene stealer.

Let it be noted that I didn't find Neighbors 2 to be a bad movie, it's just an average film that could have easily been more. There's a lot of good ideas floating around in here, but that's kind of the problem; Neighbors 2 has too much going on and as a result of the crowded aesthetic none of the individual bits and pieces get to live up their fullest potential. While there are certainly laughs to be had, I'd recommend not saying hello to these Neighbors (2).

Yeah yeah, I know, that was a bad pun, even by my standards.
Posted by Douglas Laman (NerdInTheBasement) at 9:35 AM