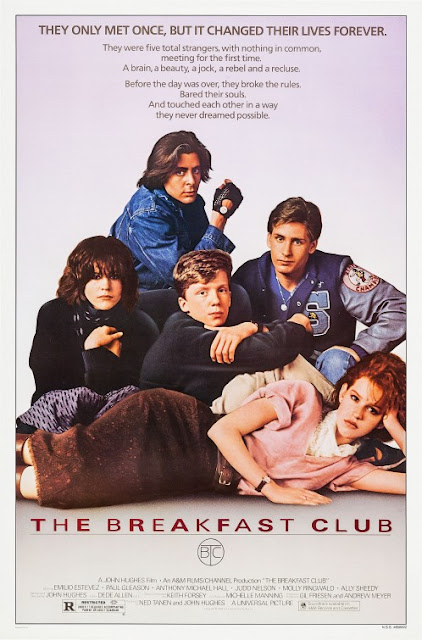 John Hughes isn't for me. After disliking Ferris Bueller's Day Off and especially Home Alone, it was a concept that crossed my cranium, but I decided to put off making any definitive statements regarding his career until I watched the movie many considered to be his greatest achievement; The Breakfast Club. Released in 1985, the feature was a sleeper hit upon its initial release and become a greatly prized motion picture in the 31 years since its debut. Millions of High Schoolers have found solace in the film and I'm so glad that they did. High School is such a miserable, terrible, awful, horrible, abysmal, hellish place and it's good to think that any piece of pop culture got so many individuals through this treacherous part of their life.

With that being said, the moment the credits began to roll on that still image of Judd Nelson raising his fist on the football field, only one thought crawled across my mind: "Oh my God, this movie is just horrible". Yeah, this one didn't resonate with me at all. Like Richard Linklater's Dazed & Confused (which would be released five years later), The Breakfast Club centers on a band of High School students and takes place over a shorter period of time. The Breakfast Club opts for a smaller ensemble cast (only five students) and sets its story in a slightly shorter time period (The Breakfast Club takes place over the course of an 8 hour long detention period rather than an entire day) than that Linklater feature and also goes for a staggeringly lower level of quality than Dazed & Confused.

The five students in question are all High School archetypes; John Bender (Judd Nelson) is the rebellious scoundrel, Claire (Molly Ringwald) is the popular girl, Andy is a jock (Emilio Estevez), there's geeky Ralph (Anthony Michael Hall) and introverted Allison (Ally Sheedy). And lemme tell ya, the majority of these characters are just insufferable to be around, especially Bender. It's obvious that the film wants the audience to identify John Bender as the super-cool scene-stealing rebel. Look! He's got weed in his locker! He talks back to teachers! And, despite sexually assaulting her earlier in the film (which the story just brushes off as "mildly annoying" at worst), he gets to make out with popular girl Claire at the end of the movie! He's the sort of character that you could see a marketing spokesman pitching by saying "Men want to be him, women want to be with him! You've heard of getting busy? Well, this is one High School student who gets bizzay!"

Problem is, Bender is, to put it gently, insufferable, and since we're stuck in one location with him the entire movie, The Breakfast Club soon morphs into an endurance test to see how long one can put up Bender's seemingly never-ending observational quips/insults. And when it comes time for his tragic backstory to get revealed, of course he's got a bad home life with an abusive father. That's not at all a rote backstory that isn't even executed in a unique manner. Hell, all the kids are like that, you can guess the "twists" in their personalities. Would you guess that maybe Andy doesn't want to be a jock? Or that maybe Allison has more to say than it seems? Or that this film irritated me to my very core? The answer to all three of those questions, especially the third, is a hearty yes.

And then, even when it attempts to subvert those High School archetypes by introducing darker material into the characters backstories (Ralph has a gun in his locker so that he can commit suicide if his grades go too south), it can't help but indulge in even more poorly done storytelling tropes, particularly in its climax, which wraps up everything in a pretty little bow. All of the weirdos accept themselves, two of the guys and two of the girls become couples with each other abruptly (Ralph is the odd man out, instead writing 1000 word essays for everyone else) and then Ralph narrates a soulful letter to an antagonistic adult figure proclaiming all of the tidy life lessons they've learned in an eight hour period as the intolerable human being known as John Bender struts across a football field. He raises his fist into the air and the film freezes on that "empowering" image as the credits roll, meaning I can't even escape this guy even as the credits go on for Christs sake!

What a tonally inappropriate conclusion for a film that, conceptually, is trying to overturn the conventions of traditionally idyllic High School storytelling. Honestly, that tonal disparity might be easier to forgive if either the light-hearted or darker elements truly worked on their own, but instead they both just add up to a larger unsatisfying whole. To be totally fair, there are certainly a few aspects of The Breakfast Club that I found to be solid, namely the performance of Ally Sheedy, who has the sort of realism both in her performance and in the writing of her character that the rest of the film fails to achieve. But mostly The Breakfast Club is a just a tonally disjointed miserable experience devoid of wit, insight or personality.
Posted by Douglas Laman (NerdInTheBasement) at 10:42 AM