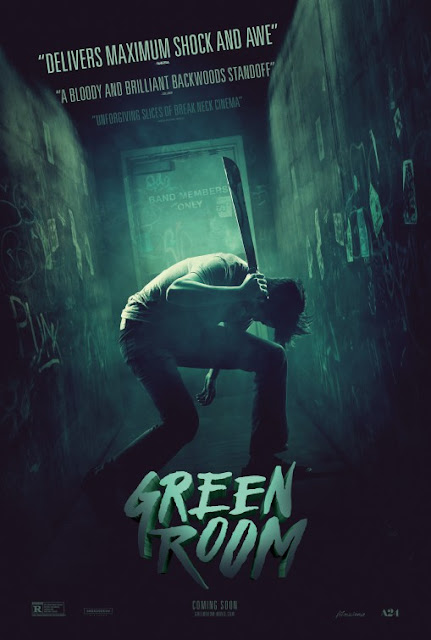 You know all the hype you've heard about Green Room for the past month or two? All of that deafening praise surrounding the newest movie from director Jeremy Saulnier? Well, I'm here today to say all of that chitter-chatter was....more than well-earned. Yep, Green Room is indeed a superb thriller, one that's packed to the gills with bloody mayhem and strong screenwriting as well as a turn from Anton Yelchin that cemented him in my eyes as a more than viable leading man.

While the second half of Green Room masterfully culminates in no-holds-barred chaos,it all starts out on a more serene note. A small-time band, whose members include Pat (Anton Yelchin), Sam (Alia Shawkat) and Reece (Joe Cole), scrounging for cash takes a gig at a sketchy (to put it gently) location inhabited by folks who drape the walls of their compound with Confederate flags and Nazi paraphernalia in the same way that I cover my bedroom wall with movie posters. Right after playing their music, the band discovers the body of a recently deceased individual stabbed in the head and the folks running this compound are not looking to let the band members go and blab about what they've seen.

From there, it basically becomes Band Members v. Neo-Nazi's: Dawn Of Bad-Ass Maeby Funke, with the various individuals in the band group, along with an ostracized resident of the compound named Amber (Imoogen Poots) trying to figure out a way to escape and take down any attackers that come their way. The attackers in question are led by Darcy, played by Jean-Luc Picard himself Patrick Stewart. It's an attention-grabbing piece of casting, but thankfully, it doesn't come off as solely stunt casting for the sake of stunt casting. Instead, Stewart conveys real intimidation every time he shows up on-screen, his legendarily commanding vocals adding an extra dash of creepiness to his various pieces of dialogue that can only be accurately summed up as "tremendously sadistic".

There are numerous elements to be found in Green Room that are responsible for its high quality, but Jeremy Saulnier's script may be one of its finest aspects. In the early establishing scenes of Green Room, the camaraderie between the various band members is depicted in a naturalistic manner that immediately conveys individual dynamics and personalities. And when the violence begins to ramp up to eleven and then some, the screenplay has a true gift for incorporating plenty of twists and turns that had me constantly holding my breath in anticipation.

Even more impressive in regards to these sudden plot turns is that they don't feel like contrived attempts to ratchet up the tension (you won't see Patrick Stewart suddenly obtain his telepathic power from the X-Men movies, for instance). Rather, they work as ways to replicate for the audience the feeling of pervasive uncertainty that our lead characters are experiencing as they fight for their lives. It's all such strong writing and Saulier shows a real gift for both character beats and concocting pulse-pounding sequences of equal levels of quality in his work here.

Anton Yelchin is an actor mostly known for his supporting role in the two most recent Star Trek films, with his only real lead roles of note coming in the form of lower-profile features like Fright Night, Like Crazy and Burying The Ex. Hopefully Green Room isn't the last time we see him headline a film though since he works super well here as a soft-spoken average guy who experiences a lot of hardship, psychopathic bigots and stabbings. The supporting actors (including the aforementioned unconventional turn from Mr. Stewart) are across the board splendid, though special notice must be given to Imoogen Poots, Alia Shawkat and Macon Blair for their well-realized turns.

In case you couldn't tell, Green Room is a film I found to be exceedingly well-written and an incredibly intense experience. In fact, it reminded me a bit of Alexander Hamilton; in that it's got a tolerance for pain and a top-notch brain.
Posted by Douglas Laman (NerdInTheBasement) at 1:15 PM