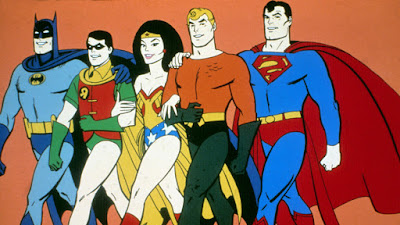 It's hard to believe Batman v. Superman: Dawn Of Justice was a real movie. Did a film with such haphazard editing really get released by one of the biggest movie studios on the planet? Did a bunch of high-profile studio executives really think the film's complete lack of a cohesive story structure or even the barest semi-competent character arc would turn BvS into the next Avengers? Christ, what a disaster. And now we have the first ever live-action Justice League movie to look forward to next year, which is being written and directed by the same folks (Chris Terrio and Zack Snyder respectively) who held those positions on Batman v. Superman. Lovely.

Apparently, the movie started filming last month, but there hasn't been a peep from the set, though word comes this morning from the highly reputable Devin Faraci over at Birth.Movies.Death of who the bad guy in the movie is. It's not Brainiac, it's not Darkseid (who got briefly and clunkily teased in BvS), it's not even Starro, the first bad guy faced by the Justice League in the comic books. Nope, it's Steppenwolf, apparently, according to Faraci's report, he's the Uncle of Darkseid, a fierce high-profile military figure and one of the uber-powerful New Gods. Darkseid will apparently briefly appear at the end of the movie before being the main bad guy in Justice League 2 (currently set for a June 2019 release), so, yay, more set-up. Cause that wasn't aggravating enough in BvS. Hopefully Steppenwolf is e-mailed clips of what Darkseid is capable of and watches them.

I have no real familiarity with Steppenwolf as a character, so maybe he's been really interesting in comics I've missed, but considering how much of a flatline the characters in both Zack Snyder DC Comics movies have been, my hopes are not high that his streak will be broken here. Interestingly, Steppenwolf appeared in a BvS deleted scene (which you can watch above) that Warner Bros. put on its YouTube channel four days into the movies release, wherein he shows off a bunch of weird darkly colored cubes to Lex Luthor. He looks like a generic CGI alien in that deleted scene, but I have a hunch in Justice League they'll be taking a cue from his visual appearance in the past comics and animated incarnations of the character where he's clearly a human being. Why do I have a hunch past Zack Snyder leading man Gerard Butler will take on the role? Just a hunch.

Now, to counteract the overly gloomy aesthetic of Zack Snyders DC movies, how about a video of a baby seal "viciously attacking" a sleeping man?

Posted by Douglas Laman (NerdInTheBasement) at 10:28 AM