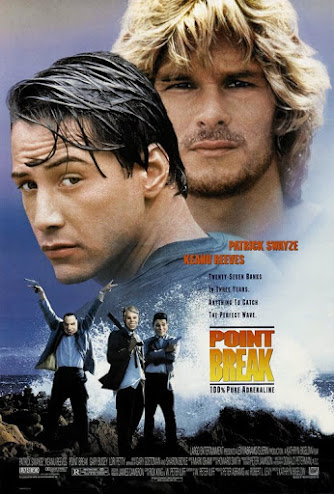 Have you ever seen a famous movie remake before you saw the remake itself? It's always an odd experience, like listening to a cover version of a Beatles tune before listening to the original Beatles track itself. That was the case with Point Break. I saw the 2015 remake of this movie years before I saw the original Kathryn Bigelow movie. If you forgot that there even was a remake of Point Break, I don't blame you. It was terrible. A bunch of grim stunts coated in green color grading, it was monotonous even if you had no attachment to the original movie. My disdain for the new Point Break, particularly in regards to its oppressively somber tone, only grows now that I've actually seen the original Point Break.
Much like with her work on Near Dark, director Kathryn Bigelow has once again delivered an exciting genre movie that doesn't ease up on either the homoeroticism or the delightful moments of lunacy. The lead character of Point Break is Johnny Utah (Keanu Reeves), who was doing the whole "ridiculous action movie name" bit long before Cypher Raige and Cade Yeager showed up. Utah is a new recruit at the FBI, where he's been partnered up with Angelo Pappas (Gary Busey) to investigate a group of bank robbers known as The Ex-Presidents. Pappas has a theory that these guys are actually surfers who use bank robberies to fund their exploits. Utah decides to explore this notion by learning how to surf and infiltrating a local surfer group.
While there, Utah becomes enamored with Bodhi (Patrick Swayze). Whereas Utah is always doing what his parents and other authority figures wanted, the only rules Bodhi follows is his own and the rules of the surf. Things get complicated in their relationship when it turns out Bodhi is the ringleader of the Ex-Presidents. Here's where all the drama comes into play, though Point Break certainly isn't short on gripping conflict before that revelation hits. Every character in W. Peter Illiff's screenplay is charged from the moment they walk on-screen, everybody seems raring to go for a confrontation. This is especially true of Utah and Pappas, the two's initial interactions seem like they're moments away from just fighting each other.
That's the perfect kind of personality for actors like Reeves and Busey to inhabit. The latter performer especially excels in imbuing his trademark unhinged sensibilities to a mentor figure that seems as unruly as the kid he's training! Such oversized and edgy figures are a perfect contrast to the far more smooth Bodhi. Just as Pappas is a great fit for Busey, so too is Swayze a natural choice for Bodhi. With his golden locks and charming face, Swayze already looks like he could be an affable surfer. Swayze's performance under the direction of Bigelow makes Bodhi a book you can judge by his cover. He makes Bodhi just as charming to talk to as he is to look at.
Of course, it isn't all acting and clashing personalities in Point Break. There's also some great action sequences, particularly a masterfully-executed chase scene between Utah and a masked Bodhi. Bigelow's camera and the editing from Howard Smith make this set-piece crystal clear on a visual level. The various backyards of a Los Angeles neighborhood also turn out to be a great place to set a footchase. Despite living in the same area, no two people that Utah and Bodhi run into are exactly alike and it's great to see the various unique personalities play off of this pursuit. It's all so sharply-realized that you're able to really soak in all the excitement of Bodhi remaining just out of reach of Utah.

That scene is my personal favorite in Point Break but God knows there's a whole bunch of other great thrilling sequences throughout the movie, many of which delight in just how over-the-top they get. Combining that with the enjoyably over-the-top dialogue and you've got yourself a movie that's brazenly eschewing reality. When you're doing action cinema this well, who needs one foot in reality? The original Point Break is so good that it makes me want to turn to the 2015 Point Break, point to its pervasive grimness and go "See all that stuff in there? That's why your Point Break never worked!"

Posted by Douglas Laman (NerdInTheBasement) at 9:44 AM