It's No Mystery Why Enola Holmes Is Such a Charming Feature 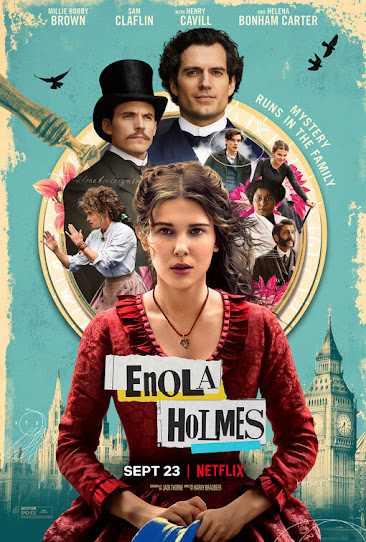 What the Harley Quinn TV show is to the Batman mythos, Enola Holmes is to the Sherlock Holmes mythos. Granted, Enola Holmes isn't as explicitly R-rated as Harley Quinn. However, neither projects are really spoofs of the famous universes they inhabit. Iconic characters like Superman and Sherlock Holmes both act like their traditional selves in each project. Additionally, Harley Quinn and Enola Holmes can function just fine as traditional superhero and detective yarns, respectively.  The approach for both projects is more interesting than just a "too-cool-for-school" lampooning. Both take place inside a male-dominated property and proceed to ask "What's it like from a woman's perspective here?"

Enola Holmes gets a lot of mileage out of asking that question about the world of Sherlock Holmes. The titular character is the younger sister of Sherlock Holmes and is played by Millie Bobby Brown. While her brothers Sherlock and Mycroft (Sam Claflin) have been off in the city, Enola and her Mom Eudoria (Helena Bonham-Carter) have been living a fine life in their little countryside home. Eudoria has taught her daughter everything from science to fencing as well as the necessity of a woman establishing her own identity. When Eudoria suddenly vanishes, so too does Enola's freedom. Mycroft is insistent that Enola be sent off to an Academy to become a "proper lady".

Enola proceeds to avert that proposal, instead setting off all on her own to find her Mom. Along the way, she makes the acquaintance of Tewkesberry (Louis Partridge), a lad hailing from a rich family who is being chased down by the mysterious but violent Linthorn (Burn Gornam). While figuring out why Tewkesberry is being hunted down and what happened to her Mom, Jack Thorne's screenplay for Enola Holmes doesn't shy away from working as an actual mystery. The clues are hiding in plain sight, they pay off in a satisfying fashion, and the inevitable surprises feel earned rather than just a strained attempt to create suspense.

It's always a treat to see something aimed at kids that isn't afraid to believe kids deserve coherent stories too. Similarly, it's nice that Enola Holmes' adventures don't ever feel like they're being diluted down for youngsters. Linthorn especially is a vicious baddie who isn't afraid to interrogate Enola by way of jamming her head into buckets of water for prolonged periods of time. These flashes of darkness make Enola's wins actually register as impactful. As Neil Gaiman once said, "In order for stories to work — for kids and for adults — they should scare. And you should triumph." In Enola Holmes, viewers get those vital moments of dread but also those equally important moments of victory.

On the downside viewers also get in Enola Holmes a laggy second-act that too often functions as just setting up pieces for the big finale rather than as entertaining storytelling on its own merits. Additionally, the bolder visual tendencies of director Harry Bradbeer's run up against recurring instances of unimaginative camerawork in the more low-key dialogue-heavy sequences. Keeping Enola Holmes engaging enough even through its most flawed patches is lead actress Millie Bobby Brown, who truly comes alive in her feature film lead role. Delightfully, Brown has opted for a part that's basically as far away from her breakthrough role of Eleven in Stranger Things as you could possibly get.

Brown's been known to most audiences as a quiet figure whose default speaking mode is through whispers. In Enola Holmes, Brown's charisma is on full display in her extended asides to the audience and her sharp handling of verbal comedy. Brown proves delightful enough portraying Enola Holmes that she's reason enough to give the whole movie a watch. The rest of Enola Holmes isn't quite as memorable as Brown's lead performance but it still proves to be a thoroughly charming watch. Most impressively is the fact that I could see Enola Holmes working just as well for Arthur Conan Doyle aficionados as it will for younger newcomers. Chalk that up to how, like that Harley Quinn TV show, Enola Holmes knows how to respect the past while finding fresh new stories to tell.

Posted by Douglas Laman (NerdInTheBasement) at 10:58 AM