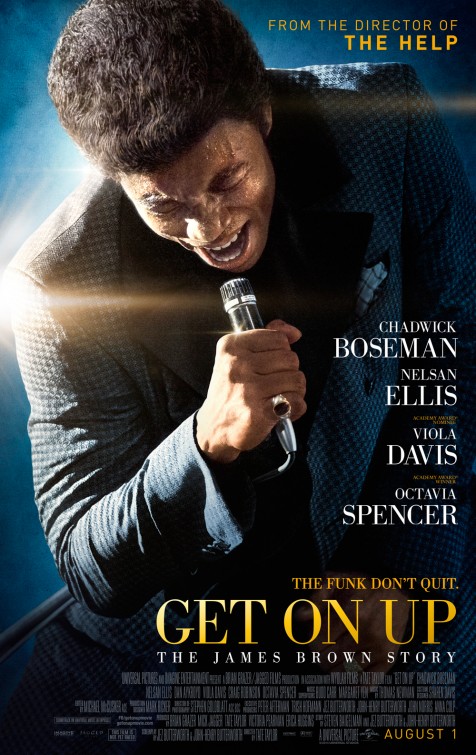 I’ve never really been a fan of director Tate Taylor’s movies. From everything I’ve read and heard, he seems like a very nice guy, as indicated by how numerous actors (ranging from Octavia Spencer to Allison Janney to Luke Evans) have worked with him repeatedly. It’s also neat how he’s constantly making high-profile movies in a variety of genres starring women. Still, the likes of The Help and The Girl on the Train left me more cold than enamored. So imagine my shock that, upon watching Get On Up, I saw a liveliness in his filmmaking that I couldn’t believe. Where has this Tate Taylor been hiding and how can we get more of him?

Get On Up is a music biopic based on the life of famous singer James Brown (portrayed by Chadwick Boseman). You’d be forgiven for recoiling back at the words “music biopic”, a genre whose track record isn’t exactly exceptional. The fact that the first scene shows an elderly Brown walking towards a stage before a flashback sets in (he has to think about his entire life before he plays) had me very worried I was about to watch a paint-by-numbers entry in this genre. A subsequent scene depicting Brown pulling out a shotgun in a bank because somebody used his toiler began to assuage my concerns. This particular sequence, which is totally gonzo but hints at a lifetime of tragedy, is a much better indicator of what’s to come.

From there, we hop around various passages of Brown’s life, ditching the linear approach that most music biopics utilize. These passages include his days growing up with Aunt Honey Washington (Octavia Spencer), his ascension to fame as a singer that saw Brown breaking all the rules and Brown’s struggles to keep his friends nearby. All of these events are informed by Brown’s childhood experiences of being abandoned by his parents, including his mom Susie (Viola Davis). When you’re a kid and you have to scrape by to survive, it does something to your psychology. You begin to look out for only yourself because, heck, isn’t it hard enough to survive without worry about others?

Throughout Get On Up, we see how Brown looking out for himself informs so much of his life. Sometimes, this manifests in Brown undercutting shady business practices meant to deprive Black artists of their financial autonomy. The music industry is constantly saying what a Black artist can and can’t do. But Brown’s always been upending expectations, why wouldn’t he do the same here? Other times, it manifests in more tragic ways. His abusive and possessive attitudes against his wife, Dee-Dee (Jill Scott), reflect a cycle of toxic behavior tragically continuing on. Brown is now behaving like the very man (his own abusive father) that brought him and his mother such torment. Meanwhile, he undermines his bandmates, including longtime friend Bobby Byrd (Nelson Ellis), at every opportunity.

Many music biopics settle for being a rehash of an artist's Wikipedia page. There isn’t any real thought given to why an artist did this or how. We just know that they sang this song or wore this outfit, so the standard music biopic has them sing that song or wear that out outfit. All surface, no depth. Get On Up, meanwhile, has all the staples of Brown’s discography, but it’s also intrigued by what informed this musician. What fueled his trailblazing style? As indicated by a poignant visual that closes out a police chase, Brown’s work was informed by him always being that traumatized child who was left behind by his mom and dad. The pain of losing loved ones left such an impact on Brown that he pushed others away to avoid ever experiencing that pain again.

The screenplay by Jez Butterworth and John-Henry Butterworth isn’t a perfect creation in terms of thoughtfulness. Women characters like Dee-Dee certainly could have used an extra jolt of personality. For the most part, though, the script for Get On Up works wonders into getting inside James Brown’s head. This is especially apparent in creative segments where Brown breaks the fourth-wall to explain his perspective to the audience. Sometimes, this manifests in comedic scenarios, like Brown gradually realizing his Christmas television show performance is for an entirely white audience. Other times, like an extended monologue where Brown explains how he’ll upend traditional booking practices, give you a real glimpse into the unique headspace of this musician.

That particular scene also allows lead actor Chadwick Boseman a chance to really shine. Walking between two different sets and constantly keeping his eyes locked on the viewer, Boseman relays Brown’s plan with such riveting confidence. That quality is also apparent during any sequence where Brown is on-stage performing. Boseman’s vocals and footwork aren’t just great at mimicking James Brown, they’re also thoroughly impressive in their own right! Meanwhile, the moral complexity of the character, an authentically messy portrait of someone who has survived abuse, is something Boseman handles with real grace in his performance. He’s able to portray both the abrasive and haunted sides of Brown with equal levels of conviction. You don’t find a performance this good in your average music biopic and Get On Up is most certainly a welcome unorthodox entry in the genre.