Get Duked! Find Dark Humor and Likable Characters in the Scottish Highlands 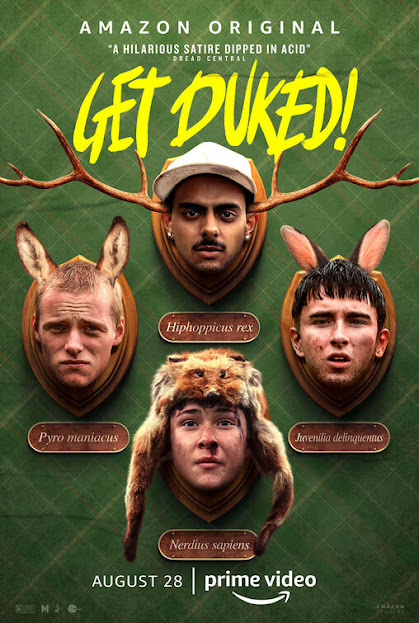 The Duke of Edinburgh Award has a prestigious past. An annual award given to adolescents presenting noble characteristics, you must trek through the Scottish Highlands and work together with a group of similar-aged peers in order to receive it. The newest people to pursue this honor are a trio of troublemakers, Dean Gibson (Rian Gordon), Duncan McDonald (Lewis Gribben), and DJ Beatroot (Viraj Juneja), as well as a much more well-behaved kid named Ian Harris (Samuel Bottomley). From the start, the trio of doofuses are making this expedition difficult with their antics that involve tearing pieces off their only map. Problems only escalate when they start getting hunted by The Duke (Eddie Izzard).

Now the four students have to work together even as the bullets are flying and their lack of expertise with roughing it in the wild grows increasingly apparent. That’s the central gist of Get Duked!, a new dark comedy written and directed by Ninian Doff. In his directorial debut, Doff establishes a filmmaking style that owes quite a bit to two other dark comedy European filmmakers, Edgar Wright and Danny Boyle. The rapid-fire editing, particularly in opening montages establishing the backgrounds for the four protagonists, totally evoked the kind of super-speedy visual gags you’d find in any wright production.

Meanwhile, the camerawork and editing of scenes depicting the four leads evading The Duke has an immersive quality that channels Boyle’s work behind the camera on the original Trainspotting. If these sound like complaints, they’re really not. Wright and Boyle are great filmmakers and if you’re gonna channel other directors, why not evoke the best? Plus, Doff’s got his own unique visual touches that ensure he isn’t just leaning on directors of the past. The pulsating visual quality used to indicate when somebody is high on a drug exclusive to the Scottish Highlands is especially distinctive.

Boff’s screenplay, meanwhile, works quite nicely in juggling a dark comedy with a genuine love for the characters he’s writing. This is particularly evident with how he handles the character of Ian. Another movie would have taken the easy way out and just written the character as a whiny wet-blanket. Instead, Doff goes in a more interesting direction by establishing that Ian has got his own insecurities to deal with. These help him to gravitate towards fellow social outcasts Dean, Duncan and DJ Beatroot. When it comes to the four lead characters, Doff finds more humor in bringing them together than keeping them apart.

This upbeat approach extends to the other characters, including DJ Beatroot and his rap ambitions. The fact that his music is shown to be something that can unite people rather than just a quirky trait to be derided is a neat detail. Even dim-witted Duncan isn’t just played for laughs, there’s an endearing quality to the shallow logic he works with. Doff’s affection for his character informs the sociopolitical commentary that provides the foundation for Get Duked! Much like in the real world, there’s a rigid social hierarchy in Get Duked!. This hierarchy adversely affects lower economic classes badly that people already resign themselves to cutting up fish on a conveyor belt for their entire lives as teenagers. After all, what else is there to hope for?

This quality informs The Duke and his companions hunting down Ian and company. “We will win. We always do,” The Duke intones, in the process representing all privileged classes that see new younger generations as a threat to their world. Get Duked! isn’t groundbreaking in its social commentary but it does provide a fine core to fuel the rest of the movie. It isn’t all just empathetic characters and sociopolitical commentary in Get Duked!, though. There’s also instances of killer (sometimes literally) dark comedy in this movie that establishes Ninian Doff as a filmmaker worth keeping an eye on.

Posted by Douglas Laman (NerdInTheBasement) at 11:13 AM