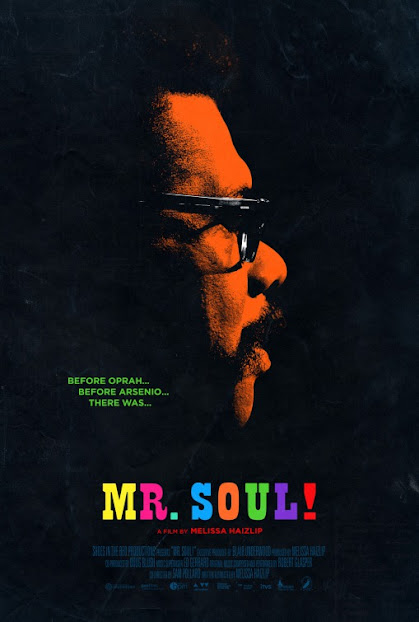 As the documentary Mr. SOUL! opens, the viewer is introduced to the political zeitgeist of the late 1960s. It's a turbulent time. Protests over the rights of Black Americans are everywhere. The National Guard is called into cities not to curb race-based police brutality but to squelch protestors. And as Richard Nixon enters the White House, he does so with a perception of "the media" being a Liberal tool designed only to hurt him. Time is a flat circle. It's been fifty years yet the America Mr. SOUL! presents looks so similar to America in 2020 (save for nobody wearing masks). Luckily, something more positively enduring is about to enter the country in the form of the public broadcasting TV show SOUL!

Whereas traditional TV depictions of black people focused on poverty and suffering, SOUL! was something far more thoughtful. Debuting on the channel NET in 1968, SOUL! was a show dedicated to showcasing Black artists from all walks of life. Ballet dancers, poets, singers, child magicians, everything under the sun showed up on SOUL! as a way of reaffirming the truth that Black people can do anything. The program was hosted by Ellis Haizlip, a host who had a calm demeanor but was always looking to push the boundaries of what you could show on television. American norms said a program like SOUL! could never be popular. Haizlip was constantly saying "Just wait and see."

Directed by Melissa Haizlip, Mr. SOUL! proves to be an incredibly engaging watch. Part of that is due to how well put-together the production is. Part of it is also due to how Mr. SOUL! smartly relies on footage from original broadcasts of SOUL! We don't just hear people talk about how influential SOUL! was, we get to see it for ourselves. Watching The Last Poets perform their verses on the show, for example, perfectly captures how boundary-pushing this program was. Can you imagine a TV show even in 2020 dedicating time to any kind of poetry, let alone poetry as challenging as the works of The Last Poets? But throughout Mr. SOUL! viewers get to watch and see that SOUL! made such impossibilities a reality each week.

Frequently, archival clips of musical, poetry, or dance performances are accompanied by modern-day interviews with the artists themselves. The likes of Ashford & Simpson reflect on how their performances on Soul! positively impacted the rest of their career. We don't just get glimpses of the past in Mr. Soul! Director Melissa Haizlip also lets us see how this TV program had major ripple effects that are still reverberating to this day. Take one woman who recounts how watching an interview between Nikki Giovanni and James Baldwin (wow, now there's a duo I could listen to for hours on end) inspired her to rethink what was possible for Black women to accomplish in the field of arts.

Truth be told, just watching old clips of SOUL! segments and retrospective interviews alone would have been enough to make Mr. Soul! a great documentary for me. How can you complain about hearing insightful anecdotes from Sidney Poiter or wonderful musical performances from the likes of Stevie Wonder and Tito Puente? But Melissa Haizlip lends the last third of Mr. SOUL! an extra level of weight as tragedies befall both SOUL! as a program and Ellis Haizlip. It's a development that stings so hard because, for its five years on the air, SOUL! was like an oasis. The hardships that face Black people in the real world could be responded to here through artistic means, they were not ignored. But their actual presence was kept in the outside world. This was a space for communication, not anguish. There was enough of that on the nightly news.

Now, realities, including insistence from President Nixon to cut public funding for TV shows starring Black people, were crashing into SOUL! while Ellis Haizlip dealt with personal tragedies in his family. Mr. SOUL!'s vivid depiction of the joys of SOUL! make the struggles that led to its cancellation all the more poignant to watch. Though its lifespan wasn't long, a closing montage shows that the impact of SOUL! and the ideas it stood for go on and on. It's a beautifully edited scene that closes out the film on a heartfelt note that feels perfectly in keeping with SOUL!'s central idea of providing hopeful & varied, rather than tortured & generic, media depictions of Black people.

One of the most frustrating things to encounter is when a movie is clearly a fan of some pop culture but it refuses to share with the viewer why it loves that pop culture so much. Think the worst moments of Ready Player One or Stranger Things. It can be like watching your friend hog a video game. You get that they like it, but you never get the chance to find out why. The opposite is the case for Mr. SOUL!, which is a prime example of how a movie can make its pop-culture fixation infectious rather than insular. Whether you're coming to this documentary a lifelong SOUL! fan or you're like me and walking in totally unaware of the show, Mr. SOUL! will make you a devotee to Ellis Haizlip and his classic TV program. Some things truly never go out of style. That includes trailblazing TV shows and documentaries as well-crafted as Mr. SOUL!

Posted by Douglas Laman (NerdInTheBasement) at 11:32 AM