Superman Returns Is A Rote Rehash of Past Superman Movies 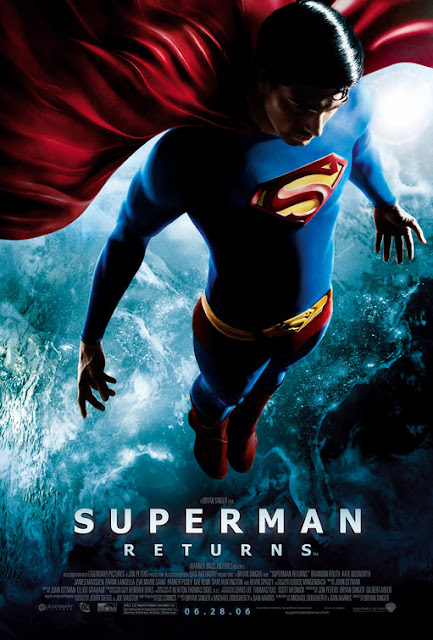 Oh, what a puzzle Superman Returns is.

Describing how Superman Returns goes awry makes one sound like they're just contradicting themselves. At once, Returns is a film that's too dour but also too goofy. It's got too little action for long stretches but what action we do get is pretty uninvolving. It's slavishly devoted to the original Christoper Reeve Superman films (complete with recreating the final shot of Superman II) yet struggles to understand what actually made those classic movies work. While those grievances may all sound like vague paradoxes, they're also all true. Superman Returns strives to be the kind of epic movie event that soars above all other blockbusters. Instead, it just falls to Earth. Hard.


Following up on the events of Superman and Superman II (nobody even bring up Richard Pryor or rebuilding the Great Wall of China with your eyeballs), Superman (Brandon Routh) has been away from Earth for five years. Why? Well, he was investigating newly-discovered remains of Krypton in hopes of finding other members of his species. The mission proved a failure. Superman is all that's left of his kind. Now, he and his mild-mannered alter-ego, Clark Kent, have returned to their usual activities on Earth. This means Superman is back to saving people all over the world and Kent is back to being a dorky reporter at the Daily Planet.

As Superman Returns ran out its 154-runtime, it began to dawn on me how truly unengaged I was with what I was watching. This is despite the fact that Superman Returns is trying its hardest to follow in the footsteps of two superhero movies I highly enjoyed. It's got the theme music, voice-over work from Marlon Brando, and jokes referencing lines from the first two Superman movies. Of course, fan-service alone cannot drive a movie. But in the case of Superman Returns, the reason its fan-service doesn't even deliver the expected burst of serotonin is because of how mechanical it all is. Screenwriters Michael Dougherty and Dan Harris, as well as director Bryan Singer, keep bringing up famous Superman stuff but they do it so lifelessly, like they're checking things off a list.

For example, Lex Luthor had a wacky sidekick played by Ned Beatty in the original film, so here he has a similar comical sidekick played by Parker Posey. Jimmy Olsen, Martha Kent, and Perry White were all in the original Superman movies, so here they are again without personalities or active roles to speak of. Lex Luthor had a big o'l real estate scheme in Superman: The Movie so here we go again with that. Superman Returns is like a band lifelessly replaying hit songs that came out decades ago. The notes are familiar but the once-interesting performance is now creatively hollow.

Maybe the execution of these familiar elements would be better if the film weren't so darn serious? For the second time in the 21st-century, Superman has gotten saddled with a solo movie that's just so dang dour. Only an early airplane rescue sequence evokes any of the sense of wonder or joy you'd want in a Superman movie. Otherwise, this Superman is just moping over Lois Lane and a child that may or not be his. An overdose of moody dark lighting from cinematographer Newton Thomas Sigel further compounds the oddly bleak aesthetic of Superman Returns. Such an aesthetic manages to suck all the potential awe out of scenes like Superman stopping the Daily Planet globe from crushing Perry White. It's not just an atmosphere that feels ill-suited to this character, it's just a boring atmosphere to be stuck in for 154 minutes.

Even the third act is plagued with moodiness. This is the part of superhero movies where the excitement should be building and all kinds of fun moments lie in wait. Instead, Superman Returns makes the baffling decision to have Superman face off against a gigantic Kryptonite island. Having Superman just face a big pile of rocks is already a dramatically inert concept. Yet, the fact that it happens in the middle of the ocean, that's an even more puzzling choice. This means Superman's final battle in Superman Returns is divorced entirely from the general public. Save for Lois, Jason, and Richard briefly being around just so Superman can rescue them, this means Superman is isolated for much of the final stretch of Superman Returns. What a shame since the fun of prior Superman movies was seeing him save civilians or how his actions influenced civilians.

Well, I suppose Superman isn't totally isolated. Lex Luthor and his goons do briefly share the screen with the Man of Steel in an oddly brutal scene where a depowered Superman is just beaten to a pulp by Luthor's minions. They even shove Superman's face into a puddle in an attempt to drown him. What a strangely dark sequence that does not fit all with so much of the rest of the movie's tone. For example, just twenty minutes later, Lex Luthor's whole plotline gets wrapped up with a "comedic" note involving a helicopter fuel tank that should be accompanied by a "womp-womp-womp". How did we go from realistically torturing Superman to these wacky hijinks?

Superman Returns is veering all over the place in tone but it's never doing so in an interesting fashion. This isn't an Ang Lee's Hulk where messiness is a feature, not a bug. This isn't even Sam Raimi's Spider-Man 3 where something that's overstuffed at least shows glimmers of admirable ambition. Superman Returns is a dour fan film trying to mimic the original Superman movies so hard but it doesn't have the heart or the commitment to sincerity that made those movies work. Worst of all, Superman Returns lacks humanity.

There's no discernible human quality in scenes where Lois is bitter over Superman abandoning her. The relationship between Superman and his potential son is thinly-developed, rendering a final scene where Superman regurgitates lines from his Kryptonian dad to Jason just weird fan-service rather than something poignant. Lex Luthor is just a bunch of boring hamminess from Kevin Spacey, there's never any reason to fear or be entertained by him. The complete lack of humanity leaves poor lead actor Brandon Routh with nothing to work with despite the fact that he actually works decently as Superman. Superman Returns knows what older movies it needs to mimic and comic book lore it needs to reference. But making an actually engaging and fun movie? That exceeds the grasp of Superman Returns.

I guess this means the best 21st-century movie Superman has appeared in is Teen Titans Go! To The Movies by default...

Posted by Douglas Laman (NerdInTheBasement) at 10:54 AM