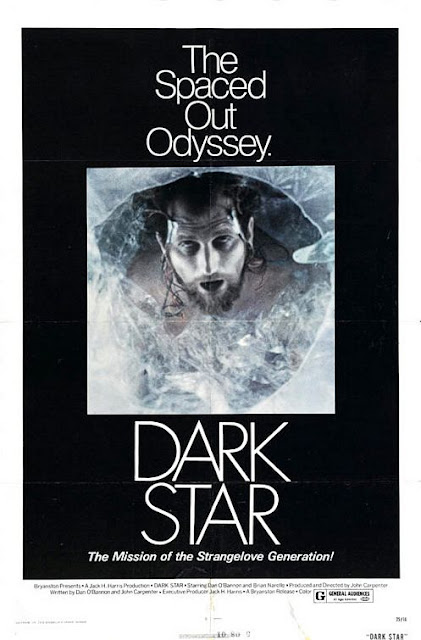 I'll freely admit that I went into Dark Star with low expectations. Chalk that up to the fact that its own creative team hasn't spoke fondly on the project since its 1974 debut. Screenwriter Dan O'Bannon even went as far as to label it "the world's least impressive professional film". With that informing my pre-viewing perception of Dark Star, is it any wonder I was going into my viewing on the dubious side of things? In a happy turn of events, though, it turns out that Dark Star is actually pretty good! John Carpenter's directorial debut has its rough patches, no question. Yet, it impresses in its dark humor and crafty filmmaking as well as in how it indicates certain elements that would be prevalent in Carpenter's filmography going forward.


Dark Star takes place in the distant future of the 22nd-century. A scout ship by the name of Dark Star is home to a crew of astronauts that include Doolittle (Brian Narelle), Pinback (Dan O'Bannon) and Talby (Andreijah "Dre" Pahich). In a prominent example of Dark Star's satirical humor, this cosmic voyage is loaded with advanced technology used for a singular purpose: bomb any planets that might get in the way of Earth colonizing every planet in existence. Mankind has all kinds of tools at its disposal and it's using them to spread destruction in the name of imperialism. No wonder the main astronauts are depicted as arrogant and uncaring souls.

Luckily, these astronauts are rarely successful in their missions thanks to all kinds of chaos occurring on the spaceship. These include malfunctioning technology on the ship as well as a sneaky alien that makes Pinback's life a nightmare. That alien is at the center of the best stretch of Dark Star concerning a Bugs Bunny/Elmer Fudd like dynamic emerging between the alien and Pinback. This extra-terrestrial is constantly getting the better of Pinback and manages to eventually get this human being stuck in an elevator shaft. Once that happens, Dark Star turns into a genuinely suspenseful thriller as Pinback tries to get to safety all while avoiding the malicious nature of his alien adversary.

Speaking of that alien, let's take a moment to appreciate the design of this otherworldly being. The alien in Dark Star is brought to life through some monster flippers and a gigantic painted beach ball. Clearly, every aspect of this creature's design has been influenced by Dark Star's extremely low-budget (Dark Star only cost $60,000 to make). However, the design of the alien turns out to be ingenious for creating intrigue. Because there's no face on this being, you never know what it's thinking. Is the alien happy? Sad? Angry? You're as uncertain about what the alien will do next as Pinback! The stripped-down appearance of the alien may have been due to budgetary constrictions but it ends up being a boon for creating suspense.

Meanwhile, the human characters of Dark Star aren't quite as interesting as the aliens, with ostensible protagonist Doolittle being especially vaguely-defined. Luckily, that doesn't end up being a killer problem for Dark Star for a number of reasons. For one thing, the movie runs 83 minutes including brief credits. In that brief space of time, the more shallow nature of Doolittle and company doesn't become a major hindrance. On another note, it also helps that the focus of Dark Star isn't on exploring character arcs for figures like Pinback. O'Bannon's script is centered squarely on the dark humor and suspense. The human characters function primarily as broad embodiments of mankind's worst impulses.

They reach for guns at the first sign of danger, they're uncaring towards other people and they view the cosmos as just a playground for their own conquest. The people of Dark Star aren't super detailed creations and that's partially the point. This trait allows them to better serve as reflections of the nadir of humanity just as characters in future Carpenter movies like They Live and Escape From New York would. As an added bonus, having the characters of Dark Star function in this manner also makes it a lot of fun to watch them endure all kinds of struggles at the hands of aliens and overly committed sentient bombs. That's some very smart screenwriting and it's just the kind of ingenuity that made Dark Star considerably better than my pre-viewing expectations.
Posted by Douglas Laman (NerdInTheBasement) at 12:09 PM