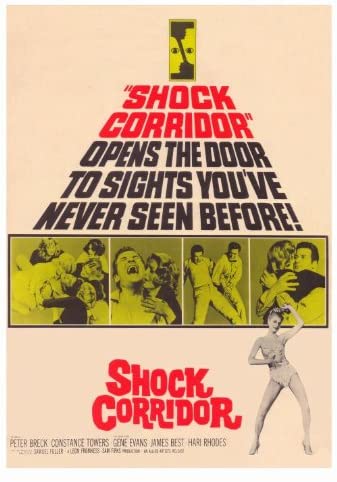 The works of Samuel Fuller were boundary-pushing in the best possible way. They weren't shallow edgelord poppycock, Fuller's films were actually dangerous.  They dared to cover topics that were taboo (and even still are) in mainstream Hollywood, including authentically messy portrayals of racism. Fuller wasn't afraid to make audiences uncomfortable and that talent is certainly around in his 1963 feature film Shock Corridor. Fuller's script is based around an idea that, in basic outline form, sounds like it might make a decent half-hour campfire story. In the hands of Fuller, though, it becomes something more haunting that comments on the uncaring nature of humanity.


Such a nature is embodied by Shock Corridor's protagonist, journalist Johnny Barrett (Peter Breck). He's convinced he knows how to crack an unsolved mystery at a mental hospital. He'll go to the hospital, pose as a patient, and figure out the killer from the inside. Despite the protests of his girlfriend, Cathy (Constance Towers), Barrett goes along with the scheme in hopes of securing a Pulitzer Prize. Never mind the fact that he'll be using patients at a mental hospital as tools for his success. This aspect of Barrett's character reflects how Shock Corridor constantly highlights mankind's tendency to cast others, particularly those perceived as "the other", aside in the name of one's own goals.

Once Garrett is inside under the fictitious pretense of having sexual fantasies with his sister, he discovers three inmates at the hospital who may just know the true murderer. He begins to interview them one-by-one. The individual interview process is when the tragic nature of Shock Corridor really becomes palpable. Garrett is only interested in Stuart (James Best), Trent (Hari Rhodes), and Boden (Gene Evans) for the information they can give him. But in their dialogue, all three men reveal to the viewer that they're far more than the hopeless cases both Garrett and the hospital staff see them as. Fuller grounds the backstories for each of these three men in very specific woes that explain why societal forces in America would just shut them up in a mental hospital.

For example, Stuart has spent his entire life being indoctrinated. First, there was his childhood where he was taught to embrace bigotry by his parents and then his time spent as a prisoner-of-war during the Korean War when he was brainwashed into being a Communist. Stuart has never had a chance to establish his own identity and that's especially true ever since he returned home to the United States of America to a dishonorable discharge. A man Garrett sees as just a ticket to fame and glory is actually a much more complex human being. To boot, he's a person that's been deemed an outsider by American society for forces beyond his control. Fuller's script is quietly suggesting to deviate from the norm in America is to sign your own death warrant.

This idea is even more vividly conveyed through the backstory for Trent. Being a Black person, Trent was already considered "the other" by traditional American society the moment he was born. One of the first students to integrate into a Southern university, Trent has experienced so much racial hardship that it's warped his mind. He now believes himself to be the very people who have brought so much suffering into his life. Trent believes he's a white member of the Klu Klux Klan that spouts white supremacist propaganda in the hallways of the hospital. Societally-acceptable racism in America has led to Trent's current state. As for Boden, well, his mental state (which reduces him to being basically six-years-old) is a result of him witnessing the devastating destruction of America's nuclear missiles.

All three of these hospital patients have been brought to their current state by some terrible aspect of American society that's treated as a normal part of life. The jingoism that spurred the Red Scare. Racism. Nuclear war. Let's also not forget the desire to achieve riches at any cost that motivates Garrett's hospital stay. With Shock Corridor, Samuel Fuller isn't just humanizing members of society frequently dismissed as lost causes. He's rooting their turmoil in specific modern-day tragedies that the audience can't turn away from. The societally-ingrained problems that led these three men here are not things of the past in 1963 or in 2020. They're still here. They're still rampant. And they, and the people impacted by them, are still being dismissed.

The humanity of these three characters is reinforced through Fuller's bold filmmaking tendencies. Whenever one of these three men is talking about their life, they're accompanied by brief bursts of fully-colorized footage. Shock Corridor is otherwise entirely in black-and-white, so these sudden momentary lapses into a more varied color palette really stick out. Such vivid colors only appearing in flashes on-screen hauntingly reflects how these characters only have similarly short returns to their original mental state. Soon, the monochromatic color scheme of Shock Corridor returns, as does their warped mental health state.

This aspect of Shock Corridor is one of many instances in the movie where Samuel Fuller's takes on such a modernist approach. It's fascinating to see a mainstream American movie from 1963 using such unorthodox editing cues or extended single takes. In a way, Shock Corridor feels like Fuller was utilizing filmmaking techniques that were just about to explode onto the American film scene. A few years after Shock Corridor was released, similarly bold editing and camerawork choices were apparent in the likes of Bonnie & Clyde and Easy Rider. Fuller's visual tendencies were just as ahead-of-their-time as the boundary-pushing material he incorporated into his scripts. Between this and White Dog, Fuller knew how to make fascinating thrillers based around provocative premises that don't just rely on shock value to garner a response from the viewer.
Posted by Douglas Laman (NerdInTheBasement) at 11:42 AM