Premature Captures Teenage Angst Both Intimately and From a Distance 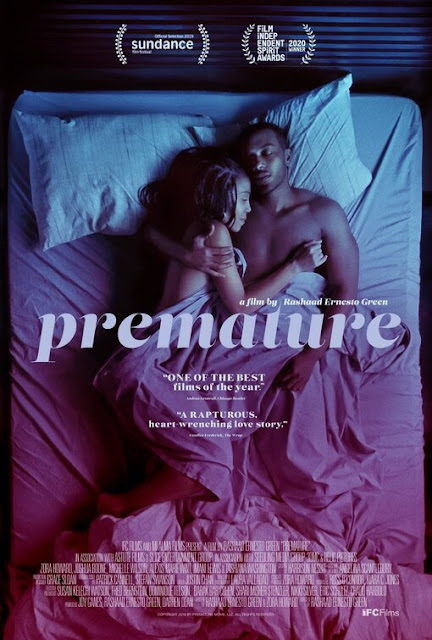 Seventeen-year-old poet Ayanna (Zora Howard) is preparing for a lot of big changes in her life. She's about to leave her small home in Harlem for college. The next phase of her life is about to begin. But before that monumental change occurs, it's time for one last summer vacation. Over the course of this summer, Ayanna begins to take up a romantic affair with an older man by the name of Isaiah (Joshua Boone). Ayanna becomes enamored with him, though Isaiah doesn't just bring joyful romance into Ayanna's world. He also brings a number of challenges into her life, including Ayanna grappling with feelings of jealousy as well as helping to stir up animosity between Ayanna and her mother.


Directed by Rashaad Ernesto Green and written by both Green and Howard, Premature is an extremely well-done take on the coming-of-age story full of unique little flourishes. Among those distinct traits is the occasionally voyeuristic filmmaking of Green. Early scenes especially see Green filming things in a manner that's meant to evoke the point-of-view of somebody whose watching Ayanna and her friends from afar. For example, an early scene of Ayanna meeting Isaiah see's the camera positioned just behind a gate a short distance away. Whenever the gate partially obscures the two characters, the camera jiggles its position just a little bit so that it can see clearly again.

It's an intriguing way to simulate the idea of immersion. The camerawork in Premature isn't solely meant to put us in the POV of the characters or even right next to them. Scenes like Ayanna and Isaiah walking in the park are filmed in wider shots with angles meant to reinforce the idea that we are also in this park, watching from afar. In addition to imbuing the quality of immersion, this stylistic choice reinforces how Premature is focusing on characters who are typically reduced to the background in many Hollywood productions. In another movie, Ayanna and Isaiah might just remain figures in the distance of a wide shot. In Premature, we follow their story through the whole movie.

While some of the most memorable shots in Premature are also its most expansive, Green also works well with more intimately-filmed scenes. Such camerawork is utilized heavily anytime Ayanna is chatting her three friends on the train, in the park, or in a restaurant. Truth be told, I could have watched any of the conversations between Ayanna and her friends for hours on end. Green and Howard give these sequences such naturalistic dialogue. Meanwhile, the rapport between the four actors is equally organic, they easily come off as a gaggle of long-time friends who would be there for each other no matter. The individual performers are also immensely entertaining to watch bounce off one another. Their chemistry is, perhaps, the most enjoyable part of Premature.

On the opposite side of the tonal scale, some of Premature's attempts at teenage drama (such as a third-act development between Ayanna and Isaiah) could have used a bit more unique personality to help separate it from other coming-of-age yarns. The dramatic storylines that do work, however, are quite successful. This is particularly true of the complicated relationship between Ayanna and her mother. Green and Howard smartly refuse to sand off the edges of this bond. The two characters have a volatile dynamic that can switch from support to frustration to sadness at the drop of a hat. The fact that it ends on aa hopeful but also far from perfect note shows a lot of ingenuity on the parts of the writers.

Zora Howard's acting in the role of Ayanna is just as thoughtful as her writing. She makes for a compelling lead to follow around and I especially like how she conveys Ayanna's understandable confusion with how to navigate adult-world problems for the first time. Howard's recurring narration, where she reads aloud Ayanna's poem that reflects the characters' mood, also works nicely. Both the writing of these poems and Howard's voice-over work nicely captures that sense of teenage romantic melancholy. In this part of your life, every movement of the person you love has a thousand different meanings, all of them at once totally understandable and yet totally indecipherable. This unique chapter in one's life is thoughtfully-realized by Premature.
Posted by Douglas Laman (NerdInTheBasement) at 10:15 AM