Greyhound Lends A Human Touch To Wartime at Sea 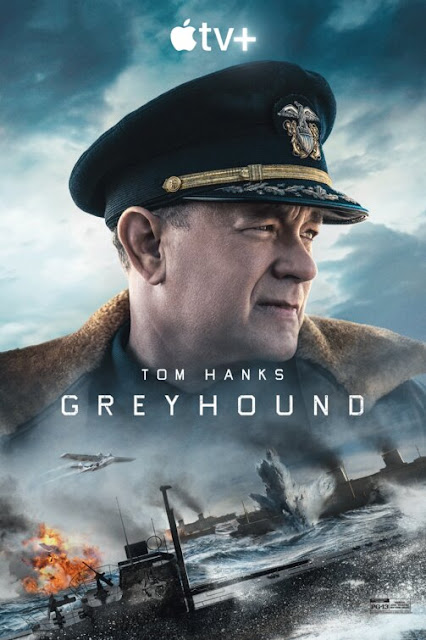 Most war movies tend to star very distinctive protagonists. A mythic general. The soldiers who planted the flag at Iwo Jima. A soldier who refused to fight. Those kinds of people. Perhaps the most unique quality of Greyhound is that its lead character is intentionally framed as someone who isn't all that remarkable. Commander Ernest Krause (Tom Hanks) isn't really a notable person. His presence in this war isn't in and of itself a massive achievement. He's just a guy who has got a lady back home and would very much like to survive his time serving in World War II. Putting this guy front and center in a war movie see's Greyhound positing the idea that wars are not fought by legends, they're fought by everyday human beings.


Krause is in charge of a U.S. naval ship given the code name Greyhound (hey, that's the name of the show!) He and his men are given a mission of protecting a whole bunch of U-boats from enemy forces so that they can get to the front lines. This imposing mission becomes even more complicated when the squadron of boats begins to be followed by an enemy submarine named Grey Wolf. From here, Greyhound's story is pretty simple as Krause tries to get to his destination while protecting as many boats and human lives as he can. The less casualties the better, though the bloodthirsty Grey Wolf sub feels differently.

Whenever it has a chance to, Greyhound's chooses to eschew a hagiographic approach to this story. For one thing, the proceedings run only 84 minutes before credits begin to roll. That's a sharp contrast to the lengthy two-and-a-half-hour runtimes that so many war movies employ. Such an old-school epic runtime is totally absent here. Meanwhile, director Aaron Schneider opts for a more stripped-down grounded filming style rather than anything that would lend a sense of bombast to the film. Greyhound is primarily told in blue hues with minimal slow-motion or other visual traits that might reduce everything to looking like an ad for a Call of Duty video game.

Meanwhile, the screenplay by Tom Hanks (only the performers' third script) translates this aesthetic by emphasizing that, out here on the battle lines, everybody's equal. A friendly cook gets the same somber funeral as men who were working on the boats cannon. Krause is shown to be just as vulnerable and unsure as the people he's commanding. Even enemy soldiers get a note of humanization. After an enemy submarine is destroyed, one of Krause's subordinates remarks "50 more Krautes dead!" only for Krause to remind him that, in reality, "50 men are dead". The more nuanced reality Hanks incorporates into his script for Greyhound is probably the most distinctive trait of the project.

A stripped-down aesthetic works to Greyhound's benefit in some respects but it does prove an issue in others. Chiefly, it's sometimes hard to get invested in the extended sea warfare due to there not being an abundance of super developed characters on-screen. The lack of personality across the crew members of Krause's ships is helpful in establishing the idea that nobody is more important than anyone else on the high seas. It's less helpful when we're supposed to be captivated by those same people being in danger. Meanwhile, the visual effects used in these sequences are perfectly acceptable (save for some clunky green-screen work) but they're not really anything to write home about.

On the other hand, the sound work in these set pieces is truly impressive. A pity that Greyhound is relegated to an Apple TV+ premiere. I'm sure Greyhound would have made excellent use of the sound equipment in a theatrical setting. Maybe the experience of hearing all of that in a big-screen environment would have mitigated the character-based issues Greyhound has? We can only speculate. What's more certain is that Greyhound is a perfectly cromulent war movie. Nothing truly groundbreaking here but it's Hanks doing solid acting and writing while big ships go boom. You could do far worse, particularly if you're just browsing around on the scant amount of programming offered by Apple TV+.
Posted by Douglas Laman (NerdInTheBasement) at 10:46 AM