Wings Is Soarin', Flyin',There's Not A Star In Heaven It Cannot Reach 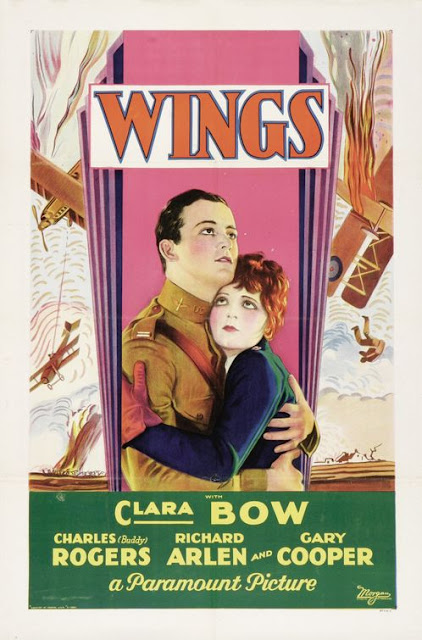 This past Sunday, The Shape of Water became the ninetieth motion picture to win the Best Picture Oscar. The expansive group of film that have won this award over the years include everything from a Lord of The Rings movie to a musical adaptation of Oliver Twist to John Ford's How Green Was My Valley. Surprisingly, amongst the ninety movies, only two of them are silent films. One of them, The Artist, came out relatively recently in 2011 while you'll have to all the way back to the very first Academy Award ceremony to find the only other silent movie awarded the Best Picture ceremony. Yes, the very first Best Picture winner, Wings, is the only other silent movie besides The Artist to win this highly pretigious war.

If the title Wings makes you think this project might have something to do with the process of flying, you'd be correct! Directed by William A. Wellman, Wings is about a pair of young American men who end up becoming fighter pilots in World War I while complicated romantic problems plague them. One of these two men is one of our lead characters, Jack Plowell (Charles Rogers), who enjoys working on his automobile while being oblivious to the romantic attractions his neighbor, Mary Preston (Clara Bow), the other main character of the movie, carries for him. Turns out Jack is actually madly in love with Sylvia Lewis (Jobyna Ralston), a woman who Jack doesn't seem to realize is actually romantically involved with David Armstrong (Richard Arlen).

Jack and David end up being the two young American men that get recruited into the world of airborne combat during World War I. At first, this story has a zippy comedic flair to it since it revolves primarily around training camp exercises and also the assortment of unknowingly conflicting romantic infatuations the lead characters share. This part of the story isn't all that innovative when it comes to either humor or characterization, but it does a fine job of establishing who our lead players are and where they're coming from. Leaving the best impression among the lead players is easily Mary Preston thanks to Clara Bow's phenomenal performance. This lady was born to be in silent movies thanks to the way she's able to make a single facial expression say so much, she's an absolute hoot to watch in her humorous moments while Bow is able to weave in humanity into her performance that also makes Mary Preston a human being you can't help but be dramatically invested in.

Once the film continues after a brief intermission, that's when Wings really (sorry for the obvious pun) soars. The prior character build-up pays off big time as the toll of this expansive war begins to be felt by the lead characters. A grim overtone begins to take over the proceedings with scenes that seem like they'll be inevitably happy taking a turn for the somber, most notably when Jack and Mary reunite overseas. Mary is delighted to see her old crush again, but Jack has consumed so much alcohol in an attempt to escape reality that he's too intoxicated to even recognize her. Not only does this scene allow Clara Bow to convey her characters disappointment in this turn of events in a devastating manner, but it also shows that Wings has set-up a world of optimism in the first half of its story that it intends to undercut in the second half of the story in an effort to show how tumultuous the first World War was to those who participated in it.

This storytelling intent becomes crystal clear in a climactic showdown with enemy forces that goes far darker in tone than I would have expected. Probing the idea that war makes us do regrettable things is far from a unique concept in war movies, but when executed with surprising levels of effectiveness like it is here in Wings, the lack of novelty can be more than forgiven, especially since this was a movie released just under a decade after World War I ended. Instead of delivering a movie that offers audiences a warm n' cozy vision of war to comfort viewers, Wings instead dives into how ordinary Americans were altered and haunted by their actions during this unprecedented worldwide conflict.

In order to explore the effect wartime actions have on everyday soldiers, Wings centers many sequences around airborne dogfights that hold up quite nicely in terms of visual effects considering they're nearly a century old. Though we get plenty of sequences of well-crafted airplane combat, Wings is focused first and foremost on the various plights of its lead characters which especially get the spotlight as the movie winds down. Though many of the character-driven moments here have been memorable, a final scene showing Mary and Jack reuniting under a nighttime sky ("Do you know what you can do when you see a shooting star?") that caps off Wings may be the best scene of the entire movie. It's a heavily moving sequence that offers some subtle form of inspiration in showing what kind of human connections can endure in times of seemingly unbearable hardship.
Posted by Douglas Laman (NerdInTheBasement) at 2:46 PM