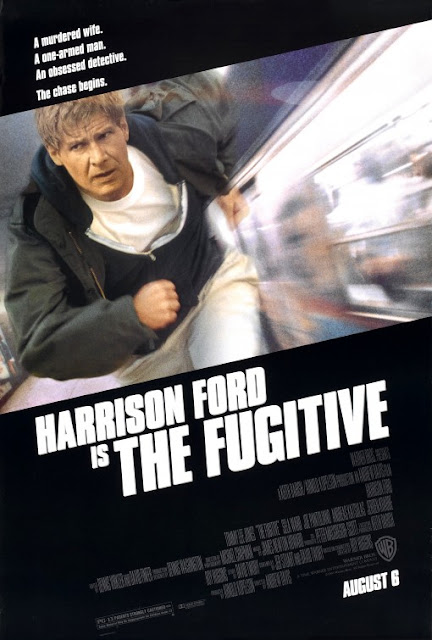 Dr. Richard Kimble (Harrison Ford) is having a lovely evening. He just had a wonderful time at a fundraiser, he performed his duties admirably during an impromptu surgery and now he's headed home to his loving wife Helen (Sela Ward). This evening takes a turn for the gruesome once Richard arrives home to find the corpse of his wife, whose been murdered by some unknown one-armed intruder. All of the evidence on hand points to Richard Kimble being the one who killed his wife, so he's incarcarated for his crime and sentenced to death row. While on a bus trip to prison though, a fatal car accident leaves the prison bus in shambles, giving Richard a chance to escape.


Now a fugitive, Dr. Richard Kimble has gotta take this chance to clear his name, all while being hunted by U.S. Marshal Samuel Gerard (Tommy Lee Jones), a determined man who won't stop until Kimble is apprehended. From there, a series of chase scenes play out depicting Kimble trying to avoid the law while trying to decode the mystery behind why he was framed for the murder of his wife. Very little of it is all that innovative or groundbreaking, but by contrast, the majority of The Fugitive is enjoyable action thriller filmmaking. Director Andrew Davis smartly keeps the premise of the picture simple in execution because sometimes, when you're cooking a meal, all you really need to make it tasty is basic ingredients.

At this point, it had been 16 years since Harrison Ford had starred in the original Star Wars trilogy and over a decade since he had started playing Indiana Jones, so this guy was already well-versed in playing lead roles in crowdpleaser fare. Ford knows just how to make Kimble the kind of relatable human being your average viewer can get behind and the sort of authentic everyman personality he emenates effortlessly makes it enjoyable to watch him get into and out of predicaments with ever escalating levels of absuridty. In short, Ford is the perfect fit for this lead role. Sure, he's not playing outside of his wheelhouse, but it's hard to care when it results in such an entertaining lead performance.

Backing Ford up is the performance that really put The Fugitive on the map, Tommy Lee Jones as a U.S. marshall looking in every nook and cranny for Kimble. Like how Ford was experienced in 1993 with playing the main characters in crowdpleaser fare, Tommy Lee Jones has made a career out of playing cantankerous individuals who have no time for the BS they've become embroiled in. There's a reason Jones is so in-demand for these type of parts, he's ever so fun portraying such people and that's on clear display with his great work in The Fugitive. David Twohy and Jeb Stuart's script hands Tommy Lee Jones a number of choice retorts and pieces of dialogue that the actor delivers in a highly enjoyable manner.

The same script that gives Harrison Ford and Tommy Lee Jones so many chances to inhabit the kind of roles they best excel in is far from a perfect beast, especially in regards to a few extraneous scenes (like when Jones leads a raid on another escaped convict) that feel clumsily integrated into the plot while it has to be said that the overall mystery of who's really behind framing Kimble for the murder of his wife ends up being easy to oslve due to the low amount of potential culprits on hand. Those are the sort of foibles in crucial plot elements of The Fugitive that keep this Andrew Davis directorial effort from being an all-timer, but it's still an enjoyable 90's thriller that gets a lot of mileage out of two strong performances.
Posted by Douglas Laman (NerdInTheBasement) at 11:25 AM