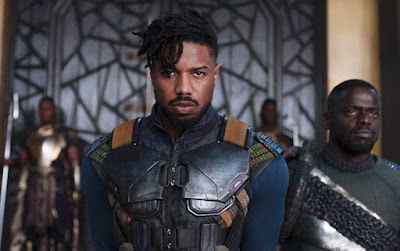 Another weekend, another impressive showcase of Black Panther's box office prowess. This time around, the King of Wakanda led the box office with $65.7 million, the third best third weekend in history (only Star Wars: The Force Awakens and Avatar fared better) and only dipping 41% from last weekend. The film has now grossed $501.1 million domestically, crossing the $500 million thresholds in just 17 days, making it the third fastest film ever to gross over $500 million domestically. The box office performance of this project is truly outstanding and it's guaranteed to now surpass the $623 million domestic box office total of The Avengers to become the biggest Marvel Cinematic Universe film of all-time.

The biggest of this weekend's two new wide release newcomers was Red Sparrow, which grossed $17 million. Given that this one wasn't based on well-known source material and the bleak nature of its marketing campaign, this isn't an awful sum, but on a $69 million budget, 20th Century Fox was obviously hoping for more from this title. This is the ninth biggest opening weekend ever for Jennifer Lawrence, only $15,000 behind the opening weekend for Joy. If it manages to beat out the opening weekend of Joy in the box office actuals, this will become her biggest ever opening weekend ever for a title that doesn't belong to either the X-Men or Hunger Games movies.

MGM came roaring back to life as a stand-alone distributor this weekend with Death Wish, which could only muster up $13 million. On a $30 million budget, this remake likely won't be a major financial loser for MGM but there was no doubt they were expecting more given the rampant marketing treatment they gave the movie. It seems the extended hiatus Bruce Willis took from wide release action movies did not build up demand for his return, perhaps because he's been busy doing a lot of direct-to-video action movies that satiated any potential audience demand for more Willis. This is the 26th biggest opening weekend ever for Bruce Willis, barely ahead of the $12.6 million bow of Disney's The Kid, and for MGM, it's about 7% below the $14 million opening weekend of their last pre-bankruptcy movie, Hot Tub Time Machine.

Entering its eleventh weekend of release, Jumanji: Welcome To The Jungle refuses to vanish as it dipped only 20% this weekend to gross another $4.5 million. This one's now the fourth biggest movie of 2017 domestically with $393.2 million and is all but guaranteed to outgross the $403.7 million haul of Spider-Man to become the biggest Sony/Columbia movie of all-time domestically. Meanwhile, Fifty Shades Freed dropped 53% for a $3.3 million fifth weekend, bringing its domestic total up to $95.5 million. Another Christmas 2017 title, The Greatest Showman, kept on chugging as it grossed another $2.6 million, a mere 21% dip from last weekend, giving it a $164.6 million domestic haul. Rounding out the top ten was Every Day, which dropped 49% and grossed an additional $1.5 million for a domestic total of only $5.2 million.

Next up was fellow Best Picture nominee Darkest Hour, which added $570,000 to an impressive domestic total that now stands at $55.4 million. Dipping only 3% this frame was I, Tonya, which meant this Tony Harding biopic grossed another $561,061 for a domestic total of $28.9 million. Lady Bird grossed another $532,204 to its domestic gross that now stands at $48.2 million. In its third weekend, Nostalgia expanded into 140 theaters and grossed only $40,626 for a dismal per-theater average of $290, bringing its domestic total up to only $84,861. Debuting in limited release was Foxtrot, which got off to an only OK start as it grossed $36,786 from 4 locations for a per-theater average of $9,197. No word yet on how the A24/DirectTV title The Vanishing of Sidney Hall did in this weekend as it premiered in 10 theaters.

The Top 12 movies this weekend grossed a total of $136.9 million, the fourth biggest gross ever for the ninth weekend of any given year. Though lacking a powerhouse newbie title like The Lorax or Logan that helped the biggest past ninth weekends soar, the fact that this was such a strong weekend can be attributed to a healthy marketplace where four other movies besides Black Panther managed to gross over $10 million this weekend. When multiple movies are thriving in addition to the juggernaut blockbuster, that's when real box office magic happens. 2018 has so far grossed $2.014.7 billion and, as far as I know, has set a record for the fastest year ever to get to $2 billion.
Posted by Douglas Laman (NerdInTheBasement) at 10:49 AM