Relying Solely On One-Note Gags Being Run Into The Ground Is A Bad Move For Game Over Man! 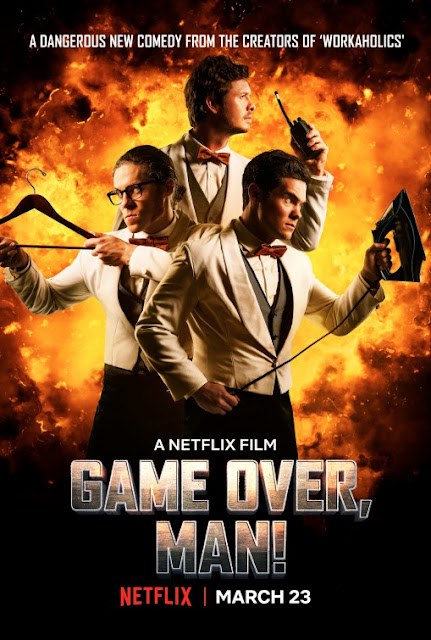 Workaholics is a television program that ran for seven seasons on Comedy Central, with it's run garnering high levels of critical acclaim. A large number of my friends adore the show and especially enjoyed the performances from the three lead actors on it. Having not seen the program myself, I can not offer my own two cents on Workaholics, I can only say that everyone I've spoken to that has seen it loves the show and its trio of leads. I bring up the positive reception garnered by Workaholics among my friends and colleagues because the new movie, entitled Game Over, Man!, it's three lead actors have starred in and wrote is absolutely awful and I always feel gross just writing wall-to-wall negativity. Making movies is a hard process, as is the process of landing any kind of acting work, so some notes of positive reception towards other pieces of art stemming from the people behind Game Over, Man! feels in order.


Anywho, the premise of Game Over, Man! is an extensive riff on Die Hard, a film that has been picked to the bone in terms of being parodied by comedic movies and TV shows (remember when The Cleveland Show did a whole parody of it? No? I'm the only one?). Game Over, Man! doesn't have much to offer in terms of new insight into parodying Die Hard, it just uses the basic plot outline of such a film (chiefly the idea of a normal person caught up in a hostage situation) for a series of gross-out gags and vulgar dialogue exchanges. The three leads who end up being the John McClane stand-in's are a trio of hotel workers, Alexxx (Adam DeVine), Joel (Blake Anderson) and Darren (Anders Holm).


These guys have dreams of going to bigger places in life, but as a group of friends, they have major issues to work out, namely Alexxx being overbearing while Joel and Darren are working on a secret project without Alexxx. All of this drama keeps you far from the edge of your seat as the film prattles on with a storyline that's more reminiscent of Paul Blart: Mall Cop 2 than Die Hard. There's lots to criticize here in Game Over, Man! but it's chief flaw is the kiss of death for any comedy; it's just not funny. Constant references to genitalia, extended utterances of profane swear words and a number of awkward celebrity cameos are serving as a substitute for actual humor here.

There's nothing wrong with embracing vulgarity in comedy, but acting like vulgarity itself is funny is a recipe for disaster. An on-screen penis isn't funny itself, it's what you do with it and how it relates to the characters or situation at hand is where you get humor, ditto for the F-bomb and cameos from Joel McHale and Donald Faison. Oh, and that can also be said for the act of constantly shouting things as Adam DeVine has a real problem as a comedic actor with just relying on screaming certain lines and thinking that in and of itself is funny. It's really not humorous though, it just makes DeVine's performance and character grating to watch.

Anders Holm and Blake Anderson aren't all that more enjoyable as characters and both, like DeVine, tend to go back to one quirk for humor that has steadily diminishing returns. Holm's character likes to vape and smoke a marijuana-like substance that DeVine's character grows, that's really it in terms of humorous things Darren does. As for Blake Anderson's character, well, his big joke is that he's a closeted homosexual and then (SPOILER ALERT, as if anyone cares) he comes out of the closet for the big climax where he turns to a mincing stereotype of a gay man that does not work in any way shape or form. If you like constant shrieking, the sight of partaking in drugs and gay panic jokes as a source of humor, the three leads of Game Over, Man! are your ticket to comedic bliss.

Otherwise though, you'll be like me and find Game Over, Man! to be intolerable before it's even halfway over. A finale that contains, in addition to Blake Anderson's cringe-inducing performance, a story element ripped off from Old Dogs (you know a movie is bad when it starts ripping off Old Dogs?) only cements how tedious the whole affair is. On top of all of that, director Kyle Newacheck doesn't lend the project any sort of style and identity behind the camera. Like the three lead actors, Newacheck has received more acclaim for other projects he's helmed, so hopefully I enjoy future movies that he directs. I can't imagine any of those prospective movies will be any worse than the monotonous attempts at comedy seen in Game Over, Man!, which somehow manages to become the poor man's Paul Blart: Mall Cop 2.
Posted by Douglas Laman (NerdInTheBasement) at 11:29 AM