Unsane Is Another High-Quality Thriller Effort From Director Steven Soderbergh (SPOILERS WITHIN!) 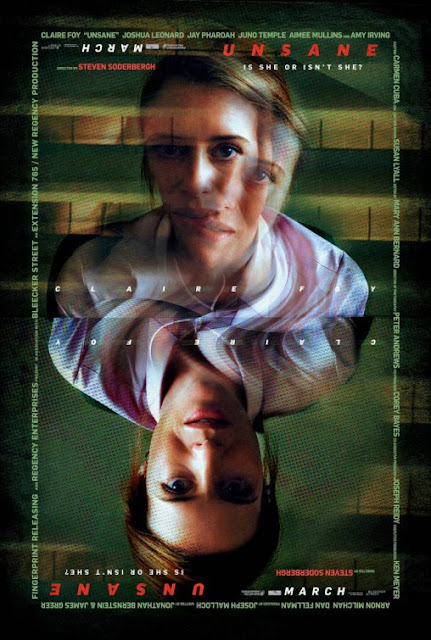 MASSIVE SPOILERS FOR UNSANE BELOW

While I mentioned in my review of The Informant! that a number of Steven Soderbergh's most famous movies revolve around comedic crime capers, for me personally, I think my favorite Soderbergh mode might be when he decides to go into the thriller genre. He's made a number of forays into this genre in this decade, specifically, Contagion in 2011, a terrific sweeping look at how a disease affects numerous different individuals and Side Effects in 2013, a twisty-turny thriller with great performances from Jude Law and Rooney Mara. The newest example of how good Steven Soderbergh is when he's working in the world of thrillers is the motion picture Unsane.


Unsane stars Claire Foy as Sawyer Valentini, whose trying to adjust to a new job in a new city, though constant interruptions in her life from a stalker are making that task impossible to complete. She decides to visit a therapist at a local hospital in order to help express her feelings and figure out a solution to her woes, but the moment the therapist visit is finished, she finds out that  seemingly "by the book" forms the counselor told her to sign have confined her to the psychiatric ward of this hospital for seven days. Sawyer immediately refuses to just stay here, fighting against the workers at this hospital and demanding she be set free.

From the moment this scenario is introduced, the script penned by Jonathan Bernstein and James Greer has a lot of twisted fun in depicting realistic ways that make you go "Ah, but of course" demonstrating why Sawyer is unable to immediately get herself out of this hospital, namely that her attempt to dial 911 and ask for help is responded to by an unfazed doctor asking Sawyer if she knows just how many patients try calling 911 to do just what she did every day. From these numerous fiendishly inventive demonstrations of how Sawyer cannot leave this hospital, a clear demonstration of the sort of narrative stratagems this story will constantly be pulling in this movie to keep the audience on their toes, the viewer is able to fully realize just what Sawyer is coming to terms with: she's trapped here.

Now both Sawyer and the viewer must begin to grapple with whether or not Sawyer is actually mentally unstable. You see, Sawyer is convinced that stalker of hers is working at this hospital and managed to take advantage of how the hospital is taking in perfectly healthy people as part of an insurance scam as a way to be with Sawyer again. Though fellow patient Nate Hoffman (Jay Pharoah, in an impressively naturalistic dramatic performance) assures Sawyer she doesn't belong here, both Sawyer and the viewer are unsure of just what kind of grasp she has on reality. Once again, we find Unsane being so thoroughly enjoyable as a thriller, this time deriving such enjoyment from mind-bending "What is real?" storytelling. The most memorable of her experiences with this part of her stay at this hospital comes when an improper dose of medicine sends Sawyer spiraling into a visually disturbing psychotic breakdown.

Unsane is already working like gangbusters just as a thriller set in a psychiatric ward about a woman trying to determine if she's gone off the deep end mentally or not, especially since Claire Foy is delivering astonishingly raw work in depicting Sawyer's most enraged acts of aggression against the hospital staff. Then the halfway point comes and the audience learns something...Sawyer isn't imagining things. Her stalker, a guy who always wanted to be her lover much to Sawyer's chagrin, really is working at the hospital for the sole purpose of being closer to Sawyer. This revelation, plus a flashback to Sawyer being told to reorient her entire life because of this stalker (with a "helpful" book being given to her entitled "Living In Fear"), suddenly recontextualized earlier scenes, most notably Sawyer being hit on by her boss, to reveal what Unsane really is: a thriller probing how women are frequently treated as lesser than by society, especially the male members of any society.

Sawyer's cries for help upon seeing her stalker working at this hospital being entirely dismissed by the hospital staff suddenly take on a whole new level of depth. Now such moments feel like echoes of real-life cases of women calling out abusive behavior in men being all too often ignored. Meanwhile, the stalker himself,  a guy named David played by Joshua Leonard, is a pitch-perfect depiction of the all-too-common type of dude who thinks the mere act of unloading affection onto a woman is enough to make her his object while he entirely disregards as an actual person who has feelings and thoughts of her own. A scene in the third act where Sawyer gets to confront David about how she's an imperfect human being rather than the perfect object in David's head is one of the best scenes in the entire film, especially since Claire Foy relishes delivering some choice lines of dialogue to David ("You could have found someone else David! People are really pathetic these days!"). This choice to orient the plot of Unsane on this specific real-life issue is brilliant and lends real substance to a thriller that was already delivering the goods simply in terms of unpredictable entertainment.

Now, we must briefly turn to the visual aspects of Unsane, because this is the rare film to be, like Sean Baker's 2015 classic Tangerine, shot entirely on an iPhone, specifically on the iPhone 7 Plus in a 1.56:1 aspect ratio, lending the film it's own unique visual aesthetic. Filming Unsane in this manner is an audacious task that I'm not sure works entirely. The filming method leaves some scenes with stripped down visual quality that's well-done while other scenes feel too unpolished visually without a clear thematic reason for them to look this unrefined. Still, kudos to Steven Soderbergh (who does the cinematography here under the pseudonym Peter Andrews) for swinging for the fences here and it's nice that filming on an iPhone hasn't found him abandoning his knack for strong shot compositions that was evident in his prior works. Plus, even the weakest parts of the camerawork don't distract from the thoroughly compelling Unsane, which starts out as a constantly clever thriller and then reveals itself to have as much substance in it's story as it has thrills.
Posted by Douglas Laman (NerdInTheBasement) at 10:54 AM