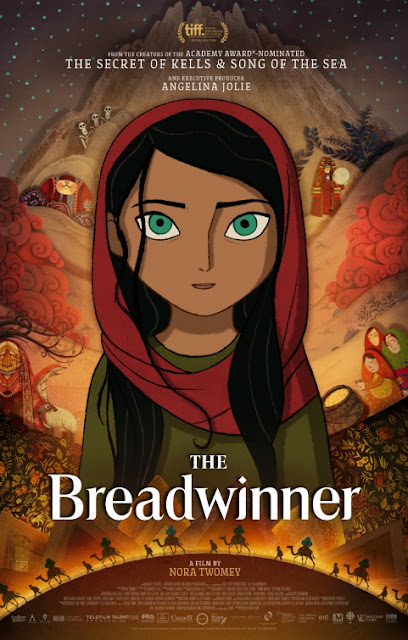 The importance of stories is the foundation on which The Breadwinner chooses to build itself and it proves to be to be quite the strong foundation. Hailing from Cartoon Saloon, the Ireland-based animation studio behind Oscar-nominated features like The Secret of Kells and Song of The Sea, The Breadwinner begins by establishing the relationship between father Nurullah (Ali Badshah) and his young daughter Parvana (Saara Chaudry). While selling items in a local marketplace to make a living for their family, Nurullah attempts to educate his daughter, frequently through the method of telling her stories. Neither the attempts at education or him telling her these stories interest Parvana all that much.

Nurullah trying to teach his daughter earns him the wrath of a local member of the Taliban who proceeds to arrest him. Parvana and the rest of her family, consisting of her mother, older sister and baby brother, are now in a state of crisis that's further compounded when their mother is brutally beaten when she attempts to travel outside to protest her husband's arrest without the accompaniment of a man. As a way to help her family, Parvana begins to disguise herself as a boy named Aatish and uses this ruse as a way to purchase food and generate money for her family. She also hopes to use this new identity to help free her father from his unjust prison sentence.

If modern American animation, especially animated features made in the first few years after Shrek debuted, is typically chock full of cynicism and wry pop culture references, The Breadwinner opts to tell a tale more reliant on timelessness, one that, though it's actually adapted from a 2000 children's book by Deborah Ellis, in broad narrative strokes feels like it could have originated from an ancient fable. That's to The Breadwinner's benefit since it means that its story and tone feel like they're being executed in a way that actually serves the characters and plot at hand rather than being at the mercy of toyetic elements or gratingly manic attempts at broad comedy.

Adhering to a more traditional type of storytelling doesn't mean The Breadwinner coats it's tale in treacle or overly one-dimensional characters though. On the contrary, maybe one of the most rewarding aspects of the story is how complex the characters turn out to be. Even an antagonistic character that torments Parvana throughout the story ends up showing some unexpected vulnerability in the face of the prospect of going to war that adds layers to this seemingly simple character. Nearly everyone in the cats of The Breadwinner has got some kind of extra dimension to them that ends up filling up the story with plenty of emotionally engaging depth.

The events of The Breadwinner are told through hand-drawn animation, with sequences depicting the events of a story that Parvana imparts onto other characters being rendered in a form of animation evoking ancient puppetry. Though occasional CGI elements, namely automobiles, don't gel properly against their traditionally animated surroundings, the animation of The Breadwinner is otherwise terrific. Character designs are especially well-realized, especially in how there's a stylized nature to certain characters that take advantage of the more heightened visual opportunities offered up by animation as an artform, but they aren't too stylized to the point that they might detract from the realistic atmosphere of the project.

Those various characters also tend to express subtle but important details in their movements or posture that show a strong attention to detail on the part of the animators. Director Nora Twomey puts all of this sublime animation to great use on a story that soars on, among other elements, it's elegant simplicity. Streamlining the story of The Breadwinner so that our focus is just on Parvana and her family helps one become wrapped up in their plight, which makes a third act that pushes both Paravana and her mother to the limit in individual scenarios especially harrowing to watch. Such engaging cinema tends to emerge when your story is working well because, as Parvana knows all too well, stories are extremely important.
Posted by Douglas Laman (NerdInTheBasement) at 11:36 AM