Ready Player One Is, For Better And For Worse, A Traditional Action Blockbuster 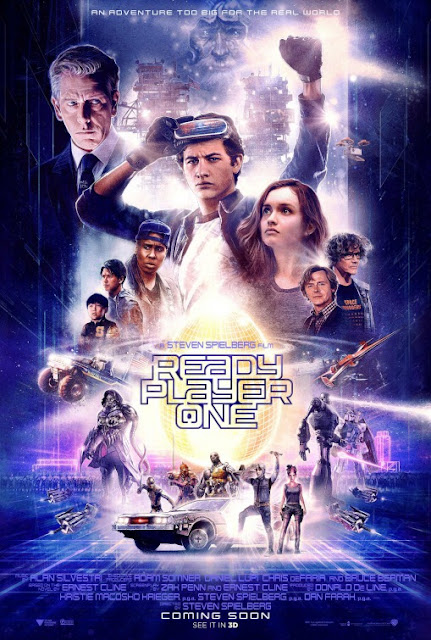 After a whole decade of being absent from the realm of American blockbuster cinema, director Steven Spielberg returns to the genre he helped bring into existence with Ready Player One, an adaptation of a 2011 novel penned by Ernest Cline. Given just what a tremendous track record Spielberg has with blockbuster fare (I'd personally say his only two real misses in that subgenre would be Temple of Doom and The Lost World), the idea of him returning to rollicking escapism science-fiction blockbusters sounds like a winning prospect, though the excerpts I've read from the Ready Player One book (which, for full context, I've never read in full) did make the source material he was adapting seem more creepy than exciting, thus diluting my excitement for this newest Spielberg fetaure immensely.


With all of these factors weighing on the project, how is the actual film then? Well, it's one of Spielberg's weakest forays into blockbuster territory for sure, but it's overall a pretty enjoyable adventure, one whose greatest strengths (as well as a number of weaknesses) emerge from a more traditional approach to storytelling. Akin to Ava DuVernay's A Wrinkle In Time from earlier this month being a straightforward fantasy tale of self-empowerment, Steven Spielberg uses the virtual reality world of Ready Player One to tell an old-timey adventure story espousing the virtues of friendship and just having fun so sincere and non-cynical that it's a shocker that no character ever utters "Gee whillickers!".

Adhering to more old-fashioned storytelling tendencies means we have a classical hero protagonist to lead our story in the form of Wade Watts (Tye Sheridan), an orphaned 18-year-old who lives in Colombus, Ohio in 2045. The world has gone to Hell in Ready Player One, everything's so distraught in this vision of future-Earth that people are always escaping into the virtual reality world of the OASIS. A world where you can be anyone and do anything is much more interesting than being stuck in a crumbling reality. In the OASIS are a series of three challenges concocted by the creator of the OASIS, James Halliday (Mark Rylance), prior to his death. Those who are able to complete all the challenges gain half a Trillion dollars and complete control of the OASIS.

Wade and his pal Aech (Lena Waithe) are looking to complete all of the challenges, as is the evil corporation Innovative Online Industries, especially it's CEO Nolan Sorrento (Ben Mendelsohn). With the help of his friends, including his crush Art3mis (Olivia Cooke), Wade is determined to win this competition first no matter what. This is where the treasure hunt narrative comes into play and allows Ready Player One to have a reasonably non-convoluted plot for its characters to inhabit. From the get-go, the stakes are clear, the good guys and the bad guys are overtly defined, all the information you need is upfront and center and that allows the story to move at a pleasingly steady pace.

Of course, the story itself does kick off with a clunky opening sequence that has Tye Sheridan dumping loads of voice-over exposition on the viewer for plot elements that could have easily been conveyed in a visual manner. Thankfully, Ready Player One certainly adheres far more frequently to visual-oriented storytelling from then on, though this opening scene, as well as subsequent early sequences, do establish that Wade Watts isn't a thoroughly fascinating lead character. Just as Ready Player One's straightforward narrative sensibilities serve it well in keeping its storyline free of extraneous subplots, such a prominent element in the overall movie also leaves a number of key characters feeling undercooked.

Tye Sheridan has a number of interesting elements in his performance, but he's not able to infuse his performance with enough distinctive traits to make Wade Watts feel like he's more than just a basic archetype. Similarly, Art3mis, despite a lively performance from Olivia Cooke, is just around to be a conventional love interest role and doesn't get all that much to do on her own. By contrast, Lena Waithe, Mark Rylance and Ben Mendelsohn are a lot of fun in their individual roles because their performances allow them each to add a notable amount of distinct personality to their parts. Wade and Art3mis aren't bad characters, they're serviceable ones, but if only the talented actors playing them or the two screenwriters could have sprinkled in more unique characteristics into these too often stodgy characters.

Hewing so close to traditional storytelling serves Ready Player One well in a number of respects, but as one can see, it also hinders it too. The same can be said for a number of tidy old-timey morals about balancing technology with reality, as well as some underdeveloped themes, that feel like they don't gel with the rest of the movie. On the other hand, a pivotal emotional sequence in the climax works excellently and one of the most important aspects of the feature ends up being perhaps its best element: the spectacle sequences. The assorted large-scale segments set in the OASIS depicting car chases, battles and all sorts of other activities are wonderfully realized, especially in how Steven Spielberg's use those tracking shots he loves so much to allow the viewer to every detail of these virtual reality challenges.

Needless to say, Ready Player One's extravagant action sequences are a whole lot of fun, especially that guns-a-blazing climax that keeps on escalating in absurd mayhem. On a similarly positive note, kudos to the animation department on this project for making the CGI OASIS avatars of the various main characters look exceptionally well-done. Sequences set in the OASIS are entirely populated by CGI characters voiced by live-action actors and such digital creations are some of the better CGI characters I've seen in a while that smartly avoid the uncanny valley effect by making these CGI characters heavily stylized in design. When you've got a virtual reality world at your disposal, why not go nuts with some stylized visual choices? That's the kind of creative sensibility, paired up with a refreshingly traditional approach to blockbuster storytelling, that makes Ready Player One a highly enjoyable outing, even if it very much lacks the thoughtful substance that the best Steven Spielberg blockbusters have in spades.
Posted by Douglas Laman (NerdInTheBasement) at 1:41 PM