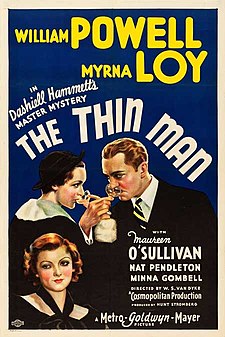 
On a far more upbeat note, at least the original Thin Man movie is a total delight, a classic mystery film with two dynamic lead characters that provide a type of rapport thoroughly unique for this genre. The protagonist of this piece is Nick Charles (William Powell), a retired detective who is looking to live out a quiet life with his wife, Nora Charles (Myrna Loy) and their adorable doggo Asta (Skippy). However, the abrupt disappearance of Clyde Wynant (Edward Ellis) leads Clyde's daughter, Dorothy (Maureen O'Sullivan), to seek out the assistance of Nick Charles, a friend of her father's, to help solve the mystery of her dad has suddenly vanished.

Nick Charles, despite Nora's excitement at the prospect of him returning to the detective game, has no interest in taking up a new case. However, no matter how hard he tries, he just can't seem to avoid getting embroiled in the whole Clyde Wynant affair. Eventually, he has no choice but to become involved in this case and try to get to the bottom of what exactly is behind Clyde Wynant's disappearance. This mystery involves the requisite twists and turns you'd find in any such caper, but despite the presence of a missing man and a number of murders eventually factoring into the plot, there's a lightness to The Thin Man derived from the dynamic between the two lead characters that proves to be totally enveloping.

Conventionally, romantic leads in American movies are strangers who grow to love one another over the course of a story, but here, Nick and Nora haven't just met each other, they've been married for an extensive period of time. This means they have a husband/wife dynamic that's truly unique, one that places the two on equal footing in their marriage and one that has them engaging in an amusingly candor verbiage. Instead of constantly being a damsel-in-distress for Nick to save, Nora is the one encouraging Nick to return to his detective practices and insists on accompanying him on his clue-hunting missions. Not only is this dynamic enjoyably different, but it also provides a whole bunch of fun thanks to the performances of the actors partaking in said dynamic.

William Powell and Myrna Loy are exceptionally fun together, with Loy especially being a hoot in her line deliveries (I still giggle remembering how she says a line dictating how she wants a waiter to line up an assortment of alcohol for her). The Thin Man doesn't just excel when it comes to the interactions between the two leads but it is here in the performances and writing used to bring Nick and Nora Charles to life that some truly exemplary ingenuity is found. Similarly memorable performances can be found in the supporting cast, with Maureen O'Sullivan and William Henry's delightfully geeky turn as young intellectual Gilbert Wynant being especially choice.

Even with all that praise, it must be said that the eventual conclusion to the mystery, revealed at a big dinner Nick Charles throws, does feel like it's rushed through. That seems quasi-intentional given how much Nick is amusingly flying by the seat of his pants in this sequence but I couldn't help but wish the all-important resolution to this mystery had some more pizzazz and organic build-up to it. Otherwise though, it's no mystery why The Thin Man ends up being so much fun, director W.S. Van Dyke clearly has a skilled hand at creating engaging mysteries with a light touch. Any film that manages to have the kind of engrossing rapport William Powell and Myrna Loy share here as well as smartly incorporate the recurring presence of a cute doggie is considered a win in my book!
Posted by Douglas Laman (NerdInTheBasement) at 11:00 AM