In Laman's Terms: Why was the 94th Academy Awards such a calamity? 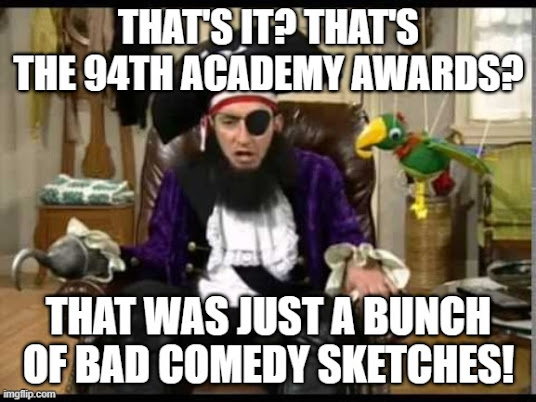 We're not talking about "that slap" here.

Yes, it's all anyone's talking about, but that's why I'm not bringing it up yet again here. What would be the point? Plus, as a white person, I have no business dropping a "hot take" on a public altercation between two Black people.

As for the rest of the ceremony, though? Oh boy.

The 94th Academy Awards seem to have been cursed from the get-go. The decision to shuffle off eight categories to before the proper live ceremony already put a bad taste in people's mouths. But oh, if only we knew what the actual ceremony would deliver. For starters, lots of bad jokes mocking movies. If there's ever a place for that, it's the Academy Awards, a ceremony, in an ideal world, dedicated to loving this artform. Nobody's saying some good ribbing should be off-limits, but Amy Schumer making an unoriginal gag about how "The Power of the Dog is so loooong" (ironically, that Jane Campion meditation on how cycles of toxic masculinity are perpetuated has the exact same runtime as Schumer's Trainwreck) or nobody seeing The Last Duel just rang hollow and mean-spirited.

Why can't the Oscars show affection for movies? Why are they so self-conscious? Justin Chang just wrote a great Los Angeles Times piece about how baffling it is to see Academy Award voters recognizing an eclectic group of motion pictures that include Drive My Car yet producers of the same show keep doing everything to undercut recognizing those same films. That sentiment ran through my head all throughout the night. Ryusuke Hamaguchi got rudely hurried off-stage during his acceptance speech for Best International Film, but don't worry, there was still time for BTS to show up and shill for Disney movies.

But the inexplicable parts of the night were what really proved to be the unforgettably miscalculated aspects of the whole ceremony. Pushing all those technical awards to before the show, much to the derision of everyone in Hollywood, was supposed to guarantee this event wouldn't run long. However, the 94th Academy Awards still ran well over 30 minutes over its three-hour runtime. Meanwhile, the video montages to both James Bond and The Godfather may have had their hearts in the right places, but they ended up coming up short, especially the latter presentation. The Godfather was a subversion of consequence-free fantasies of gangster life, not an indulgence of it like this montage suggested!

Then there was the fact that only half the Encanto cast could come out to perform "We Don't Talk About Bruno"? Much love to Megan Thee Stallion, but I was excited to see what the performers of the shape-shifting and super-hearing Madrigal family members looked like! Worst of all, though, was an initially promising decision to have a big choir come out and performer a tune for the In Memoriam segment. What started as a welcome departure from the norm because a baffling exercise once the tunes got upbeat and jovial. Plus, singling out a handful of deceased celebrities to get special tributes sounded nice on paper, but just seemed to elevate individuals like Betty White and Sidney Poiter as "important" against everyone else.

Are the Academy producers so desperate to cram entertainment into every second of this show that even the In Memoriam segment isn't off-limits? Miscalculation seemed to be the name of the game here for the 94th Academy Awards as one comedic segment after another kept misfiring. It all seems to stem from one issue: the Academy Awards want to be loved. Really really loved. In the process, they're just alienating everyone. Bilge Ebiri wrote a great Vulture piece last month talking about how "self-loathing will kill the Oscars" and he's right, including on how the supposed "ratings woes" of the ceremony are not that bad.

All live TV shows are down in ratings, this is just the name of the game in 2022. We're never going back to 2008 and that's OK. Stop sabotaging the show to make it 2008 again. It's not working for anyone. Viewers who previously never had an interest in the Oscars aren't tuning in by the droves to check out this clustercuss and movie lovers (who were supposed to be united by this event) are rightfully treating this ceremony as the mess it was. When we can't even count on competent camerawork for an Academy Awards ceremony, what're we even doing here?

There's value in the Academy Awards. They can help shed a light on little-seen movies, such as Drive My Car, which more than doubled its domestic box office haul once it scored a quartet of Oscar nods. A montage from the 90th Academy Awards ceremony is something I return to every month or so to feel good and cry over the magic of this medium. Plus, having spent the last two Oscars watching them with a bunch of other people, it's wonderful to watch the spectacle with a bunch of other passionate people. The Oscars, like movies themselves, have the ability to bond people. If only they were confident in that gift instead of constantly scrambling to be "entertaining" or "appealing" or promoting Disney properties.

This years Academy Awards was a calamity. The producers of this show have been open for some time about the need to tweak this ceremony, and that's true, just not in the way they think. Rather than kick categories to the curb or eat up time with pointless comic sketches, it's time for the Oscars to look inward and start prioritizing movies and the artists that make them.