Morbius makes Howard the Duck look like Spider-Man: into the Spider-Verse 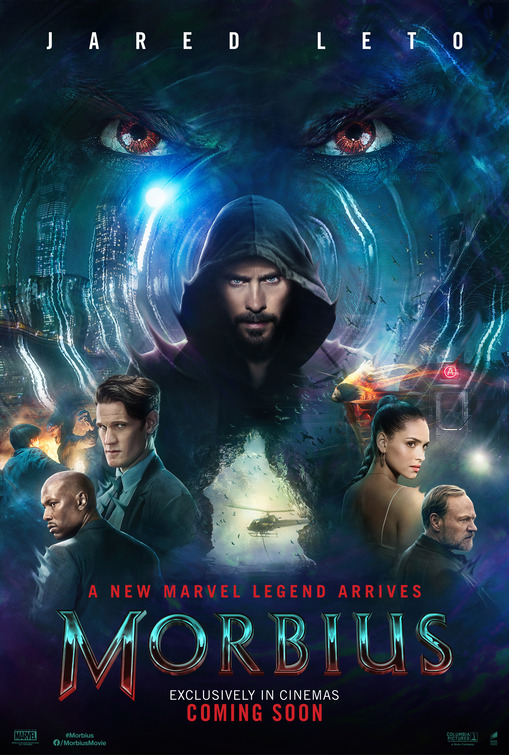 At one point in Morbius, the audience is treated to the sight of a cargo ship named after famed director F.W. Murnau, the man responsible for, among other works, the original Nosferatu. Referencing a cinematic legend like that, complete with Jared Leto vocalizing the name of the ship a little while later, had me wanting to blurt out in the theater "Keep his name out of your mouth!"  Observing the existence of this silent cinema master is the closest Morbius gets to something resembling good filmmaking. Murnau got more power out of a dude chasing a piglet than Morbius does with a $75 million budget and modern visual effects tools at its disposal.

Dr. Michael Morbius (Jared Leto) was born with a life-threatening condition that has, among other symptoms, impaired his ability to walk. Desperate for a cure, he goes to the extreme measure of experimenting on bats. During this unpredictable process, he spurs the creation of a serum that manages to cure his ailment, but at a cost. This procedure also turns Morbius into…something inhuman. Something that fascinates his life-long wealthy and sickly buddy Milo (Matt Smith). And something that needs to consume blood to survive. He’s a vampire folks, that's what I'm trying to say. Everyone better hang on tight (spider monkey), we're about to get the most tedious hetero vampires this side of Transylmania.

Towards the end of Morbius, the titular character shares dinner with his love interest, Dr. Martine Bancroft (Adria Arjona). This interaction that results in him revealing that he can go out into sunlight without suffering any harm. “I’m not that kind of vampire,” he remarks. Of course he’s not. That’s a classic fun vampire. Morbius doesn’t really act like a vampire. He doesn’t live in a castle, sleep in a coffin, transform into a bat, or any of the entertaining things you’d want to see a vampire do. Heck, this world's version of vampire's can even see their own reflection! It’s like doing a werewolf movie where the werewolf just scampers across the backyard.

It isn’t just on delivering vampire mayhem that Morbius comes off as lazy. The film resembles an old-school B-movie more than anything else with a plot that takes place across a handful of sparely-decorated sets and an equally minuscule amount of cast members. Countless scenes, like a chase sequence where Morbius is first on the run from the cops, just grind to a random halt. There’s no rhyme or reason for why they end like they do. It’s like the writers couldn’t figure out a proper ending for these moments or just got really bored. Some movies flourish under financial restrictions. In Morbius, it seems a smaller budget for a superhero movie just exacerbated the stagnant creativity baked into the writing and directing.

Even worse, the whole production is anchored by one of the worst performances of Jared Leto’s career. Morbius is portrayed by an actor more famous for making headlines than genuinely good performances. However, some titles, like House of Gucci, have served as an undeniable good vehicle for his wacky talents. Put him in something silly and Leto's maximalist tendencies can reap something enjoyable. Strangely, playing a vampire superhero has informed one of Leto’s most muted performances. The guy portrays Dr. Michael Morbius like he’s just been awakened from a midday slumber even after he gains superhuman strength and agility. Whoever he’s interacting with, Leto fails to drum up even a flicker of chemistry. Leto’s been bad in other films, but rarely has he been this forgettable. He seems so bored with everything and the feeling becomes contagious.

Way too much of Morbius focuses on this sleep-inducing performance. Action scenes are few and far between, with what skirmishes that do emerge getting realized through frantic camerawork and unconvincing CGI stunt doubles. These duels are also set drab backdrops like the grey interior of a cargo ship and a pitch-black underground section of the Big Apple. Subplots, including one about two cops (played by Tyrese Gibson and Al Madrigal) tracking down someone whose sucking the blood of people in New York City, are similarly devoid of personality. The only thing worse is the attempts at comedy. All of the laugh lines were met with total silence by the crowd I saw Morbius with. The giddy audience excitement that usually greets comic book movies was absent here. You could hear a pin drop in my IMAX auditorium.

Rather than walking out of the theater quoting your favorite funny lines or excitedly recounting cool action beats, you'll exit Morbius in a quiet daze, the sheer creativity emptiness of this enterprise leaving nothing to talk about. It's all hollow, this isn't even a fun disaster to pick apart, it's just lifeless. The only thing running through your mind afterwards will be understandable questions about certain shortcomings. Why is Jared Harris here for a disposable supporting role that spans three scenes, tops? How come director Daniel Espinosa is committed to capturing everything with so little excitement or flair? Why in God's name does Morbius have such a perverse fascination with watching women of color scream and suffer? Also, does this film possibly deliver the worst comic book movie credit scenes of all-time? At least the second one of those elicited an unintentional cackle from me, the first time Morbius inspired any kind of emotion from my body.

What you've heard from other critics is true. Morbius does share several hallmarks with comic book movies circa. 2005. But even that feels like an insult to those earliest entries in this subgenre. Morbius would never have the confidence or fun of setting a training scene to an Evanescence song. The liveliest parts of Nicolas Cage’s Ghost Rider performance do circles around Jared Leto’s lifeless Morbius performance. Even those dreadful Fantastic Four movies didn’t feature such an embarrassment of embracing fun parts of vampire lore. You could do better than Morbius for superhero movie fare in 2006. In 2021, with a wealth of quality cinema starring spandex-clad characters at your fingertips, there’s no excuse to give the disastrous Morbius a watch.