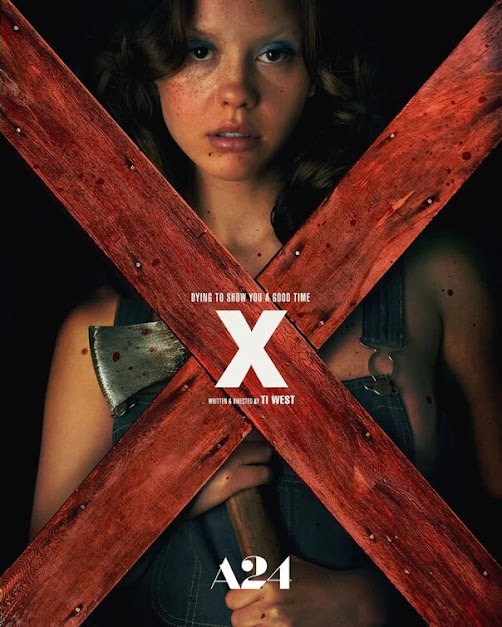 Thanks to the sleeper hit The VVitch, A24 has turned to horror movies as a go-to vehicle for commercial cinema that can crossover into mainstream success. Many of these films have not only been good, but they've also been slow-burn titles with minimal dialogue and storylines that run on ambiguity. Ti West's new horror film X also hails from this studio and it's certainly got bold filmmaking and heftier ideas running through its veins. However, by its very nature of adhering to the mold of a 1970s/1980s slasher movie, it's also a more in tune with crowdpleaser elements. There's plenty of nudity, comical lines, and near-death experiences to keep people satisfied until the blood starts flowing. If your main complain with prior A24 horror movies was that they didn't have enough going on, well, X should keep you satisfied.

Maxine Minx (Mia Goth) is traveling through Houston, Texas with boyfriend Wayne Gilroy (Martin Henderson) and four other people, including other actors and a pair of technicians, to shoot a porno that they're all convinced will send them to the stars. Minx is especially enamored with the idea of achieving stardom, a status she feels she's destined for. To shoot this lewd picture, Gilroy has secured the a farmhouse belonging to an elderly couple, Pearl (Mia Goth in a second role) and Howard (Stephen Ure), who're initially unaware of the naughty action taking place just behind their back. As shooting commences, peculiar happenings begin to stack up around Minx and company. Their elderly hosts may be dealing with something extra that could have gruesome consequences for this film crew.

The most welcome surprise of X is that it likes its characters. I've never disliked slasher films per se, but they've always felt like a strange genre to me, one where humans can often end up being just bowling pins that a masked killer knocks down like a bowling ball. It can be fun, but since the characters aren't treat as much beyond walking corpses, they can be hard to engage with. X, meanwhile, gives you some enjoyable and larger-than-life personalities to chew on. We're all aware most, if not all, of these people will end up dead long before the credits roll, but West isn't treating that as an excuse to churn out run-of-the-mill fictional people. Varying perspectives, demeanors, and even approaches to cinema manifest across the primary cast, making them much more than just the bowling pins that populate other slasher fare.

Even the antagonistic elderly couple that are initially mocked by the younger characters for looking exceedingly ugly are presented with more than a touch of empathy. Pearl, in particular, gets a lot of screentime to have her perspective fleshed out, with a yearning for intimacy and affection becoming key in her sequences. Even once people start getting knives jabbed into throats and shotguns are blasting all over the place, West makes time for quiet moments of interaction between the older duo that've helped set the plot into motion. Having the screenplay be as fascinated with quiet conversations as it is with bloody carnage is a great move all around.

If there's a chief complaint to be had with X, it's also something that proves charming about the feature: this is very much a classic slasher movie. Ti West has not set out to make something that deviates from the norms of this genre, he's just made a more polished and thoughtful version of what you'd expect. That has its own pleasures, but the gestures at weightier themes did make me wish that some parts of the film strayed a bit farther from slasher movie norms. It also has to be said that this adherence to the familiar does make X less scary than it could be. We're not here for terrifying uncertainty, but rather here for West to deliver a tasty version of a dish we've gobbled up before.

That quibble isn't fatal, though, and X proves a fun watch more often than not. A gaggle of committed performances from the assembled actors help quite a bit with that, especially Martin Henderson's swaggering Southern producers. This dude's just diving in headfirst into being just Matthew McConaughey if he became a porn producer and I'm here for it. The use of unorthodox editing to cut between disparate locations, serving as an extension of one character referencing the editing techniques of the French New Wave, also proves a both an enjoyable visual motif and a creative way to differentiate X from other slasher films.

X may not be a game-changer for slasher fare, but when an entry in this genre is told with this much flair and is this fun, it's hard to complain. Plus, great use of the "Don't Fear the Reaper" song, that counts for a lot in my book.