Deep Water is too shallow for its own good 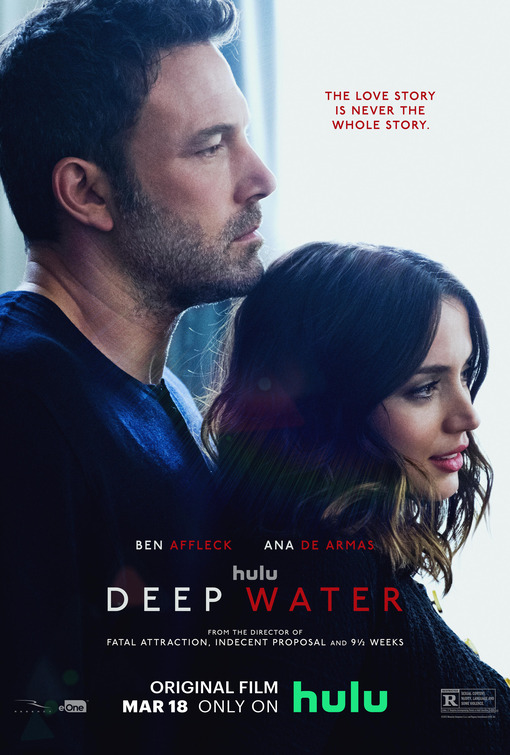 Vic (Ben Affleck) and Melinda Van Allen (Ana de Armas) are a married couple with a far from perfect marriage. Even the smallest of discussions between the two are riddled with animosity and Melinda has a passion for engaging in physical intimacy with other younger men. Initially, it seems like the conflict here will be restricted to just barbs between spouses, but it turns out, Melinda's flings keep winding up dead. Neighbors and other residents around town begin to whisper about Vic maybe being responsible for these slayings. With tension only growing between the Van Allen's and the body count rising, secrets are about to come bubbling to the surface.

The most fatal flaw with the screenplay for Deep Water by Zach Helm and Sam Levinson is how it tries to be both a steamy thriller and a contemplative domestic drama about a marriage slowly falling apart. It's perfectly reasonable to imagine a movie that combines the aura of Basic Instinct with a married couple straight out of Who's Afraid of Virginia Woolf? Unfortunately, this is not that movie. The two disparate pieces don't quite work right together, mainly because Helm and Levinson make the critical error of believing that downplaying everything will automatically give it depth. Gloomy faces do not equal substance, though, and that lack of depth renders Deep Water scenes relying on the tense dynamic between Vic and Melinda inert.

Too much of the runtime in Deep Water is just spent spinning its wheels rather than finding its way to channeling its intended vibes of Paul Verhoeven and Douglas Sirk. However, there are still worthy elements here. Ana de Armas, for one, is having a ball in her lead performance, especially in the first act of Deep Water where her character's at her most chaotic. She purrs, she screams, she drunkenly sings, she slinks around on a staircase, I half-expected her to also reveal that she can fly in a twist ending. She's got the sort of gung-ho vibes and over-the-top sensibilities that more of Deep Water could've taken a cue from.

Lyne, cinematographer Eigil Bryld, and editors Tim Squyres & Andrew Mondshein also incorporate a handful of fun visual details into Deep Water that deserve praise, even if their choice to coat most of the movie in a hideous light blue tinge is abhorrent enough to make me want to give the whole movies imagery an F. Immersive camerawork used to realize a car bouncing along a woodland path is quite an exciting touch, as are the cuts used to Melinda's extramarital affairs whenever Vic is out biking. Props also to Tracy Letts, for absolutely crushing his line deliveries in the last thirty minutes of Deep Water, his way of declaring one character is going to jail is especially outstanding.

Deep Water has its share of standout elements, but unfortunately, they're not enough the norm within the film's two-hour runtime. Deep Water is rarely terrible, but it's also so trapped between weighty and steamy aspirations that it's doubtful it'll satisfy most who tune in. The erotic thriller's absence from mainstream American cinema has been a significant detriment to the world of film, we desperately need to see more motion pictures with the scope and ambitions of Deep Water. However, future attempts to revive this genre would be well-advised to opt for more cohesion or even just fun than this particular Adrian Lyne movie.