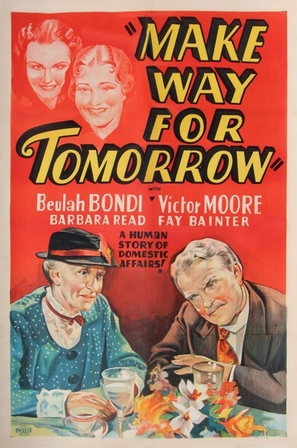 Movies fall through the cracks of history for different reasons. Some wind up obscure because of mixed reception from audiences and critics. Other falls by the wayside due to bad marketing. In the case of 1937 feature Make Way for Tomorrow, I'd propose it's because director Leo McCarey was too good of a filmmaker that yea. That's no hollow praise masquerading as analysis. McCarey won the Best Director Oscar for The Awful Truth that same year, with that same film becoming a box office hit and helping to launch Cary Grant to stardom. There were a lot of positive ripple effects from The Awful Truth, but it did overshadow Make Way for Tomorrow, which carried a tone so grim that it was going to need all the help it could get to not be dismissed by the public at large.

Such a somber aesthetic is used for the story of Barkley "Bark" (Victor Moore) and Lucy Cooper (Beulah Bondi), who have just lost their home. The duo are now in need of somewhere to rest their bodies and their adult children offer to take them in. However, none of them have enough room for two extra people, so Lucy goes to live with George (Thomas Mitchell) and his family while Bark hunkers down with Cora (Elisabeth Risdon). The living situations at both establishments becomes hostile quite quickly, with Lucy often being perceived as "intrusive" on the household while Bark catches a cold that requires a lot of attention.

From there, things only go from bad to worse. Viña Delmar's screenplay, adapted from a Josephine Lawrence novel as well as a play, holds back no punches in examining the domestic strife that occurs once these elderly parents are forced to become a part of their kids lives again. While we always have sympathy for protagonists Bark and Lucy, it is easy to see the points-of-view of the frustrated folks thanks to the nuanced screenwriting of Delmar. Anita (Fay Bainter), George's wife, for instance, doesn't get fed up with Lucy because she's innately wicked. Instead, her grievances come about when Lucy begins to interfere with the work she does from home as well as when she perceives her teenage daughters to be in danger.

Even with this level of intricacy woven into most of the characters, the focus here remains on the elderly Cooper couple, with tragedy seeping into every frame chronicling their current condition. Society often views the elderly as something to be dismissed, shoved under the rug, a norm reflected throughout Make Way for Tomorrow right down to its title. That makes the various scenes just showing Bark and Lucy as everyday human beings, such as quiet interactions between the former character and local shop owner Max Rubens (Maurice Moscovitch), all the more emotionally potent. This is a feature-length exercise in reaffirming the humanity of people often seen as no longer having any.

This becomes especially noticeable in the final half-hour of the film, which oscillates beautifully between wistful melancholy and then quiet despair. The former tone gets reflected in Bark and Lucy popping into a hotel they stayed at on their honeymoon decades earlier. It's a rare moment of unbridled joy for these two in Make Way for Tomorrow as they stroll down memory lane, sip fancy drinks, and process how the decades have slipped through their fingers. After all this time, there's still such endearing affection between these two that's lovingly represented by Moore and Bondi's great performances. Just look at the authentic depiction of Bark giggling over Lucy getting tipsy. The acting between these two aches with years of experience right down to the tiniest details.

Once we're away from the hotel, it's time for Bark to board a train to California while Lucy stays behind. The distance between these two will now be greater than ever before and the financial uncertainty lingering over this whole story (which was told during the Great Depression) makes it impossible to ignore the notion that they may never see each other again. All the quiet characters moment and realistic behavior in Make Way for Tomorrow has built up to this moment beautifully. The bittersweet good-bye here is a massive departure in tone from typical American movies of this era, there's nary a happy ending in sight. But that's just the perfect way to cap off this story, with this masterful conclusion along making the perfect case that Make Way for Tomorrow should be much more widely talked about.

Posted by Douglas Laman (NerdInTheBasement) at 11:14 AM