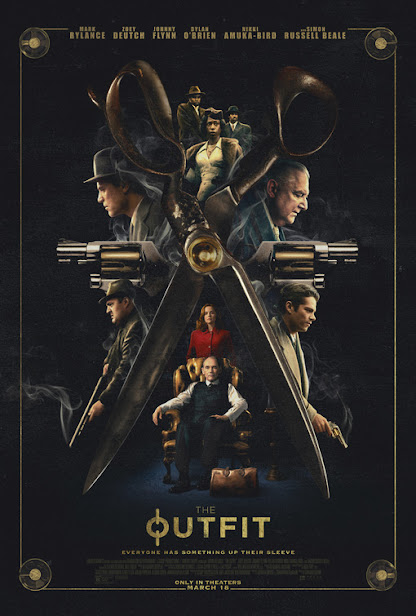 In a recent episode of the This Had Oscar Buzz podcast, there was a comment about Springtime indie movies. The hosts of this podcast reflected that such movies aren’t massive in scale, they don’t dominate the zeitgeist. Think of such titles like Eye in the Sky, Gloria Bell, or Gifted, to name a few from the last decade. They lack in innovation, but they’re often pleasant and deliver just what you want out of a movie for that time of the year. That’s where The Outfit comes into play. It too follows in the footsteps of your average Bleecker Street or Focus Features release from this time of the year by being not a masterpiece, not quite a hidden gem, but a solid piece of moviegoing that’ll deliver on what its target demo wants.

Leonard (Mark Rylance) works as a cutter (not a tailor!) designing suits in a shop in Chicago. Here, his regular customers include local mobsters, most notably Richie (Dylan O'Brien), who use a mailbox in the back to drop correspondence to an organization known as The Outfit. Typically, Leonard keeps his distance from these boys. They don't bother him, he doesn't bother them. One night, though, things change drastically when Richie shows up at Leonard's shop bleeding profusely. Whether he likes it or not, Leonard is now stuck with these mobsters, who are all extra paranoid over there being a rat in their crew. It's gonna be a long night.

Opting to confine The Outfit to one location could’ve been a kiss of death for the entire feature, especially since it’s being guided by first time director Graham Moore. But The Outfit has a not so secret ace up its sleeve: Mark Rylance. Confining viewers with Carrot Top or Adam DeVine in one place for two hours would be torture. Rylance, though? That’s a much different story. Not only is this Oscar-winning performer an enormously gifted talent (save for his miscalculated Don’t Look Up performance), but his extensive experience in stage productions means that he knows how to get a lot out of little resources. Rylance doesn’t need expansive landscapes or an endless series of props to keep your attention. He can capture your attention with subtlest details, especially in his facial expressions. Rylance has such an expressive face, especially in a grin that lights up your soul.

The Outfit turning into the Mark Rylance show is an A-OK development by my book, especially since the playful script by Jonathan McClaine and Graham Moore (the latter of whom also directs) has lots of fun with Rylance being more scheming than he appears. There’s a surprising amount of mileage to be had with the sight of Rylance talking like a kindly fragile old man while delivering dialogue clearly meant to make these paranoid gangsters get suspicious of one another. If your movies going to be this restrained, it’s best when it had these kinds of entertaining ingredients at its beck and call.

On the other hand, the straightforward presentation of this material does lend a lack of unpredictability in some of the big plot turns, which undermines some of the entertainment. Meanwhile, some of the supporting actors inhabit classical outsized gangster archetypes better than others. Visually, Graham Moore doesn’t lend as much visual panache in his filmmaking as a more experienced director might’ve. There's also a final extension to the third act feels like an unnecessary detour. There’s a one really fun action beat in this section of The Outfit, but it’s not enough to erase the feeling that the movie should’ve wrapped up five minutes ago.

These are the most critical shortcomings that keep The Outfit from going above and beyond being perfunctory. Still, it delivers decently on what it should, especially with some lovely looking costumes sprinkled throughout the cast. This is a throwback feature, one whose primary objective is to harken back to simple mid-20th century crime capers. Such creative influences result in a movie that doesn't exceed expectations, but it'll probably meet them if you like either Rylance or gangster movies. but its commitment to simplicity and its best elements make it a fine watch. In other words, The Outfit is a quintessential example of the Springtime indie movie.